Koch-Funded Allies Descend on Wisconsin to Push Right to Work 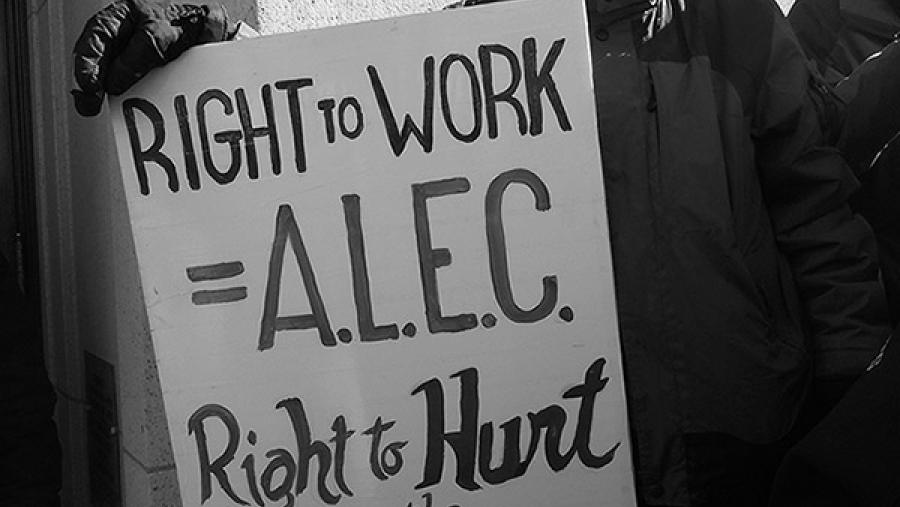 The Wisconsin Senate held a hearing of sorts on the GOP proposal to make Wisconsin a "right to work" state.

The bill pushed by Wisconsin Senate leader Scott Fitzgerald (R-Juneau) bears a striking similarity to the American Legislative Exchange Council "model" bill of the same name (see CMD's side-by-side comparison here). In his opening statement, Sen. Fitzgerald claimed that right to work legislation would "protect every worker" from being forced to join a union. He added that the legislation would save families from being uprooted by having to find non-union employers elsewhere. He presented no data or even anecdotal evidence to support these claims.

The argument that the bill would protect workers from "forced" unionization is a red herring. The U.S. Supreme Court has long stated that nobody can be forced to join a union, or be forced to pay unions dues, or to have their dues go to political campaigns. What current federal and Wisconsin law allows, and what the right to work law would make illegal, are "fair share" agreements and fees in union contracts that make all represented workers, including those choosing not to join the union, contribute to the costs of worker representation on the job.

Sen. Robert Wirch (D-Kenosha) cut through the verbiage: "There seems to be a double standard here. The Chamber of Commerce insists that you pay dues to enjoy the services you provide. Do you care to elaborate?" Fitzgerald did not. The flustered bill sponsor had "no further comment."

Wirch was soon joined by Sen. Chris Larson (D-Milwaukee), who went on the offensive and wanted to know why the bill was being fast-tracked. A coalition of some 400 businesses with unionized work forces have organized to fight the bill, which targets the business relationship between private employers and their workforce.

"Who is this for? Could you give me a couple of names? Perhaps it is a Valentine's gift?" Sen. Larson asked. But Fitzgerald was loath to name names, assuring the overflow crowd of workers protesting the bill that "there are hundreds of names from a variety of different angles."

But Fitzgerald's "hundreds" were nowhere to be seen. The small group testifying in favor of the bill had one thing in common: their deep-pocketed funders. 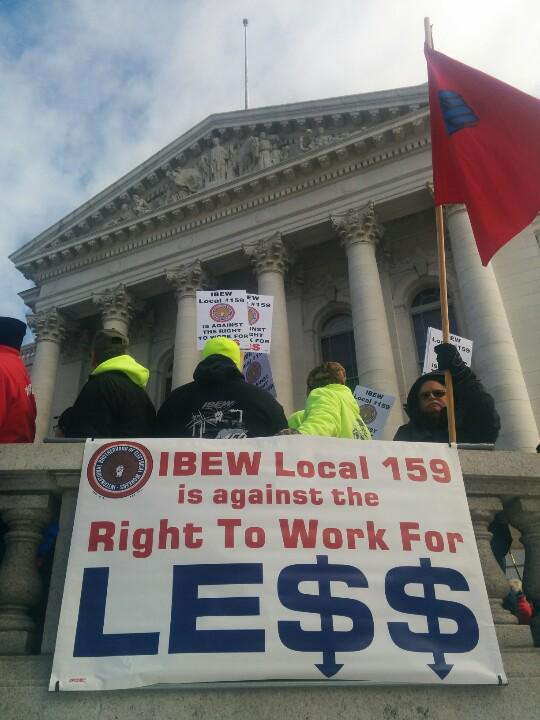 It's a rare citizen who would rush to testify that the higher wages, benefits, and training that unions bring are a bad idea. Fortunately, the Wisconsin GOP had the full support of the Koch-funded "think tanks" that are a critical part of the right-wing infrastructure.

James Sherk, an attorney for the D.C.-based Heritage Foundation, flew out to pile on. Sherk's innovative legal effort to devise a local right to work strategy and peddle it though the American Legislative Exchange Council (ALEC) was featured on the front page of the New York Times recently in an article entitled "Foes of Unions Try Their Luck at the County Level." The Heritage Foundation received $650,000 in 2012 from the Claude R. Lambe Foundation, which was one of the Koch Family Foundations before it closed in 2013. The Lambe Foundation contributed at least $4.8 million to the Heritage Foundation between 1998 and 2012. See our SourceWatch profile here.

Sherk waxed lyrical over the fact that right to work legislation would "drive down labor costs." Sen. Larson translated for the audience: "You say labor costs. You know, I would call that wages."

Greg Mourad from the National Right to Work Committee, which received $1 million from the Koch brothers' secret bank Freedom Partners in 2012, was not keen to discuss where his paycheck comes from.

"Have you never asked yourself why some of the richest people in the country are spending so much money on your group -- people pushing an extreme anti-worker and anti-environment agenda?" Sen. Larson asked Mourad. He had not. The National Right to Work Committee has been a national leader in the effort to destroy public and private sector unions by pushing anti-union legislation at the state and federal level and by bringing lawsuits, such as the 2014 Harris v. Quinn case in the U.S. Supreme Court attacking unions in Illinois. The three groups associated with the Committee reported over $25 million in revenue in 2012. CMD's Sourcewatch profile of the group can be found here.

F. Vincent Vernuccio flew in all the way from Michigan, where workers were "freed" to make lower wages in 2013. Vernuccio works for Michigan's Mackinac Center, one of the largest state-based think tanks in the nation, and part of the $84 million dollar State Policy Network, a sister organization to ALEC. The Mackinac Center received $1,494,000 from the Koch conduits DonorsTrust and Donors Capital Fund between 2010 and 2012. See CMD's SourceWatch profile here.

Last year, Vernuccio masterminded a coordinated campaign attacking teachers in Michigan. Together with the Koch-founded group Americans for Prosperity (AFP) and the National Right to Work Committee, Mackinac released targeted Facebook and Google ads, built webpages, published op-eds in local and state newspapers, and flooded Michiganders with mass mailings and robo-calls -- all with the aim of destroying the teachers' union by creating a mass exodus of members.

There was one Wisconsinite ready to testify. Scott Manley, representing Wisconsin Manufacturers and Commerce (WMC), bemoaned the fact that Wisconsin is lagging in new job creation compared to right to work states (the Bureau of Labor Statistics ranks Wisconsin 32 out of 50 states in new job creation). But just a few months ago, during Walker's campaign for reelection, WMC aired TV ad after TV ad praising Governor Walker for the state's blockbuster economic performance.

As politicians inside pretended to consider the weighty matters brought before them by Team Koch, thousands of workers rallied outside expressing their outrage over the fast-tracked bill.

United Auto Workers 438 leader Sheila Cochran spoke forcefully: "This mess that they are bringing upon the state of Wisconsin is nothing more than a way to divide and conquer us within our workplaces, just like they did it down south,” she said. The idea she said "comes from the segregationist south. This was put in place to prevent white women and white men from having to work with their black brothers and sisters." Cochran knows her history. When the CIO launched "Operation Dixie" in the 1940s to organize black and white workers in the south, the push back was ugly. Texas was the first state to pass right to work in 1947, and segregationists were at the heart of it.

Cochran also spoke on behalf of workers employed in some of the most dangerous occupations in America and the critical training that unions provide their members: "We know why steel is steel. We know why iron workers are iron workers. We know why the UFCW exists. We work in some treacherous trades. We have made them safer. We have done the work that our mothers, brothers, and sisters wanted us to do” to make the nation's most hazardous trades safer for the workers of today.

CMD spoke to sheet metal workers from Milwaukee and Sheboygan who are trained on a continual basis by their unions. "I would like to see what the average person would do standing 40 stories in the air looking down an HVAC shaft. I know what to do. I know what is safe and what is not safe because of my union," said Jeff Lensink from Sheet Metal Workers Local 18, Sheboygan.

"People have to understand that unions are the only voice for the working man. We would never have a 40 hour workweek without unions. We would never have paid vacations or workplace safety rules. These things did not come out of thin air. People had to fight for that," said sheet metal worker Pat Stauss, sporting the hard hat of his trade.

Pam Collins from United Food and Commercial Workers explained why the union was important at her workplace, the Hormel canning plant in Beloit.

Collins explained that there is a lot of heavy machinery and forklifts in her plant, and just last week a worker's hand was injured after a glove caught in fast-moving machinery. "I work on quality control and on the safety committee. Our International has three OSHA safety officers that give us guidance on how to make the workplace safer, and I have been to three trainings in three different cities this year that taught us about safety hazards and how to take care of those hazards, rather than simply disciplining the employee."

As night fell, the "experts" flown in by the Wisconsin GOP to support the extreme agenda had left the building. But the hearing continued on as Wisconsinite after Wisconsinite stood up to testify against the bill.

Jonas Persson contributed to this report.

The left is on the wrong side, the anti w0rker side on this. The right to work movement restores the right to choose union membership to working people. That's all it is. There are some powerful wealthy interests who gain from forcibly extracted dues money who oppose this. Pass right to work across the nation. Let unions thrive because workers want to be in them. not because they are forced to against their will and interest. There is nothing "extreme" about this idea. No one forces you to join the NRA, do they? Is it "extreme" to prevent them from forcing you to?
Your comments are absolutely contrary to fact. I'm a 65 year old small business owner, not a Union member. Unions are the reason America became the greatest economic power on Earth following Republican Teddy Roosevelt standing up for the right to organize in 1912, when he left the Republican Party and formed the PROGRESSIVE PARTY. As the Kochs, WAL MART, the US Chamber, the NAM, and a few other Anti worker Right Wingnuts have succeeded in crippling labor unions, our standard of living has fallen compared to Europe, for example. Germany has a strong middle class because 27% of Germany's work force is Unionized. In America, we have fallen from 27% to 11%, mostly since Reagan busted the air traffic controllers Union. The "Right to Work" (for less) states are the POOREST, sickest, most violent crime ridden lowest average IQ and POOREST educated in the nation. In Oklahoma, then Gov. Frank Keating promised the state there were "dozens of companies" which would provide " thousands of good jobs" LINED UP ON OUR BORDER and would open plants here if we would approve "Right to Work." The Republican Senate leader who spearheaded the Right to work law is now CEO of the state Chamber, a Republican propaganda Lobby. He was asked about 3 years ago specifically which companies moved to Oklahoma and how many jobs they created. He COULD NOT NAME ONE SINGLE COMPANY OR JOB which moved here after Right to Work was passed. Governor Keating, it seems, was a big fat liar Our economy is still based on agriculture and oil and gas. Tens of thousands of jobs are being lost because of low energy prices and two of our largest employers are on the edge of Bankruptcy. . Costco wanted to open 20 stores in Oklahoma if only our arcane liqour laws were changed, since Wine Sales are illegal in anything other than Liqour Stores here. Costco would employ thousands at a starting wage of over $14 per hour plus full benefits, but bass backwards Republican legislature and Governor evidently don't want Costco here, because they would force other retailers to also pay a living wage.