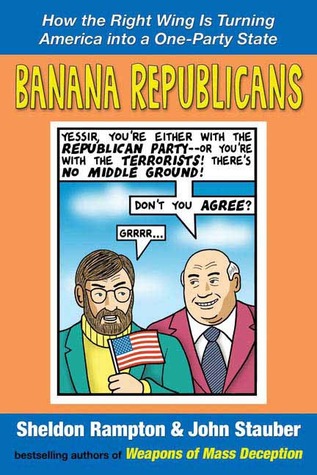 by Sheldon Rampton and John Stauber

"Rampton and Stauber are two of America's bravest, finest journalists. Their work is essential reading for anyone who wants to understand how greedy corporations and their allies in government now wield power in the United States."

Banana Republicans is the latest book by Sheldon Rampton and John Stauber of the Center for Media and Democracy. The bestselling authors of Weapons of Mass Deception lay bare how the "right-wing conspiracy," as represented by the national GOP and its functionaries in the media, lobbying establishment and electoral system, is undermining dissent and squelching pluralistic politics in America.

For the first time since 1932, the Republican Party controls every major institution of the federal government: the White House, the Supreme Court, the Senate and the House of Representatives - not to mention the "fourth branch of government," the mass media. How did this come to pass? Banana Republicans reveals how the GOP leadership maintains its hold on power through the systemic manipulation of the electoral system, the media, the lobbying establishment, and the political culture at large. The book examines:

INTRODUCTION: The War at Home

CHAPTER 1: The Marketplace of Ideas