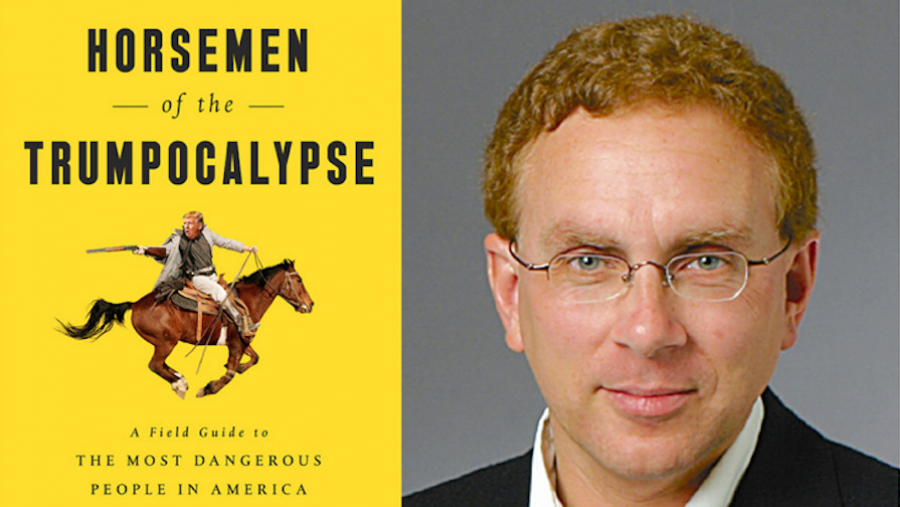 Hot off the press is John Nichol’s new book HORSEMEN OF THE TRUMPOCALYPSE A Field Guide to the Most Dangerous People in America. The book details the wrecking crew with the power to make our country and our world a much more dangerous place.

Learn about Robert and Rebekah Mercer “The Investors,” the “King of Voter Suppression” Kris Kobach, the Koch Brother Mike Pompeo, the Kingfish of the Quagmire Tom Price, and “Secretary of Gentrification” Ben Carson.

And what can be said about Attorney General Jefferson Beauregard Sessions III that hasn’t already been said by David Duke?

You can buy the book at a local bookstore, but we are asking you to buy it though us to support CMD’s investigations. Covering Trump has depleted our budget because there is so much corruption and collusion to unravel. Please give what you can to help fight back!

WHAT FOLKS ARE SAYING ABOUT TRUMPOCALYPSE

“John plays an extraordinarily important role….  He is everywhere. He is an incredible writer.”

“The Trump horror show is overshadowing the gang of kleptocrats propping him up. They’re waging a methodical war on the vast majority of Americans and on the planet we share. This is a crucial guide to get ready to stop them.”

—Naomi Klein, author of No Is Not Enough and This Changes Everything

“This is the real story of the Trump administration—not what Trump is tweeting but what his appointees are doing to undermine civil rights, economic security and the environment. John Nichols gets behind the scenes, finds the truth and reveals it all.”