Before the Heartland Institute became famous for its leading role in climate change denial, the group spent many years working to defend the tobacco industry. Just as the group is now known for its over the top attacks on climate scientists, Heartland once played a large role in criticizing public health experts and others calling attention to the dangers of cigarette smoking.

The State Policy Network (SPN), a web of right-wing "think tanks" in every state across the country, has close ties with the tobacco industry. When tobacco companies like Reynolds American or Altria/Philip Morris want to avoid tobacco taxes and health regulations, reports by SPN groups in many states can help inspire local resistance.

Think Wisconsin Governor Scott Walker and special interests supporting him spent a lot in the Wisconsin recall race, at $45 million? Well, tobacco companies spent even more to defeat the ballot measure to raise California's cigarette taxes. How much? $47 million.

The ballot measure, Proposition 29, would have raised California's cigarette tax from its current 87 cents a pack -- half the national average -- to $1.87 a pack. This would still only have been the 16th highest cigarette tax in the country. The revenue created would have financed cancer research and smoking prevention programs.

In the 1970s, Nordic countries were among the first to adopt policies against tobacco, like bans on cigarette advertising, health warning labels and smoke-free laws, but U.S.-owned tobacco companies, and particularly Philip Morris, makers of Marlboro, became concerned such polices could spread to America and other developed countries where they sold cigarettes. Also, Europe's first product liability case against the tobacco industry occurred in Finland in 1988, when a smoker sued several companies claiming their products caused his illness, causing even more concern for global tobacco companies. To help escape product liability claims, Nordic tobacco companies -- like Amer Tobacco and Rettig, which distributed Philip Morris and R.J. Reynolds brands, respectively -- long claimed to be ignorant of, and denied participation in the multinational tobacco companies' global strategies to undermine anti-tobacco policies, but industry documents reveal the truth -- that smaller Nordic tobacco companies did, in fact, participate in the multinational companies’ long-time conspiracy to deny the health dangers of smoking and undermine anti-tobacco policies, helping delay key effective tobacco control measures, and particularly smoke-free laws, for years.

Republican presidential candidate Herman Cain's new internet ad features a tight head shot of his campaign's "chief of staff," Mark Block, telling viewers how great Cain will be for the country and how much confidence he has in Cain. In the ad, Block looks directly at the camera, says, "We've run a campaign like nobody's ever seen." Then, at the 40-second mark in the 56-second political spot, Block unexplicably takes a long, prominent drag from a lit cigarette and then exhales, blowing the smoke directly at the viewer. The ad highlights Cain's connections to the tobacco industry, and Block's position in the campaign belies Cain's connections to David Koch. Until earlier this year, Block was the long-time leader of the Wisconsin arm of the David Koch-funded astroturf group, Americans for Prosperity (AFP), following a scandal that barred him from electoral politics for a time. A number of Cain's other aides have also worked for AFP, and Cain's old work and email addresses used to be with the Koch group. But what's the cigarette connection? 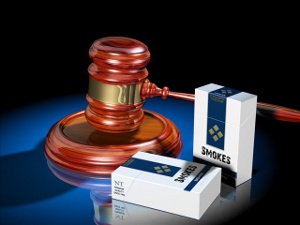 The House Appropriations Committee voted to approve an amendment introduced by Rep. Denny Rehberg (R-Montana) that would immunize the tobacco industry against U.S. Food and Drug Administration (FDA) rules stopping them from making cigarettes more addictive and marketing them to children. Among other things, Rehberg's amendment restricts FDA's authority to regulate the use of menthol in cigarettes. An FDA Scientific Advisory Committee concluded last March that menthol added to cigarettes makes them more attractive of children, increases the number of kids who start to smoke and reduces the number of smokers who can successfully quit. The Rehberg amendment also blocks FDA from regulating ammonia in cigarettes, which tobacco companies add to speed the the bodies' absorption of nicotine. Rehberg's amendment is aimed at weaking the landmark 2009 law giving FDA authority over tobacco products. Members of the Appropriations Committee who voted in favor of Rehberg's amendment together accepted $289,927 in tobacco industry campaign contributions in the last election cycle compared to just $10,000 taken by those who opposed the amendment -- a 20-fold difference.