Facebook event can be found here.
M&I Bank got a $1.7 billion bailout while working people get sold out. Their CEO got a golden parachute of $18 million only to turn around with his M&I Bankster cronies to be the largest contributors to Scott Walker's campaign.

Working people are fed up with big banks and the attacks on working families. We're not going to take it anymore.

On the day that the bill passed the Wisconsin Assembly effectively ending 50 years of collective bargaining in Wisconsin and eviscerating the ability of public unions to raise money through dues, a new front opened in the battle for the future of Wisconsin families. 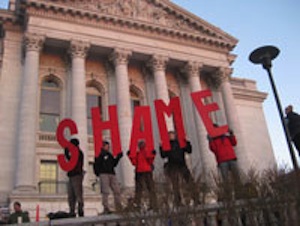 Bagpipes blaring, hundreds of firefighters walked across the street from the Wisconsin Capitol building, stood outside the Marshall and Ilsley Bank (M&I Bank) and played a few tunes -- loudly. Later, a group of firefighter and consumers stopped back in at the bank to make a few transactions. One by one they closed their accounts and withdrew their life savings, totaling approximately $190,000. See a video clip. After the last customer left, the bank quickly closed its doors, just in case the spontaneous "Move Your Money" moment caught fire.

According to its newly-minted website, the Advocates "are dedicated to supporting the University of Wisconsin-Madison ... [and] will promote greater accountability through enhanced autonomy for this unique institution." This lobbying effort is similar to efforts afoot in other states to use state budget issues to privatize public higher education institutions and put more assets and power at the disposal of powerful corporate interests.

NPR's Planet Money recently reported on astroturf activities in the financial sector. "Forgery: The Latest Tactic To Sway Finance Rules" focuses on the behind the scenes fight over the implementation of the Dodd-Frank Wall Street reform bill. The Dodd-Frank bill is now in the agency rulemaking stage and financial sector lobbyists have descended en masse on the pertinent federal agencies, lobbying in person and via comment letters to the Federal Register. Some firms seem to think their advocacy would be more effective if it came from grassroots groups and not corporations. As NPR reports: "In an effort to influence the new rules, somebody sent several forged letters to the Commodities Futures Trading Commission, a key government agency. The letters were sent as part of the public comment process for an arcane rule that could have big financial implications." The rule involved proposal to limit conflicts of interest at derivatives clearinghouses. The forged letters were supposedly from an exec at Heinz (the food company), a Burger King franchise owner, a local judge, a county sheriff and a dozen other concerned citizens. But in reality they were sent from a PR firm on contract with an unnamed client. The Wall Street Journal has named the PR firm as Dewey Square Group and its subcontractor, Goggans Inc. as culprits in the fiasco, but the firm's client is still unknown. The faux letters contain verbatim language railing against the "cartel-like control" of banks in the derivatives market, certainly a legitimate complaint. The fact that financial services firms -- perhaps those who want the opportunity to be part of the cartel -- had to hire PR companies to develop fake "grassroots" to counter the big banks underscores the continued absence of real, organized grassroots in the financial services debates. One notable exception is Americans for Financial Reform (AFR) a coalition of over 250 of labor, consumer, housing, and other public interest groups, that advocates for consumer protection and a more stable and secure financial system. Find out more at Ourfinancialsecurity.org.

Most Americans know American International Group (AIG) as the global insurance behemoth that was so recklessly managed it had an outsized role in tanking the global economy.

Rather than feeling a bit humble for wreaking havoc on the lives of millions, AIG's new management is feeling rather cocky. Apparently AIG CEO Robert Benmosche has figured out the magic formula for selling insurance. Benmosche told Bloomberg News that he likes to do business in "red states" where the firm signs up more reliable customers than those in "more liberal" areas.

Earnings and bonus reports are rolling in and the big, bailed-out banks are back in the black. In 2010, total compensation and benefits at publicly traded Wall Street banks and securities firms hit a record of $135 billion -- up almost six percent from 2009 according to the Wall Street Journal. JPMorgan Chase CEO Jamie Dimon may take home the biggest bonus check, an eye-popping $17 million.

In a savvy move, the new Consumer Financial Protection Bureau launched its first website today. The CFPB was created by the passage of the Dodd-Frank Wall Street reform bill in July 2010 and is headed on an interim basis by well-known consumer advocate, Elizabeth Warren. 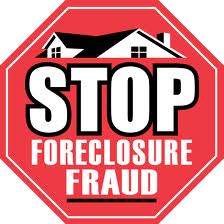 Rumor has it that the 50-state attorneys general investigation into the Fraudclosure scandal is wrapping up. It's time for a backbone check. Will the state attorneys general just ask the big banks and service providers to turn over a chunk of change from seemingly bottomless pockets? (This strategy was pursued by the Security and Exchange Commission (SEC) with little impact). Or will Iowa Attorney General Tom Miller take the lead in wrestling a real settlement out of the banks, so that families hammered by unemployment and underemployment can stay in their homes?

In 2010, banks initiated 3 million foreclosure filings. Total foreclosure filings could reach 9 million in 2011. In any civilized nation, the forcible migration of a city the size of New York would be treated for what it is -- an economic and humanitarian catastrophe. Attorneys General in every state are now actively investigating this FRAUDCLOSURE. Write to the lead investigator, Attorney General Tom Miller of Iowa, today.