While volunteer after volunteer from each of Wisconsin's 72 counties marched into the state's election board to deposit over one million signatures for the recall of Wisconsin Governor Scott Walker, Walker was nowhere to be found.

At the hour petitions were being deposited on January 17, Mother Jones revealed that Walker was scheduled to attend a high-dollar fundraiser in the heart of the New York's financial district at 339 Park Avenue -- the towering headquarters for global financial giant CitiGroup. The $5,000 per couple fundraiser was hosted by none other than Maurice "Hank" Greenberg, former CEO of AIG. 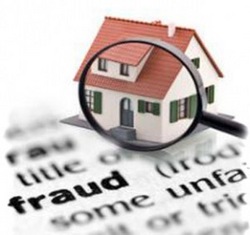 Lender Processing Services, Inc. (LPS) of Jacksonville, Florida -- one of the most notorious processors of fraudulent home foreclosure documents in the country --  has donated 1,000 tickets for a professional football game between the Jacksonville Jaguars and the San Diego Chargers to Jacksonville Area USO. After the 2008 economic bust, LPS subsidiary DocX churned out huge numbers of fraudulent foreclosure documents for the country's biggest banks, including Wells Fargo, HSBC, Deutsche Bank, Citibank, U.S. Bank and Bank of America, which resulted in countless Americans being wrongfully thrown out of their homes. DocX hired boiler rooms full of people, some of whom were high school students, and paid them $10 an hour to fraudulently robosign the name "Linda Green" onto hundreds of thousands of foreclosure documents, and then hired notary publics to falsely notarize the fake signatures. "Linda Green" was later found to be listed as vice president of over 20 banks and multiple "Linda Greens" were featured in a 60 Minutes investigation. LPS denies responsibility for the massive fraud, preferring instead to let two DocX employees take the fall for the entire debacle. On November 28, 2011, Tracy Lawrence, a Las Vegas notary public who had agreed to testify against the two DocX employees, was found dead in her home on the day she was to testify. LPS says the ticket donation is a "perfect way for us to help the courageous members of our armed forces enjoy some much-needed relaxation and to show our continued support for the Jacksonville Jaguars and our city."

The U.S. House of Representatives votes soon on a series of deregulatory bills that, according to the Coalition for Sensible Safeguards (CSS), "threaten vital health, environmental, safety and financial regulations."

Voting is expected on the Regulatory Accountability Act (H.R. 3010) and the Regulatory Flexibility Improvements Act (H.R. 527) on December 1, and on The Regulations from the Executive in Need of Scrutiny (REINS) Act (H.R. 10) next week.

Representative Gerry Connolly (D-VA) calls these bills "an early Christmas present to the Koch Brothers, who made this Congress possible."

In the dead of night November 14, the movement to hold big banks accountable for their crimes took two major hits. Occupy Wall Street activists were swept from Zuccotti Park as radical members of Congress moved to gut funding for the Commodity Futures Trading Commission (CFTC) and advance a series of shocking proposals to roll back financial reform. 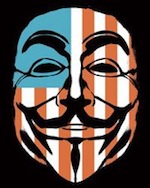 November 5th is "Bank Transfer Day," a hopping Facebook campaign urging Americans to move their money out of big national banks and into local banks or credit unions.

Kristen Christian, a 27-year-old Los Angeles art gallery owner, organized the effort after Bank of America (BofA) issued a new $5 monthly fee to debit card users that would be implemented in early 2012. The fee targets those who have less than $20,000 in Bank of America accounts. The "Bank Transfer Day" movement cites this as a direct attack on the impoverished and working class. BofA is also a notorious foreclosure mill, doing little or nothing to help their clients facing foreclosure. The Bank Transfer Day Facebook page has 35,000 likes and support for the movement is growing by the second.

After two tours of duty in Iraq, 24-year-old Wisconsin native Scott Olsen managed to escape unscathed and with seven medals for valor. But Olsen was critically injured in an Occupy Oakland march last week by a police projectile. According to eyewitnesses, Olsen was acting as a human barrier between unarmed civilians and Oakland police in riot gear who were charged with keeping a public park cleared for sanitation purposes.

Whether this was a case of an inexperienced Mayor (check) or a historically aggressive police department (check), the incident underscored the potential for catastrophe as cops increasingly confront peaceful protesters with riot control weapons. 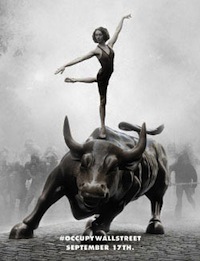 U.S. Senator Paul Wellstone used to say "sometimes you have to pick a fight to win one."

But it won't stay contained in Zuccotti Park. While Brookfield Properties called the park a "public sanctuary" in 2005, they have apparently changed their minds. Mr. Zuccotti wants his park back and the police are preparing to clear it with new rules barring camping, sleeping and breathing.

They are too late. The train has left the station and the Occupation is on the move. From Manhattan to Hawaii big bank protests are planned. Everyone who cares about creating an economy that works for working people should get on board.

Consumer advocate Elizabeth Warren announced that she was running against Scott Brown for a U.S. Senate seat in Massachusetts on the eve of the anniversary of the Lehman Brothers collapse. For many, Lehman's unthinkable bankruptcy September 15th, 2008 marks the day when the wheels came off the bus and the U.S. economy went over a cliff.

With 30 million Americans unemployed and underemployed, Social Security, Medicare and public workers under attack, Warren's video announcement got straight to the point.

"Middle-class families have been chipped at, hacked at, squeezed and hammered for a generation now, and I don't think Washington gets it. Washington is rigged for big corporations that hire armies of lobbyists," she continued. "A big company like GE pays nothing in taxes and we're asking college students to take on even more debt to get an education, we're telling seniors they may have to learn to live on less? It isn't right, and it's the reason I'm running for the U.S. Senate." 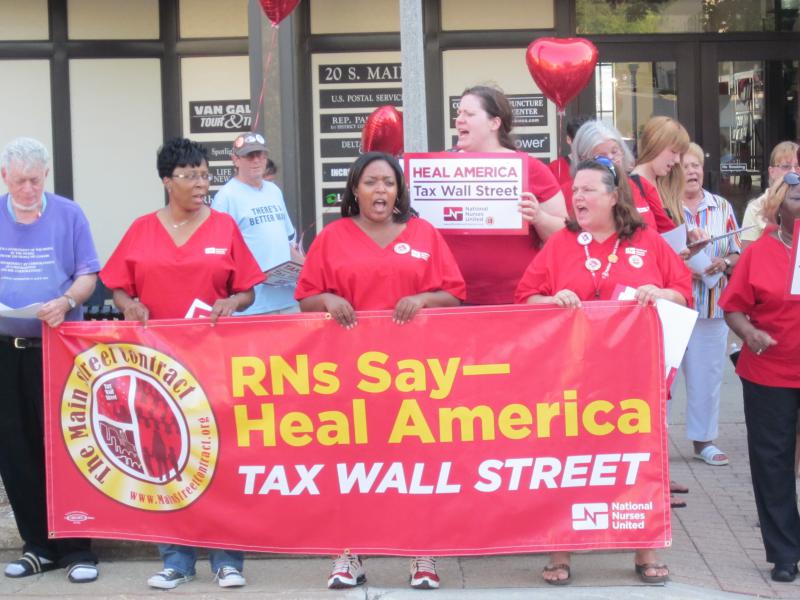 As President Obama gets ready for his big jobs speech Thursday, America's nurses have a message for him. "Heal America, Tax Wall Street!" the signs read as nurses rallied in front of 61 Congressional offices this week. The nurses are proposing a bold alternative to the "cut, cut, cut" rhetoric emanating from Washington, D.C.

Their proposal? "It's time for the Wall Street financiers who created this crisis and continue to hold much of the nation's wealth to start contributing to rebuild this country and for the American people to regain their future," explained Rosanne DeMoro, Executive Director of National Nurses Union (NNU), in a press release. The nurses are joining groups across the nation and around the world who are calling for a financial transaction fee on high-volume, high-speed Wall Street trades, to tamp down dangerous speculation and to raise revenue for heath care, jobs and other critical needs.