After two tours of duty in Iraq, 24-year-old Wisconsin native Scott Olsen managed to escape unscathed and with seven medals for valor. But Olsen was critically injured in an Occupy Oakland march last week by a police projectile. According to eyewitnesses, Olsen was acting as a human barrier between unarmed civilians and Oakland police in riot gear who were charged with keeping a public park cleared for sanitation purposes.

Whether this was a case of an inexperienced Mayor (check) or a historically aggressive police department (check), the incident underscored the potential for catastrophe as cops increasingly confront peaceful protesters with riot control weapons.

Did they even consider mops and brooms?

"There had to be a more civil way of meeting the challenge of dealing with these people who wanted to occupy that space than to kick people's heads around when they have valid concerns about society, what we're doing and where we're going," said Olsen's uncle George Nygaard.

A member of Iraq Veterans Against the War, Olsen had a good job and a busy life in San Francisco. But he visited Occupy Oakland every night because he fought to protect people's right to protest and "he felt corporations and banks had too much control over our government, that they weren't being held accountable for their role in the economic downturn," according to his roommate.

After exercising his first amendment rights, he remains hospitalized with a fractured skull unable to speak.

Confrontations and Arrests on the Rise

As Occupations spread across America, the arrests are starting to mount: 700 on the Brooklyn Bridge, 300 in Chicago's Grant Park, 130 people on Boston's Rose Kennedy Greenway, 39 in Portland, 38 in Austin, 16 in front of the Mortgage Bankers Association, 11 in front of JP Morgan Chase, and 22 at Citibank. The majority of arrests are for trespassing on public -- not private -- property. Thirty-two farmers and community folk were arrested in Iowa for refusing to leave the State Capitol grounds.

The number of arrests is certain to increase. So is the number of injuries. It's time for a law enforcement gut check. Are you arresting the right people, for the right reasons? Are pepper spray, horses, batons, tear gas and riot gear the way to approach peaceful protesters?

The Center for Media and Democracy (CMD) recently conducted a series of interviews with Wisconsin law enforcement on what some call the "original occupation" of the Wisconsin Capitol in the winter of 2011. They offer some thoughts on positive policing techniques that work. 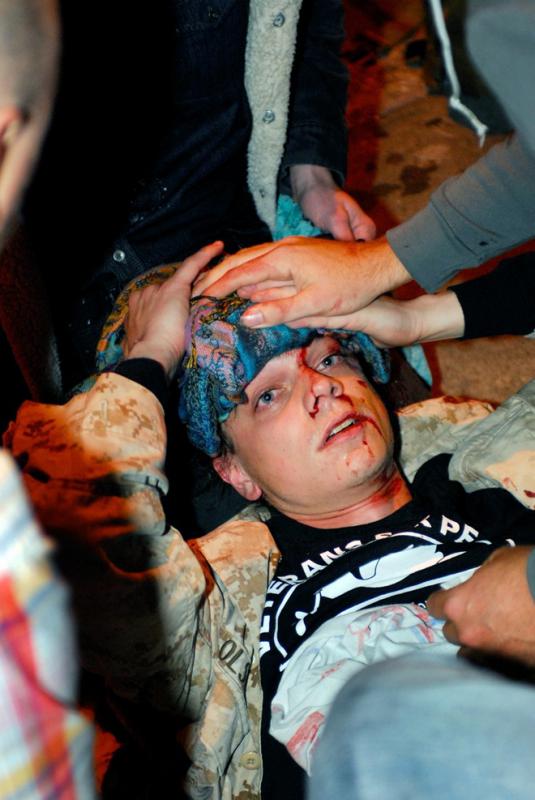 On February 11, 2011, Wisconsin Governor Scott Walker introduced a bill that would limit the collective bargaining rights of public employees, require 100% voter participation in union recertification and end the state's practice of withholding and reimbursing union dues. The bill was perceived as a death blow to public employee unions and prompted massive, sustained and peaceful protests inside and outside the Wisconsin State Capitol in the winter of 2011.

Sheriff Dave Mahoney was elected to represent Dane County, which surrounds Madison. He was part of the command team that was set up to deal with the protests and ensure public safety. Thousands occupied the Capitol day and night for over two weeks. Hundreds of thousands surrounded the Capitol each weekend. For many it was a very emotional issue. Scott Olsen was one of many vets present who marched in solidarity with Wisconsin workers.

"The number one direction that was provided by Chief Tubbs of the Capitol Police Department, Chief Wray of the Madison Police and myself was that we were going to ensure that it was a safe gathering, and that we were not going to be protecting marble; we were going to be protecting people's rights to assemble and their right to free speech," said Mahoney. Mahoney also thought it was important that his deputies were well-trained for highly charged situations. His deputies in their plain brown uniforms maintained a friendly presence on the Capitol grounds.

According to Mahoney, "this was a momentous occasion -- not only in state history, but one that will go down in national history and probably internationally. The goal of law enforcement was to protect the rights of the people, while at the same time ensuring a safe and orderly gathering and allowing normal business to go on. I think how things took place in Madison, Wisconsin is an example of how law enforcement can successfully achieve both goals, not only in this state but across the country."

Hot Heads and the Police State

As the occupation moves across the country from big towns to small, numerous instances of police overreaction have been documented. On September 24, New York Deputy Inspector Anthony Bologna brushed past colleagues to attack five women who had already been corralled by police officers in orange plastic netting. He pepper sprayed the young women, who were unarmed and barely dressed. They dropped to the ground screaming in a disturbing video viewed by hundreds of thousands on YouTube.

Mace and pepper spray were used on a small crowd of older protesters at the State Capitol in Iowa, simply to clear the Capitol grounds. More Iraq veterans were beaten when Boston police cleared protesters out of a public park. On October 14, police in riot gear descended on Occupy Denver protesters in the wee hours of the morning to clear them from a public park across from the State Capitol. Twenty-three people were arrested.

Gina Ray, is a 20 year veteran of the Governor's security detail of the State Capitol Police force. In an interview with CMD, Ray says she thinks a lot of problems can be avoided.

As a senior officer who had to deal with thousands of Wisconsin protesters as they streamed up to the Governor's office beating drums, blowing horns or simply leaving notes, Ray kept her cool and looked for fellow officers who would be successful in that type of situation. "We had backup coming in from all over the state. Each day when I was given five new troopers, I'd give them this little quasi-lecture; the biggest part of my lecture was, 'If you don't think that you are them, then you shouldn't be standing there with me.' Some got it, some didn't. The ones that didn't, didn't last long. We had to be on the same page," said Ray.

She also thought it was important that leadership set the right tone. Speaking about her boss, Chief Tubbs of the Capitol Police, Ray noted that: "He was successful in bringing this to a peaceful conclusion, because he is a very compassionate person and when he touches your hand or looks you in the eye, you know he's for real. It's very unusual for a police chief to be that honest and direct. He establishes trust with everyone he deals with."

Protesters Have Responsibilities as Well

The members of the University of Wisconsin's Teaching Assistants' Association (TAA) were some of the first to whip out their sleeping bags, plug in their computers and camp out at the Capitol. At the time, Peter Rickman, was the TAA co-president. He told CMD that the protesters in the Wisconsin Capitol did a lot of things that aided in a peaceful, successful outcome.

"From the first day, we opened up a line of communication with the police," said Rickman. As the occupation continued, this developed into regularly scheduled meetings on a daily basis and designated spokespeople on both sides.

In addition, "Protesters need to create and maintain a culture of nonviolent civil disobedience and project that actively," says Rickman. "We explicitly embraced the role of nonviolent resistance in our history" and made it clear to the police that "we were marching in the footsteps of Dr. Martin Luther King."

With these ground rules, protesters were able to invite workers, families, kids and even grandmothers to the safe space created in the Capitol. In the end, hundreds of thousands took to the streets around the Capitol. "We could not be evicted because we had so many people backing us," says Rickman.

No Banker Has Yet Done a Perp Walk

While law enforcement has been quick to corral and arrest the rabble, it is still true that not a single employee of a major American bank has gone to jail for wrecking our economy. Instead they have dodged harsher justice by settling charges of serious wrongdoing with the Securities and Exchange Commission time and time again. (See the list here).

The Occupy Wall Street camps do not create social ills, they showcase them. There is no doubt that the camps are a form of protected free speech.

Elected officials and police forces need to take a deep breath and gain some perspective. The Wall Street bankers have done far more damage to cities and counties by tanking the economy and local tax receipts than a few hundred protesters could ever do.

"...with seven metals..." Not. It's seven "medals". Geez, who's your editor?
Apparently, YOU are! Thanks for reading our work so carefully. ;)