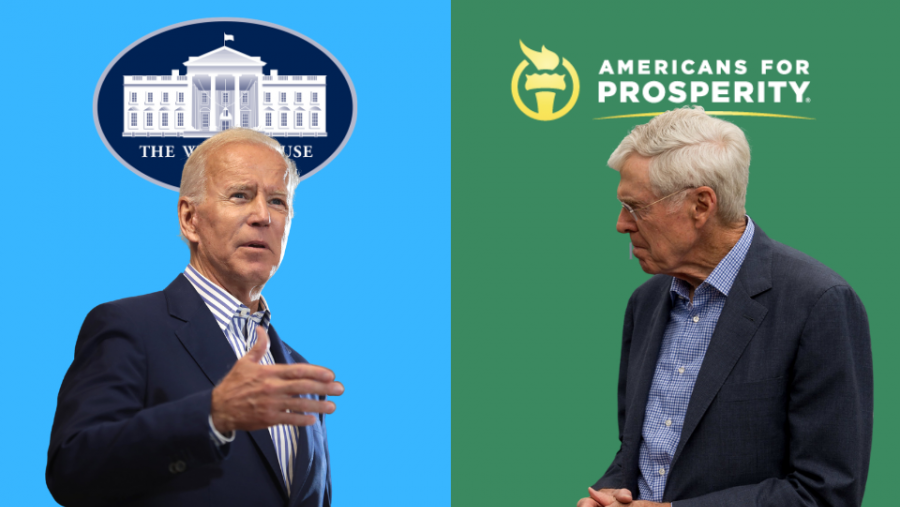 Charles Koch's Americans for Prosperity (AFP) announced a multi-million dollar grassroots campaign to drum up nationwide opposition to President Biden's infrastructure plan, even as its final details remain unannounced.
The campaign targets 27 U.S. House Democrats in swing districts and will use social media advertising, phone calls to constituents, direct mail, and rallies in over 100 cities to denounce the plan.

This strategy likely foreshadows a plan of attack that AFP's affiliated super PAC, AFP Action, will utilize next year as these Congress members campaign for re-election.

AFP, a political nonprofit with affiliates in 38 states, is Koch's premier astroturf organization, activating people to oppose public sector unions, expanded health care, and environmental standards. Its budget, which is supported mostly by the Koch-funded Stand Together Chamber of Commerce, was $57 million in 2019.

The infrastructure plan's latest price tag is now $1.7 trillion, with Biden having cut out $500 billion in a failed attempt to win GOP support.

AFP calls the program wasteful and says much of the money has nothing to do with infrastructure.

The right-wing advocacy group is attempting to gin up fear that the spending plan will increase the deficit, although it lobbied hard for Trump's tax cut for corporations and the wealthy in 2017, spending $20 million largely on TV and social media directed at recalcitrant members of Congress. The nonpartisan Congressional Budget Office projected that those tax cuts will add $1.9 trillion to the federal deficit by 2028, but the Koch network had no concerns about the deficit at the time.

In 2018, the first year after the Trump tax cuts, one study found that 91 Fortune 500 companies paid $0 in federal taxes.

AFP opposes the infrastructure plan in part because of the tax increases required to pay for it. However, a CBS poll found that 71% of Americans support raising taxes on corporations and the wealthy to fund it.

If Democrats reverse Trump's tax cuts, both Koch and his private company, Koch Industries, would be subject to higher tax rates.

Koch's nonprofit claims that only slightly more than one-third of the public supports the Biden plan. But the source of that statistic is a CNBC poll conducted soon after the plan was announced, before key details were announced and before Biden cut $500 billion from the program. The more recent CBS poll found 58% support for the plan.

Many of the 27 House members currently targeted by AFP were electoral targets of the AFP Action super PAC in 2020. AFP appears to be laying the groundwork for another attack on those Democrats, many who narrowly won their seats, in next year's elections.

Tim Phillips, president of AFP, kicked off the group's campaign in Des Moines, Iowa, targeting Cindy Axne, whom AFP campaigned against in the 2018 and 2020 elections. She beat incumbent Rep. David Young in 2018 and defeated him again in a close 2020 rematch.

Addressing Axne, Phillips said, "Let's rein this in and here's the chance for you to vote no and show your district that you're not just kind of a partisan, hard-left politician but you're actually looking through the impact on the folks back home."

AFP Action spent over $90,000 on canvassing, direct mail, and digital advertising to benefit Young in 2018.
Other vulnerable Democratic representatives that AFP is targeting include Abigail Spanberger of Virginia and Ron Kind of Wisconsin.

AFP has a three-pronged approach to its policy and electoral work.

It attacks typically Democratic members of Congress for their support or opposition of a policy, as it did with many of President Obama's programs, especially the Affordable Care Act (or Obamacare) and efforts to reduce greenhouse gases. Then its political spending groups use similar messaging to run ads attacking those members during elections, while the Koch Industries political action committee donates to their Republican opponents' campaigns.

AFP Action, which is largely funded by Koch's organizations but also by other wealthy individuals, was launched months before the 2018 midterms as "a new tool to build broad policy coalitions in Congress to help advance AFP's vision," reported CNN. Super PACs can spend unlimited funds on elections.