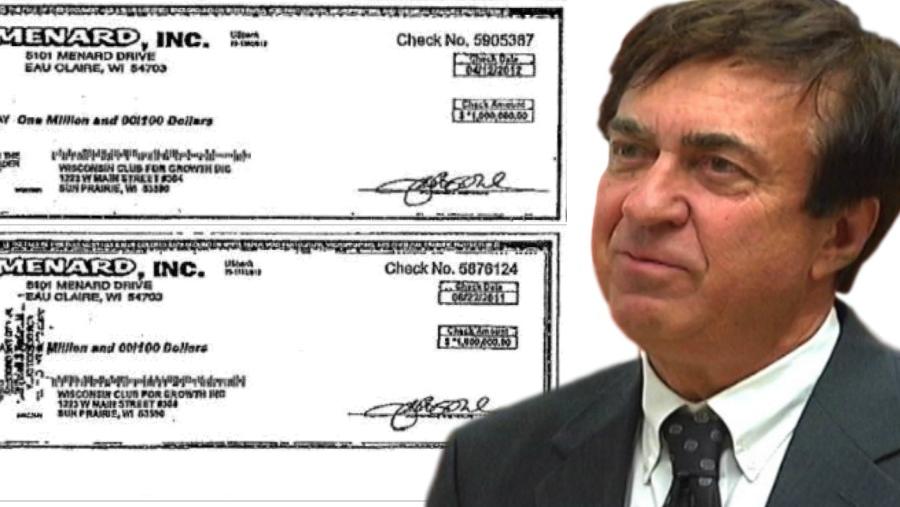 Documents released by the Guardian indicate that Wisconsin Governor Scott Walker may have solicited and received corporate checks for the 2011 Senate recall fight and his own 2012 recall election.

The checks--cut from corporate treasuries, not granted by individuals--were deposited into the account of the dark money group Wisconsin Club for Growth, which prosecutors viewed as a "subcommittee" of Walker's campaign in violation of the statutes (11.10 (04)) as they were written at the time.

Moreover, it appears that Walker and the GOP-controlled legislature later took actions to benefit a number of these secret, corporate contributors and the public was none the wiser.

The Guardian expose focused on the shocking story of one corporate giver, lead pigment manufacturer Harold Simmons, who gave a $500,000 corporate check on top of $250,000 in personal contributions and was rewarded with a change to the law which would retroactively cancel the lawsuits of 173 children poisoned by lead paint. But other corporate donors got special treatment as well.

Wisconsin has had an absolute ban on corporate contributions in politics since 1905, when Republican Governor "Fighting Bob" LaFollette and the Wisconsin legislature were battling the corrupt stranglehold of railroad and timber barons on state government.

Wisconsin's corporate ban, 2011 Wis. Stat. Sec. 11.38, bars any foreign or domestic corporation from making "any contribution or disbursement, directly or indirectly, either independently or through any political party, committee, group, candidate or individual for any purpose other than to promote or defeat a referendum." Violators could be subject to significant penalties many times what they contributed (11.60 (3)). In addition, no "political party, committee, group, candidate or individual" could accept any contribution prohibited by this section of the statutes or they could be found guilty of a Class I felony and the statute even provides for a forfeiture of a candidates right to office. (11.38 (1 ) (b) and 11.61 (1) (b) 11.61 (3) (a)). Citations are to the law in effect at the time.

In 2015, the legislature made extensive changes to the campaign finance chapter, but did not make those changes retroactive.

There were ways for corporate interests to give legally, such as registering a PAC or conduit, but these vehicles needed to be registered with the state and were subject to limits and disclosure, the bedrocks of a transparent campaign finance system.

At the time of the recall elections, corporations could also give to outside spending groups, as long as those groups were acting independently of the candidate.

Walker knows the rules governing corporate checks. Aside from a brief stint after college as a fundraiser, Walker has been a career Wisconsin politician.

Included in the new documents is a never-before-seen snippet of an interview with Walker conducted by prosecutors related to John Doe I dated March 22, 2012, where Walker is asked about corporate checks and indicates that he knows quite well they are barred. Walker is asked what his finance committee was soliciting for his first gubernatorial race, small donors, middle donors, corporate donors? "Yeah, it would vary," responds Walker, but "It wouldn't be corporate donors." "'Cuz you can't do that." (Ex. 99, 1-100 doc.)

But documents indicate that Walker was the chief fundraiser for the secretive Wisconsin Club for Growth during the recall period and corporate checks were a major part of the fundraising strategy for the 2011 recall elections and for Walker's own recall.

The corporate solicitation strategy was made clear in dozens of emails and talking points prepared for Walker by chief fundraiser Kate Doner.

05/04/2011 Doner talking points for Walker tell him to ask Karl Rove "to ask his corporate connections to give money to WICFG."

05/31/2011 Doner talking points for Walker for Lowry Mays (Clear Channel): "Would he give $250K for your 501c4. Let him know that you can accept corporate contributions and it is not reported."

The donors got the message. Although it is quite likely that not everyone approached gave a check, many corporate checks flowed into the coffers of WCFG.

The money was so valuable to the Governor that he sent personal thank you notes.

On September 7, 2011 Kate Doner advises Walker, Gilkes, and R.J. Johnson in an email subject: Walker Recall Fundraising Efforts – thoughts: "Here are my quick thoughts on raising money for Walker's possible recall efforts. I am happy to put into an official "plan."

"CFG: -Make nice with RSLC -Lock down $ commitments from RGA, RNC, AFP now -Take Koch's money -Get on a plane to Vegas and sit down with Sheldon Adelson. Ask for $1m now. -Corporations. Go heavy after them to give. -Create new c4. Club for Growth name has issues."

Doner prepared detailed opposition research on donors for Walker. On November 14, 2011, Walker campaign manager Keith Gilkes sends a 13-page opposition research memo prepared by Kate Doner to Walker saying he wants Walker to be aware of the donor research so he would be aware of what he "might need to defend in in terms of contributions when these are disclosed." (Ex. 31.2, 1-100 doc.)

Brent Ferguson an attorney and campaign finance expert at the Brennan Center for Justice in New York told the Center for Media and Democracy that the corporate checks were a new revelation and important.

"The emails contain evidence supporting the claim that Governor Walker solicited corporate money for a campaign group he controlled. Wisconsin has long banned such corporate contributions to decrease the risk of corruption and its appearance," said Ferguson. The Wisconsin Supreme Court ruled in 2015 that coordination over ads was permissible as long as it did not involve "express advocacy" or its functional equivalent, but many of the ads run by groups that appear to be coordinating their activities with the Walker campaign were the functional equivalent of express advocacy according to a review by CMD.

Below we list a few of the corporate checks that may have been solicited by the Governor for his own 2012 recall election.

The American public, both Democrats and Republicans, overwhelmingly support full disclosure of campaign contributions because they suspect special interests get special treatment. Too often they are right. Some of Walker's corporate givers may have gotten something for their money.

The Guardian records indicate that Walker was scheduled to meet EZCorp CEO Eric Fosse on January 11, 2012. WCFG secured $35,000 from Texas EZPawn LP a few days later. The next year, Republicans on the state's budget committee quietly slipped a measure into the budget through a last-minute Motion 999 to allow payday lenders to declare a loan in default a mere 10 days after a payment was overdue, rather than the 40 days as previously reported the Capitol Times' Jack Craver. The payday lending industry lobbied for the measure and Walker declined to veto it.

Records indicate that John Menard, the owner of the big box store that bears his name, apparently sent two $1 million corporate checks from Menards Inc. to WCFG in June 2011 and April 2012. Walker boasts in an email on June 14, 2011: "I got $1 million from John Menard today." Email records indicate Walker and his wife were scheduled to have dinner with the Menards in November 2012 a rendezvous organized by Menard's attorney John R. Behling (later appointed to the UW Board of Regents by Governor Walker.)

After secret donations from Menard, Inc., the firm was awarded up to $1.8 million in special tax credits from a state economic development corporation that Walker chaired, as reported Michael Isikoff in 2015.

As reported previously, an out of state mine was also a big donor and big beneficiary of favorable legislation in Wisconsin. In the Guardian documents, prosecutors wrote that bank records show that the Gogebic Taconite (GTAC) mining company contributed at least $930,000 in corporate checks to WCFG and $300,000 to WMC-IMC in 2011-2012. (2014 Schmitz affidavit, 18). The company Gogebic Taconite is cited, not an individual employee.

This is in contrast to the $67,068 Walker's campaign committee received publicly from the mine's owners, the company's employees, and other mining industry executives from 2010-2012, according to the Wisconsin Democracy Campaign.

It is also notable that in the newly released documents, Governor Walker's Chief of Staff Keith Gilkes tells another Walker staffer Ryan Murray in a July 24, 2011 email "we should find out exactly what is in our mining account." During those years, GTAC lobbied the legislature to allow the firm to dig an open-pit iron ore mine in northern Wisconsin and to restrict access to managed forest land located near the mining site to inhibit protesters.

In 2013, Walker signed a highly controversial bill, written by GTAC lobbyists and passed by the Republican-led Legislature that decimated environmental regulations for iron mining as they pushed to open their mine in northern Wisconsin. After a multiyear effort they project was later abandoned as unfeasible.

According to the Guardian documents, prosecutors said that in preparation for the gubernatorial recall, on December 22, 2011, WMC sponsored a conference call for Walker with some of the state's largest corporations.

Prosecutors said that a few hours after the call, WMC lobbyist James Buchen emailed Walker directly at his private email address asking "to talk about the future of the UI and WC councils. I think this is something that really needs your attention." (Schmitz Affidavit, 2014). (This was referring to Wisconsin's Unemployment Insurance and Workers Compensation systems.) Prosecutors point to Senate Bill 200, introduced May 24, 2013, which required people receiving unemployment benefits to provide even more evidence they were applying for jobs, further penalized anyone who declined a job offer, and most importantly gave the state access to bank account information and the power to freeze bank accounts of individuals who allegedly owed money to the UI system.

According to state records, WMC and other business groups lobbied for the bill and Walker signed it into law.

Walker has denied any wrongdoing today.

Lisa Graves and Arn Pearson contributed to this report.

I read the Guardian story, this analysis really adds to the story. Thank you for your work!
Mourning my Wisconsin.