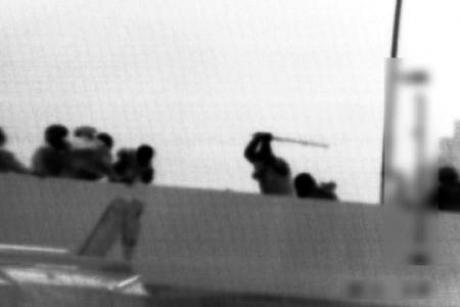 From video of Gaza flotilla (Reuters)President Obama came to power promising to end the foreign policy of the Bush era and institute a commitment to international cooperation and diplomacy, especially with the Muslim world. The controversy surrounding Israel's recent raid on a Turkish aid flotilla has made it difficult for the Obama administration to fulfill that promise. The administration does not want to alienate Turkey, a large Muslim nation with aspirations of joining the European Union, nor does Obama want to anger Israel, which has strong historical ties to America. Trying to pacify both nations, the Obama administration has taken an ambivalent and ambiguous position on how to resolve the conflict, which does not include a definitive statement on an international investigation into the causes and culpability of the confrontation. While Secretary of State Hillary Clinton declared last Tuesday that the United States "supports the Security Council's call for a prompt, impartial, credible and transparent investigation" and "an Israeli investigation that meets those criteria," the administration is merely "open" to the possibility of international participation.

Turkish Foreign Minister, Ahmet Davutoglu, saw through Secretary Clinton's murky words, and called for an independent and international investigation. Mr. Davutoglu's demand for multi-lateral involvement has been echoed across the globe by world leaders such as Russian President Dimitry Medvedev and European Council President Herman Van Rompuy. Instead of making good on his pledge to enforce international cooperation, President Obama seems to be attempting to convince Turkey and the rest of the world into believing an investigation conducted exclusively by Israel will be "prompt, impartial, credible and transparent."

By failing to actively support an international investigation, does the Obama administration seem to be aligning itself with more with tea-party politicians like Massachusetts Senator Scott Brown, more than the international community? Senator Brown stated on Sunday that Israel is "no liability for the U.S.," and that he was disappointed by the widespread criticism of Israel's actions. On this volitile issue which has captured the world's attention, President Obama risks being grouped with the conservative segment of America if the administration continues to support an Israeli-only investigation, while giving lip service to international participation by stating that it is just open to the possibility. This course of action is already showing severe effects on America's relationships with the Muslim world. The good will President Obama generated with his speech last year in Cairo, has been severely undermined by the Israeli raid and U.S. response, as demonstrated by numerous articles and cartoons in Arabic newspapers which depict Israel as flouting international law with American assistance. If President Obama wishes to truly bring about a new era in international law and diplomacy, he should fully support an international investigation into the Gaza-bound aid flotilla, and persuade Israel that a impartiality is possible if other nations are involved.

Great promise for international cooperation to implement, rather than to convince President Obama to Turkey and elsewhere in the world to believe that the research being done by Israel tries to be "immediate, impartial, reliable and transparent.
It is true that Obama has continued George W. Bush's foreign policy regarding Israel, which is an anti-Israel policy whose key points include funding the PLO and demanding concessions from Israel in exchange for nothing. Shrub was worse than his father whose official policy was "F--- the Jews". Obama simply does not know any better, but in this incident he at least had the sense to wait for facts to come in before spouting off about something he had no knowledge of. There are too many other world leaders whom that can not be said of. The flotilla controversy is as manufactured, senseless, and baseless as the ACORN controversy or "ClimateGate" and it makes no sense to say anything to promote it. Israel's only obligation to the flotilla was rescue as many survivors from the water as the Israeli ships were able to hold. Israel deserves the praise of liberals and progressives for going about this whole operation the liberal, progressive way, for offering to deliver the cargo after searching it for contraband so that no one would need to attempt to run a blockade in a war zone, for not sinking the ships when they refused to follow Israeli orders, for attempting to use non-lethal weaponry to maintain order and only resorting to firearms when Israeli soldiers were attacked and captured, for releasing the holy-war activists instead of charging them with espionage or holding them as prisoners of war until the end of the jihad, for delivering the cargo to Gaza, and for having delivered aid to Gaza continuously for years while Hamas produced fake reports of a humanitarian crisis. To condemn Israel in these circumstances is to join in mindless reactionary hate just because it is popular. On "Muslim Turkey", Turkey was a strictly secular nation with a Muslim majority population until 2003 when a jihadist party was voted into office and began reversing Turkey's foreign policy from pro-West to pro-Iran. Obama should not be condemned for being slow in going along with it. Rather, as Turkey is aligning with forces which are in a state of declared war with the United States, Obama ought to be opposing this change in direction and doing whatever he can to stop it within the bounds of respecting Turkey's sovereignty. The position of Israel in facing an international investigation for doing nothing wrong, from the same international community that put Iran in charge of womens' rights and Syria on the security council, is like that of a black man in the old South looking at the prospect of facing an all-white jury for the crime of looking at a white woman. We have already seen this happen and it was called the Goldstone Report, a report literally written by Israel's wartime enemies with no respect for international law, justice, evidentiary standards, or even simple honesty. After that disaster the international community has no reputation left to justify allowing it to have the last word against Israel, especially in such a clear-cut situation as this where any case against Israel would be thrown out prima facie in an honest court of law. And about the consensus in Arabic papers, these articles calling the Jews dogs and monkeys and calling for jihad against them, those cartoons of scowling hook-nosed Jews in Orthodox clothing with Stars of David on their hats and blood dripping from their hands... that is the racism that is such a problem in the Middle East. This is not the international consensus that any Democratic leader should align himself with. Again, this is what Obama should be speaking out <em>against</em>, not <em>for</em>.
i am appaulled yet to see another idiot defending the flotilla attack. take a look at what the few yet honest israeli academics and former justices have to say about israels actions, not just related to the flotilla but in general israels actions and its peoples psychology . these are renowned israelis condemning their own country for crimes committed. the whole worls is wrong and these handful of 5 million israelis are right. you deadshits will never learn to be humans.
The problems with foreign affairs seems to get worse year after year president after president. In my opinion if we could worry more about the United States and less about all the other countries in the world we could resolve a lot of problems. Lets take care of problems and issues on the home front and let Israelis Turks and everyone else deal with their own problems.
We must take care of our county before we take care off others
As for the "refugees". Israel successfully absorbed tens of thousands of Jewish refugees who were forced out of their homes and hadf to leave their belongings in Arab countries. Therefore, justice and logic demand that the Palestinian refugee problem be solved outside Israel's borders.
If you call the Israeli PR a spin, you should not forget, that the entire " Lets bring this ship to Gaza, was a spin too. The Israelis ha offered before their intervention, to unload the cargo, search for weapons and bring the humanotarian goods to Gaza. Obviously that was not the main purpose of the humanitarian journey... lennart