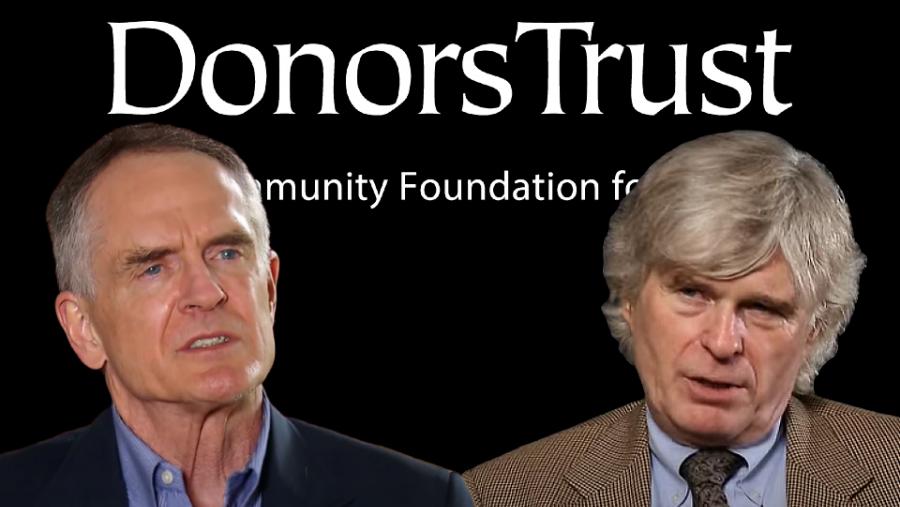 "Crime in this country is ethnically variegated," claimed Brimelow, president of the white nationalist hate group the VDARE Foundation. "There's ethnic specialization in crime. And Hispanics do specialize in rape, particularly of children. They're very prone to it, compared to other groups."

Blatantly racist statements like these are commonplace for Brimelow and for Jared Taylor, president of American Renaissance, two of the most notorious white nationalist leaders in the United States.

Two years after the conference, for the first time, a prominent conservative charity would fund both VDARE and the nonprofit behind American Renaissance. DonorsTrust, a donor-advised fund sponsor that manages and disperses wealthy conservatives' charitable funds anonymously, gave over $1.5 million to the VDARE Foundation in 2019, according to tax records obtained by the Center for Media and Democracy (CMD). That amount is nearly three times larger than VDARE's total 2018 revenue, meaning that, with DonorsTrust's help, the hate group was poised to significantly expand its operations last year.

DonorsTrust also gave $10,500 to the New Century Foundation, the nonprofit that finances American Renaissance, which publishes a website, videos, and podcasts and puts on annual conferences that draw a coterie of the country's most prominent white nationalists. That donation appears to be DonorsTrust's first to the group.

"DonorsTrust is a community of donors devoted to creating a better future," states the group's 2019 donor prospectus. "Our donors support charities they believe protect our nation's constitutional liberties and strengthen civil society through private institutions rather than with government programs."

DonorsTrust and its sister nonprofit, Donors Capital Fund, are favorite funding vehicles of Republican billionaire families such as the DeVoses, Kochs, and Mercers. Donors deposit money into individual accounts, managed by DonorsTrust or Donors Capital Fund, and direct the fund managers to deliver their money to the nonprofits of their choosing, a process that shields the donors' identities from the public. Donor-advised funds offer a "double tax benefit" to the wealthy; when donating appreciable assets like stock or business shares into their individual funds, donors get a capital gains tax break as well as the typical charitable tax deduction.

Lawson Bader, president and CEO of DonorsTrust and Donors Capital Fund, told CMD, "DonorsTrust–like the vast majority of donor-advised funds–allows its donor-advisors and not the DAF itself, to create a list of preferred and legally recognized charitable and public-interest organizations that they individually wish to support."

However, the organization's donor prospectus states, "Grants from accounts are made upon request to board-approved charities." This indicates that the DonorsTrust board must review and approve of each potential recipient. That board consists of Bader and multiple others with close ties to conservative advocacy groups and academic programs funded in part by Charles Koch.

Bader did not respond to follow-up questions about the approval process and why he and the board approved two white nationalist groups.

As he defended his organization's substantial funding of white nationalist hate groups, Bader invoked a 1958 court case that protected the identities of donors to the Black civil rights group the National Association for the Advancement of Colored People (NAACP).

"The Supreme Court has made it clear that releasing names of private givers poses a direct threat of retaliation," Bader said. "This occurred most notably in 1968 (sic) when the court struck down Alabama's attempts to gain access to the NAACP's donor list during the heyday of the civil rights movement."

"We are extremely troubled by the findings in your report," Michael Edison Hayden, a senior investigative reporter at the Southern Poverty Law Center (SPLC), told CMD. "Here, you have extremely wealthy activist donors funneling money into white nationalist groups. These are groups that traffic in the type of dehumanizing racist pseudoscience that has inspired both terrorism and government-sanctioned horrors, like so-called child separation."

SPLC has been tracking hate activity since 1971, when it was founded "to ensure that the promise of the civil rights movement became a reality for all."

It is likely that DonorsTrust's 2019 donation of $1.5 million helped VDARE purchase an historic castle in Berkeley Springs, West Virginia for $1.4 million without a loan in February 2020. As the SPLC documented, local residents were disturbed by VDARE's presence and feared that it would reinforce negative stereotypes of West Virginia, which is 95 percent white and one of the least diverse states in the country.

"The castle gives VDARE close access to Washington, D.C., where they have White House allies like [senior policy adviser] Stephen Miller and [communications officer] Julia Hahn," said Hayden. "These donations help to explain where they might have gotten that kind of money."

Brimelow came to prominence in 1995, when he published Alien Nation, a book that argued that America has historically been dominated by white people and should remain that way. In 1999, he founded what would become the VDARE Foundation.

For years, VDARE has attacked immigrants and people of color in the U.S., and it has also trafficked in antisemitism.

"The [Jewish] objective has been control of economic resources and political power," wrote antisemite Kevin MacDonald on VDARE's website in 2006. "One example: overwhelming Jewish support for non-traditional immigration, which has the effect of weakening America's historic white majority."

MacDonald was describing a classic tenet of white nationalism around the world: that Jews destroy white society by facilitating immigration by people of color, a trope often referred to as "white genocide."

Writing on VDARE.com two years later, American Renaissance's Jared Taylor, who personally avoids overt antisemitism, echoed this general sentiment, claiming that "our rulers and elites welcome replacement by aliens," and "this is a disease that is killing us."

In recent years, VDARE has continued its toxic influence on the country.

"VDARE in particular defended the deadly Unite the Right rally staged in Charlottesville, Virginia in August of 2017 and has expressed sympathies for the writings of white supremacist murderers, like the man who killed 23 people in an El Paso WalMart in 2019," said Hayden. "Additionally, VDARE published vile, racist conspiracy theories related to the COVID-19 pandemic, helping to fuel the chaos we see now across our country."

On YouTube, VDARE appeared to defend the racist manifesto published by the El Paso shooter. YouTube permanently banned the channel in August 2020.

Brimelow and Taylor have a close relationship and are both affiliated with the racist "alt-right" and its figurehead, Richard Spencer. And Brimelow has ties to the Trump administration beyond Miller and Hahn; Trump's economic adviser Larry Kudlow hosted Brimelow at his home for his birthday party in 2018.

He and American Renaissance created the "black-on-white crime" myth, a theory popular among white nationalists that, in recent years, spread online and inspired deadly terror attacks, including Dylan Roof's 2015 murder of nine Black parishioners at a South Carolina church. Roof read about the myth via the website of the Council of Conservative Citizens, another white nationalist group with close ties to Taylor.

This myth is premised on a false argument, as stated by Taylor, that,: "The United States has neither a unique ‘culture of violence' nor inadequate gun laws. It has a high rate of violent crime because it has a large number of violent black criminals."

"Taylor is at the center of white supremacist propaganda," Heidi Beirich, the former head of SPLC's Intelligence Project, told this author in 2019. "He is THE purveyor of the black-on-white crime myth that has inspired so much violence. His ideas led to Dylann Roof and lord only knows how much more hate crime."

After Roof's terror attack, Taylor condemned the murders but defended both the Council of Conservative Citizens and his organization's hateful propaganda, saying, "Our site educated [Roof]. Our site told him the truth about interracial crime."

Reporters have revealed few donations to the New Century Foundation, a relatively small nonprofit that took in $381,000 in 2018 and less than that the year before. But Sludge exposed over $100,000 in contributions by Fidelity Charitable Gift Fund, a donor-advised fund sponsor affiliated with Fidelity Investments, over the 2016 to 2018 fiscal years.

This year, the New Century Foundation got some extra help from taxpayers. According to Accountable.us, the nonprofit received $51,600 in Paycheck Protection Program funds, which were approved by Congress to help businesses during the pandemic-caused recession.

Past Donations to Hate Groups

While its recent donations to white nationalist groups are new, DonorsTrust has a history of funding groups that the SPLC considers anti-immigrant, anti-Muslim, anti-LGBTQ hate groups.

The National Christian Foundation has given the most money to hate groups of any prominent donor-advised fund sponsor. Several donor-advised funds that are not associated with any particular political ideology or religion, including Fidelity Charitable and Vanguard Charitable, which is linked to investment firm Vanguard, have also been funding hate groups for years.