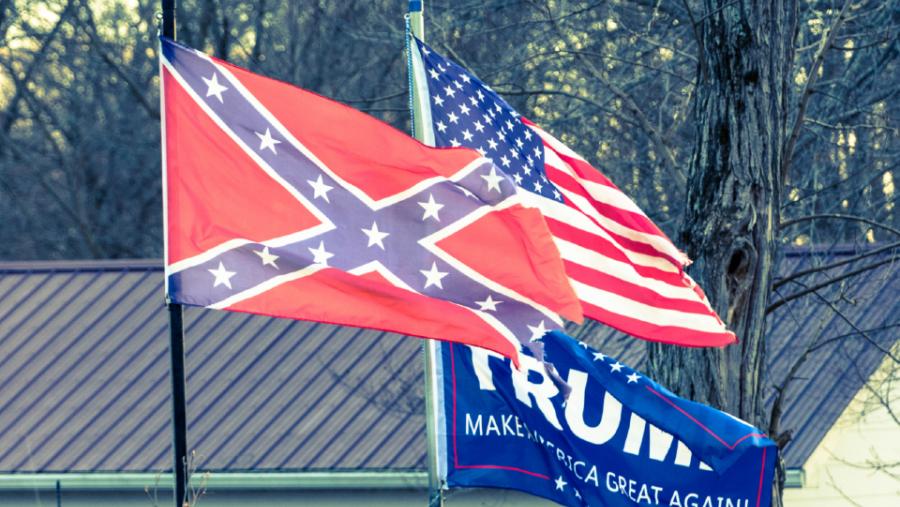 Eight years after disbanding its task force on Public Safety & Elections due to controversy over its "Stand Your Ground" and voter ID legislation, the American Legislative Exchange Council (ALEC) is diving back into some of the most divisive social issues of our time.

ALEC, a pay-to-play organization that facilitates bill writing by state lawmakers and business interests, has created a secret task force on voting and redistricting, which Documented uncovered, and is dragging its corporate members back into race-related issues around police reform and protection of monuments. In a preview of what may occur at its virtual annual meeting this week, ALEC has sided with President Trump's latest executive orders on those issues.

On July 2, ALEC's executive director Lisa Nelson, along with largely conservative and right-wing groups and individuals, signed a letter supporting Trump's executive order that instructs the attorney general to prioritize criminal prosecutions for the destruction of monuments on federal property, with prison sentences of up to 10 years.

The executive order also directs federal agencies to withhold federal funding from cities that do not protect monuments from demonstrators.

The letter, which was published on the Tea Party-aligned website Conservative HQ, supports Trump's order to prosecute to the fullest extent "any person or entity that destroys, damages, vandalizes, or desecrates a monument, memorial, or statue within the United States." It also highlights portions of Trump's order that cast racial justice protesters as "rioters, arsonists, and left-wing extremists" and "the mob," and claim that they are aligned "with ideologies—such as Marxism—that call for the destruction of the United States system of government."

The letter says Americans must "teach our history with honesty and respect" and uphold the nation's "culture and values," yet it does not address the underlying issue of Confederate statues and other monuments to white supremacy, and what these monuments say to residents of color.

Chad Williams, chair of the Department of African and African American Studies at Brandeis University, told NPR that Trump's executive order is "problematic," especially "the president's desire to tamp down, to crush any forms of protest and dissent and to weaponize the various apparatuses of federal government, including the military, National Guard, Secret Service, to act as agents of enforcement."

Trump has failed to address the connection of many of the monuments to slavery, retweeted a video showing one of his supporters yelling "White power!" earlier this month, and defended people who fly the Confederate flag on July 15.

In addition to ALEC's Nelson, other signers of the letter supporting Trump's order include anti-LGBTQ hate figures such as Tony Perkins, president of the Family Research Council, Rob Chambers, vice president of the political arm of the American Family Association, and Frank Wright, CEO of D. James Kennedy Ministries. Several leaders of the secretive Council for National Policy, which has had ties to multiple white supremacists, signed the letter, as did Koch operative Sean Noble, president of American Encore.

Many of the same signers of the Conservative HQ letter also signed a June 12 letter, including Al Regnery, chairman of the Council for National Policy's Conservative Action Project. The letter, which called for "justice, not chaos" after the George Floyd murder, "reject[s] the sweeping claim that all of law enforcement is racist."

At the virtual meeting on the morning of July 16, ALEC's Task Force on Criminal Justice will address policing issues, including a proposed model bill based on its "Statement of Principles on Policing and Community Engagement."

Trump signed his order in a televised Rose Garden event, surrounded by law enforcement officials. He did not once mention racism in his speech about the order. Kristina Roth of Amnesty International USA told the Associated Press that the order "amounts to a Band-Aid for a bullet wound."

Vanita Gupta, president and CEO of the Leadership Council on Civil and Human Rights, which has 220 member groups, said, "This executive order is a woeful attempt to shift focus from the dangerous rhetoric and policies [Trump] has previously promoted. Piecemeal reform efforts will not achieve the transformative change needed to heal our country and usher in a new era of public safety in which all communities thrive."

A House bill backed by Democrats, the "George Floyd Justice and Policing Act," would lower the criminal intent standard—from willful to knowing or reckless—to convict a law enforcement officer for misconduct in a federal prosecution.

It also would require police departments to send data on the use of force to the federal government and create a grant program that would allow state attorneys general to create an independent process for investigating misconduct or excessive force. The bill would also make it easier for people to recover damages when police departments violate their civil rights.

ALEC's Return to Its Racist Past

ALEC's decision to align itself with a racist and divisive president marks a dramatic return to the organization's earlier support for racist policies, and comes at a time when 90 percent of Black Americans disapprove of Trump's response to the murder of George Floyd.

"For at least three decades, the corporations, special interest groups, and legislators on the ALEC Public Safety & Elections Task Force (known as the Criminal Justice Task Force until 2009) have approved model bills that promote for-profit prisons and lengthen prison sentences, criminalize immigrants, expand the ‘war on drugs,' thwart evidence-based pre-trial release programs in favor of for-profit bail-bonding, and many other policies," CMD wrote in 2012.

However, ALEC's promotion of racist voter ID laws—which disproportionately affect people of color—and "Stand Your Ground" laws generated a strong public backlash in 2012 in the wake of the murder of Trayvon Martin, an unarmed Black teen in Florida.

Under Stand Your Ground laws, a person has the right to use deadly force against threats or perceived threats of harm, even if they could safely retreat from the situation. ALEC's model Stand Your Ground bill, backed by the National Rifle Association, became law in 23 states.

Progressive groups led by Color of Change, Common Cause, and People for the American Way called for a boycott of ALEC corporate members, leading Coca-Cola, Wendy's, McDonalds, candy maker Mars, and many more companies to drop out of ALEC.

ALEC disbanded its task force that wrote the bill, which was chaired by Wal-Mart and co-chaired by the NRA, and it stopped promoting the legislation.

ALEC's focus on policing and monuments comes in the context of a June 17 letter from ALEC legislative board members in response to the murder of George Floyd.

In "Speaking Up for Restorative Justice," ALEC argues that "… it is incumbent on organizations like ours to seek opportunities to advance policy that takes these [racial] inequities into account. We must focus on creating a fair society that ensures both equality and equal opportunity under the law."

But ALEC's claim of "fighting racism" stands in conflict with its broader policy agenda, including on elections and voting. ALEC's past model "Voter ID Act" made it more difficult for millions of Americans, disenfranchising many low-income and minority voters who do not have a driver's license.

For example, a federal appeals court ruled in 2016 that provisions of North Carolina's voter ID law "target African-Americans with almost surgical precision" and "impose cures for problems that did not exist."

More recently, in 2018, ALEC adopted a model resolution to limit judicial power on redistricting, making it easier for ALEC-dominated legislatures to gerrymander district maps, a process that often use party affiliation to pack Black voters into a small number of districts, diluting their voting power in surrounding areas.