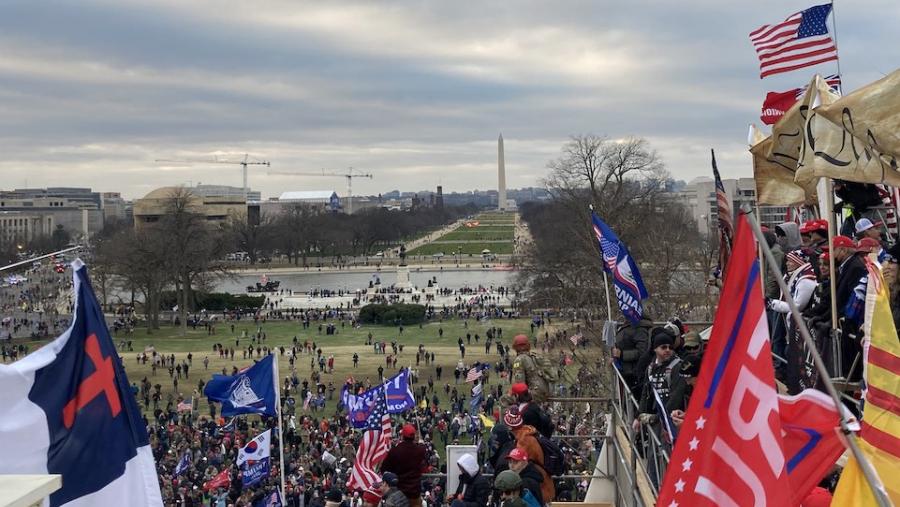 The staff and leadership exodus at the Republican Attorneys General Association (RAGA) continues to grow in the wake of the group’s decision to promote Peter Bisbee, who was responsible for generating robocalls to turn people out for the Jan. 6 Capitol insurrection, to be the group’s new executive director.

In an Apr. 25 email obtained by the Center for Media and Democracy (CMD), RAGA’s director of operations, Jason Heath, writes, “After 8 years of service, I am writing to inform you that I have made the difficult decision to resign as RAGA’s Director of Operations. I respect your votes, but the direction is not one I can honestly stand behind.”

Heath had been working for RAGA since it broke off from the Republic State Leadership Committee in 2014.

Heath's departure comes on the heels of the sudden resignation of Georgia Attorney General Chris Carr as RAGA's chair over Bisbee's selection, citing "a significant difference of opinion...as to the direction this organization should take going forward" and "vastly opposite views of the significance of the events of January 6."

Bisbee was formerly the head of RAGA's sister organization, the Rule of Law Defense Fund (RLDF), and was responsible for sending out robocalls encouraging supporters to "march to the Capitol and call on Congress to stop the steal" days prior to the deadly Jan. 6 Capitol invasion.

Other RAGA staff have quit over Bisbee's selection as well. On April 22, the Alabama Political Reporter published a resignation letter sent to Republican attorneys general from Ashley Trenzeluk, RAGA's finance director stating that,

As RLDF Executive Director, Pete Bisbee approved the robocall expenditure, and was the only other person accountable for RLDF involvement in the January 6 events. Over the last few months, I have fielded, reassured and assuaged concerns from our core donor base on the future direction of our organization. The result of the executive committee vote to nominate Pete as RAGA's Executive Director is a decision I cannot defend.

Bisbee replaced Adam Piper, who resigned a week after the violent events unfolded at the Capitol and the story broke about RAGA's involvement. Before his resignation, Piper was adamant that RAGA and RLDF had no role in the insurrection.

At least one other GOP attorney general has signaled discomfort with RAGA's direction following the insurrection. in a Jan. 11 email obtained by CMD, Idaho's Chief Deputy Attorney General Brian Kane writes that "Idaho will not be participating in any RLDF activities until further notice," and any participation in RAGA will be "subject to the approval of Attorney General Wasden."

Carr has been replaced as RAGA's chair by Missouri Attorney General Eric Schmitt, a strong Trump supporter. Schmitt received an invitation for an RLDF conference call with Bisbee on Jan. 5, but has not confirmed if he was on the call.

"Attorney General Schmitt absolutely had no knowledge of or involvement in the robocall, and condemns the violence that took place on [Jan. 6] in the strongest possible terms, period," Schmitt spokesman Chris Nuelle said in a statement.

Schmitt undeniably worked hard for Trump in trying to prove that voter fraud led to Biden's victory in November. On Nov. 9, nine Republican AGs joined Schmitt in filing an amicus brief with the U.S. Supreme Court in a case challenging Pennsylvania's vote-by-mail ballots.

Paxton, also a co-chair of Lawyers for Trump, was a speaker at the Jan. 6 rally preceding the violent events at the Capitol, where he told the crowd, "We will not quit fighting."

Schmitt's Solicitor General John Sauer registered for a "Senior Staff Summit" organized by RLDF on Sept. 23 and 24, where it held "war games" to map out post-election strategies if Trump lost.

Piper emailed on Sept. 24, "WAR GAMES – 32 AG Staff Members are huddled in Atlanta for a series of conversations planning for what could come if we lose the White House."

RAGA, RLDF, its members, and donors will be forever tied to the Jan. 6 insurrection, especially now that they have apparently doubled down on  fanning the flames of Trump's Big Lie.