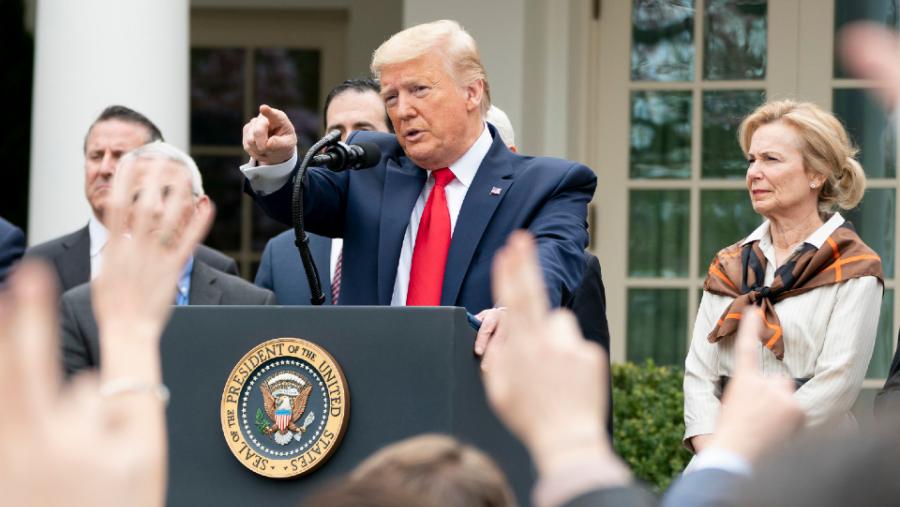 By Alex Kotch and Don Wiener

Since the bipartisan CARES Act became law on March 27, more than 175 publicly traded companies received roughly $650 million in Paycheck Protection Program (PPP) loans, which will be forgiven if the recipients use the money according to the law's guidelines.

One PPP recipient is the digital film distributor Cinedigm, which landed a $2.2 million small business loan from the Small Business Administration (SBA) on April 15 to "retain employees, maintain payroll, and make lease and utility payments to support business continuity throughout the COVID-19 pandemic."

Cinedigm may not, however, be eligible for the funds. The company, which took in $43.6 million in revenue over the last 12 months, is majority owned by a subsidiary of the Beijing-based private equity firm Bison Capital Holding Company Limited, which invests in media and health care companies.

An interim final rule issued by the SBA on April 24 explained that hedge funds and private equity firms are ineligible for PPP loans. In terms of the firms' subsidiaries, this rule cites an affiliation rule, which states that "in most cases, a borrower will be considered together with its affiliates for purposes of determining eligibility for the PPP. Under SBA rules, entities may be considered affiliates based on factors including stock ownership…"

Private equity-owned or not, many public companies will have to pay back their loans, and some already made plans to do so. On April 23, the Treasury issued new guidance requiring PPP borrowers to certify "in good faith" that they truly need the loans to stay in business and don't have the ability to access other sources of capital. If a recipient can't demonstrate the need for a loan, it will have to pay it back.

It's unclear whether Cinedigm has adequate access to capital, although it is likely, given its private equity owner. Bison Capital used its wholly owned subsidiary, Bison Entertainment Investment Limited, to purchase $30 million worth of Cinedigm stock in 2017, a majority share. At the time, Bison Capital also gave Cinedigm a $10 million loan with the potential for debt retirement.

Cinedigm and the U.S. Treasury did not respond to requests for comment. The Small Business Administration told CMD that it does not discuss individual loans. On April 28, Treasury Secretary Steve Mnuchin and Small Business Administrator Jovita Carranza announced that the agencies "will review all loans in excess of $2 million, in addition to other loans as appropriate, following the lender’s submission of the borrower’s loan forgiveness application."

Number of employees also determines PPP eligibility. Loan recipients and all affiliated firms, including parent companies, must have fewer than 500 total employees to be eligible for the loans. It's not clear how many employees work at Bison Capital and all of its affiliates.

One week after receiving the PPP loan, Cinedigm closed the final share transfer in a deal to acquire 27 percent of outstanding equity of the Chinese entertainment company Starrise Media Holdings Limited. A February press release valued the full stock transaction, an exchange of Cinedigm shares for Starrise shares, at $68 million.

From April 17-24, the company's stock rose by 18 percent as the NASDAQ-100 Index fell. Since then, the stock price has fallen.

On April 21, a Cinedigm press release reported large increases in viewership of its ad-supported platforms in March.

As his government helped out a company owned by a Chinese private equity firm, Trump and other Republican officials criticized the country for failing to contain COVID-19 and allegedly withholding information about the extent and origin of the virus. The president is now planning to demand compensation from China for its alleged mishandling of the virus. The plan, in its early stages, may include a lawsuit against China for damages totalling hundreds of billions of dollars.

Bison Capital, which is incorporated in the Cayman Islands, a tax haven, was founded by Peixin Xu, a Chinese citizen who is chairman of the company. His wife, Hong Kong citizen Fengyun Jiang, owns 100 percent of Bison Capital. Xu and Jang each own 10 percent of Cinedigm, while four Bison Capital affiliates own a total of 40 percent, according to equity research firm Fintel. Xu and fellow Bison Capital director Peng Jin are directors at Cinedigm.

A 2019 Securities and Exchange Commission filing states, "Cinedigm is deemed to be a foreign person based on its majority ownership by [Bison Entertainment Investment Limited]," a wholly owned subsidiary of Bison Capital. The company is based in Los Angeles and has an office in New York City.

The CARES Act does not exclude loans to businesses with foreign parent companies, but if the "U.S. subsidiary carries out operations in other countries as well as the U.S...or relies on personnel based outside the U.S., a careful consideration of the subsidiary's operations and personnel will be necessary to determine eligibility," according to the law firm, White & Case, LLP.

Cinedigm is working on a Chinese TV channel geared towards American audiences, but this may not mean that it has any employees abroad.

"The fact that foreign-controlled companies such as Cinedigm are getting aid under the PPP makes it all the more important for the federal government to release the full recipient list," said Phil Mattera, research director at the nonprofit watchdog Good Jobs First, which is tracking the PPP loans. "That will allow COVID Stimulus Watch and other watchdogs to scrutinize the data and uncover abuses."