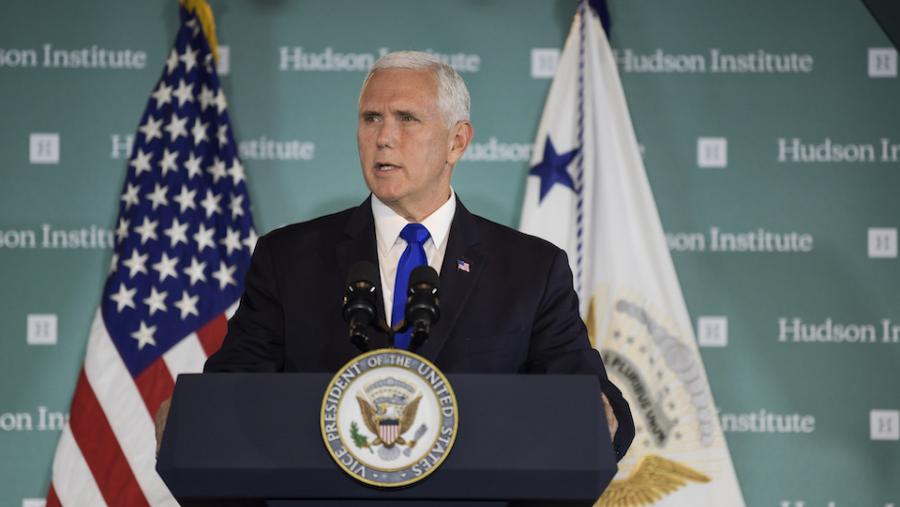 Vice President Mike Pence is coming to Madison today to deliver remarks at an event at the state capital organized by, Hispanics for School Choice (HFSC). The so-called "Wisconsin School Choice Student Showcase" is part of a larger campaign to privatize schools held this week in all 50 states under the banner of National School Choice Week (NSCW).

School privatization advocates spin their efforts around the idea of "parental choice" because shifting taxpayer money from public schools to vouchers and charter schools is unpopular. "Among K-12 parents, more (60%) rate their community's schools positively, and 76% give their own child's school an A or B grade, up a slight 6 percentage points from last year," according to the 2019 PDK Poll, the longest running survey of American opinions on public education.

The Hispanics for School Choice website lists no staff or members of the group, nor does it disclose its funding or address. HSC has revenue of $82,707 and net assets of $15,577, according to its latest IRS filing. A press release for today's event shows that HSC is now led by Tammy Olivas.

HFSC's largest funders are the Milwaukee-based Lynde and Harry Bradley Foundation and Secretary of Education Betsy DeVos's American Federation for Children and Alliance for School Choice. Since 2013, Bradley has given HSC $170,000 and another $31,000 through its donor conduit, the Bradley Impact Fund.

Internal "Grant Proposal Records" prepared by Bradley staff call HFSC, "a grassroots communications project designed to bridge the gap between desires and reality in the Hispanic community," and justify funding the operation because, "The Hispanic population is growing rapidly, and the opportunities to reach out to them from a conservative perspective are valuable. HFSC specifically places itself in opposition to the views of Voces de la Frontera, the Leftist Hispanic advocacy group, making it a little less likely that the voices Spanish speakers hear in Wisconsin won’t be from only one side."

DeVos's Alliance for School Choice has donated $120,000 to HFSC and her American Federation has added another $121,000 since 2011. DeVos is one of the nation's primary proponents for the privatization of the public education system advocating for private charter schools, on-line schools and taxpayer funded vouchers for private and religious schools.

In her current capacity as Secretary of Education, DeVos is pushing a nationwide voucher system, coined "Education Freedom Scholarships," that faces an uphill battle in Congress. The Secretary clashed with Democrats in a hearing at the Capital on the program, with Ohio Democratic Rep. Marcia Fudge calling "the program a 'shell game' that benefits some children at the expense of those in the public school system."

Since its inception, HFSC has brought in just over a million in revenue, 44 percent of which came from Bradley and DeVos alone.

The National School Choice Week campaign is run by School Choice Event Services, a political front group of Campanella Media & Public Affairs. Andrew Campanella is President of both and his NSCW's Director of Communications and External Relations Shelby Doyle is a registered agent of Campanella’s PR firm.

Before joining NSCW, Campanella worked with DeVos in "senior-level positions" at American Federation for Children and Alliance for School Choice.

While School Choice Event Services (SCES) is not a registered nonprofit, its payments as a "contractor" are disclosed on IRS filings of other nonprofits. The Gleason Family Foundation, the "charitable" arm of the Rochester, New York-based manufacturer, the Gleason Corporation, details $7 million in payments to SCES between 2013 and 2018.

The Gleason Family Foundation has no website or registered address. When Media Matters' Alexander Zaitchik attempted to call Gleason's phone number listed on its IRS filing back in 2012, no other than Andrew Campanella returned his call.

School Choice Wisconsin is a Milwaukee-based nonprofit that promotes school vouchers, charter schools, and education privatization. Its latest IRS filings show that it doubled its revenue from 2017 to 2018 to $1.2 million.

The Bradley Foundation has been one of SCW's biggest funders, giving just over $4 million to the organization since 2004. In internal "Grant Proposal Records," Bradley calls SCW "one of the Foundation's signature grantees." In order to convince Wisconsin parents to abandon their public schools in favor of private ones, Bradley funded SCW to promote "positive stories" in the news and social media "with parents and children who participate in the program, featured in video and audio packages describing their experiences with Choice."

The Walmart family's Walton Family Foundation, another major funder in the effort to privatize our nation's schools, gave SCW $3,190,000 between 2004 and 2016.

No Better Friend Corp. just launched in 2019, so it has yet to file with the IRS and has not disclosed its funders on its website. It is led by Kevin Nicholson, a Wisconsin businessman who lost the 2018 Republican U.S. Senate primary to Leah Vukmir. This may be the organization's first education-related event.

One need only look to Nicholson's top campaign donors and board members at No Better Friend to make an educated guess as to who might be funding his latest effort, Liz and Richard Uihlein. Uihlein backed groups spent close to $11 million supporting Nicholson's 2018 primary run.

The Wisconsin Institute for Law & Liberty (WILL), the "MVP" of Wisconsin's network of right-wing groups according to Bradley, defends school privatization efforts in Wisconsin courts and has filed suit against teacher unions. It also produces cherry-picked studies, including one touting the economic benefits of lower-income students using taxpayer money to attend private schools, while ignoring the impact the loss of funds would have on public schools.

WILL was founded in 2011 with "major support" from the Bradley Foundation, and Bradley, along with the Bradley Impact Fund, has provided WILL with 52 percent of its total revenue. Its latest IRS filing shows it had $1.9 million in annual revenue in 2018.

Charles Koch's Americans for Prosperity Foundation is the $17 million "education" arm of its sister astroturf outfit Americans for Prosperity. Charles Koch has long been hostile to public schools and recently joined forces with the Walton family to launch a multimillion dollar "disruptive innovations" campaign to seed "500 new schools, programs and education tools across the country."

Pence will appear at another school choice event in Pennsylvania next week before speaking at a Women for Trump rally with counselor to Trump Kellyanne Conway and DeVos.

Yes, this has very little to do with Hispanics and more about corporations pushing to privatize public services so they can extract as much profit (and control) from them as possible. Unfortunately, these Foundations will exist for eternity but we can still celebrate as the people who fund them die one by one.