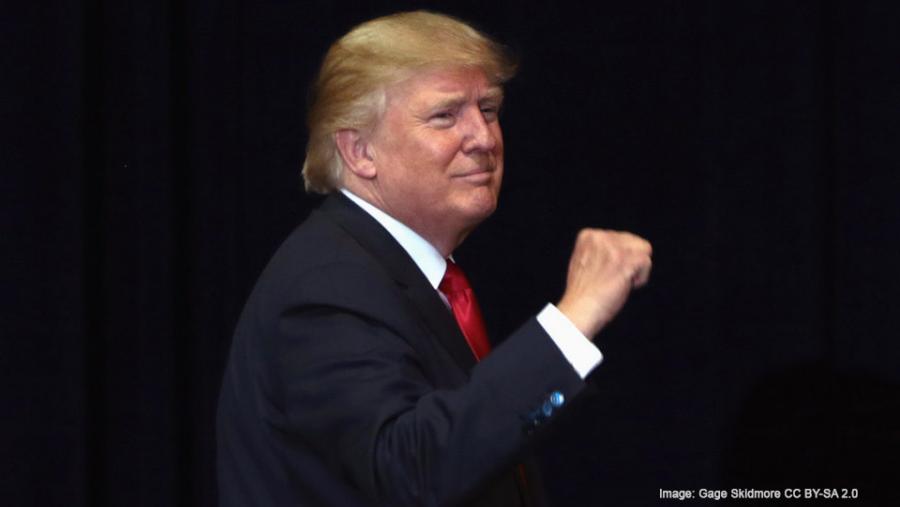 Last week's FBI raid on the office and home of Trump's lawyer, Michael Cohen, is just the latest sign that President Trump may be in serious hot water over possible campaign finance violations, in addition to his obstruction of justice and questionable dealings with Putin's proxies.

President Nixon found himself in similar straits in 1973. It may have been the Watergate break-in that sparked congressional investigations and the appointment of a special prosecutor, but it wasn't long before the investigations uncovered stories about briefcases full of money, illegal corporate contributions, and other campaign finance crimes. Illegal political fundraising activities and improper use of reelection funds formed a central part of Nixon's impeachment, and his campaign money games eventually resulted in the conviction or guilty pleas of 32 individuals and 19 corporations.

The most salacious of Trump's transgressions on this front was the payment of $130,000 to adult-film star Stormy Daniels just days before the 2016 election to ensure her silence about their alleged extramarital affair in 2006. That payment was brokered and made by Cohen, Trump's longtime personal lawyer and fixer, and may be the subject of communications between Cohen and the president seized by the FBI.

Common Cause filed a complaint with the FEC and Department of Justice in January, charging that the payoff was made "for the purpose of influencing the 2016 general election" and therefore had to be reported as an in-kind contribution to Trump's campaign and comply with contribution limits and restrictions. "It certainly looks pretty obvious to me that this was hush money payment," Common Cause lawyer Paul Ryan told CNN.

The payoff to Daniels was routed from Cohen to a dummy corporation set up for the transaction and then to Daniels' attorney, Keith Davidson, on October 27, following threats by Davidson that she would end her silence. Trump has publicly claimed that he knew nothing about it.

Cohen, however, has complained to friends that he never got paid back for the $130,000, which he personally covered using his home equity line of credit. Just who promised to finance the payment will determine how serious the campaign violation is. If it was Trump himself, it would be a reporting violation, but there was no limit on how much he could contribute to his own campaign. If it was the Trump Organization, however, it would constitute an illegal corporate contribution.

Either way, Trump may be on the hook. "If the government could prove Trump knew about the payment and intended it to aid his candidacy, he would still be a conspirator in such a crime," said Liam Brennan, the federal prosecutor who won a corruption conviction against Connecticut's former governor John Rowland in 2014.

According to the Department of Justice's handbook on election offenses, knowing and willful violations of the Federal Election Campaign Act trigger criminal penalties "and should be considered for federal prosecution." Those penalties were significantly stiffened by Congress under the Bipartisan Campaign Reform Act of 2002 in order to prevent corruption and its "adverse effect on the proper functioning of American democracy."

The Daniels payoff is not Trump's only campaign finance headache. The attorney for Stephanie McDougal—the former Playboy playmate who was paid $150,000 by American Media Inc. (AMI) in order to "catch and kill" the story of her alleged 2006 affair with Trump—claims Cohen negotiated that payoff as well in order to boost Trump's political fortunes. The FBI raid on Cohen's office also reportedly targeted records of the payment to McDougal.

And then there's the Trump Tower doorman that AMI paid $30,000 in 2015 to squelch the rumor that Trump fathered an out-of-wedlock child with a hotel employee. Common Cause has filed criminal complaints against Trump, his campaign committee, and AMI for both payoffs.

But it doesn't stop there. Trump also faces a criminal complaint filed in March by Citizens for Responsibility and Ethics in Washington (CREW) and Democracy 21 against his campaign committee, White House chief strategist Steve Bannon, and the John Bolton Super PAC for their work with Cambridge Analytica. The complaint, lodged with the DOJ and FBI, asks for an investigation into whether those parties conspired to aid and abet Cambridge Analytica's illegal use of foreign nationals to substantively participate in and advise the Trump campaign and Bolton's independent expenditures.

Special Counsel Robert Mueller has asked Cambridge Analytica for its internal records, and has subpoenaed Bannon to appear for questioning. The likely target? Whether Trump's campaign used Cambridge Analytica's services to help facilitate Russia's use of Facebook and other social media sites to disrupt the 2016 elections. Both Congress and the FBI have been investigating that possibility since the spring of 2017.

The Justice Department indicted 13 Russian nationals and three companies in February 2018 for using fake and stolen U.S. identities to engage in social media and grassroots disinformation campaigns designed to "sow discord in the U.S. political system" and "support[] the presidential campaign of then candidate Donald J. Trump."

Trump's son-in-law, Jared Kushner, was in charge of his campaign's digital operations and hired the British data mining firm in June of 2016. "We found that Facebook and digital targeting were the most effective ways to reach the audiences," Kushner said. "We brought in Cambridge Analytica."

Cambridge Analytica was created as an offshoot of the British firm SCL Group in 2013 with a $15 million investment by the Mercer family, billionaire backers of right-wing causes and Breitbart News, and was run by Robert and Rebekah Mercer, Steve Bannon, and SCL director Alexander Nix. The Mercers were among the biggest financial backers of Trump's presidential campaign. Robert Mercer pumped $15 million into outside groups to promote Trump's election, and donated another $1 million to his inaugural committee.

Any one of these campaign finance imbroglios could come under special counsel Robert Mueller's microscope, or the scrutiny of the U.S. Attorney's office in New York, and put Trump in legal jeopardy, depending on what he knew and when he knew it, or if he authorized his lawyer or other agents to take the actions in question.

This article was written by Arn Pearson in his capacity as a senior fellow for People for the American Way and first published in the PFAW Blog.