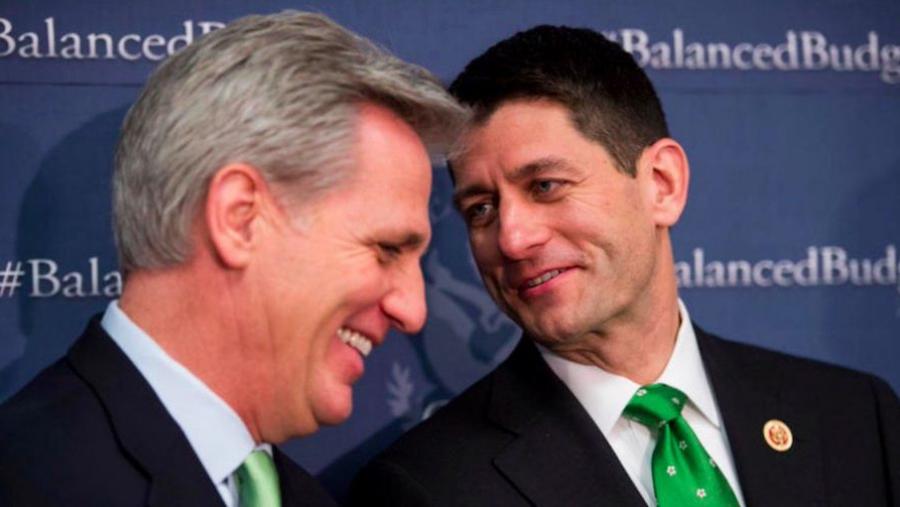 Last week Senate Republicans passed a tax bill that hands massive tax breaks to corporations and the rich at the expense of low-income and middle-class Americans. Written behind closed doors with the help of 6,000 lobbyists and rammed through before anyone could read it, the bill offers Christmas presents for special interests, like eliminating a tax that private jet owners have fought the federal government over and tax breaks hedge-fund managers living in the Virgin Islands. And it sets the stage for a sweeping attack on the New Deal and Great Society reforms of the past century that built America’s middle class.

But as bad as that is, things could get even worse.

Waiting in the wings on Capitol Hill are proposed GOP spending bills that would help the wealthy winners in this year’s epic tax rewrite lock in their power.

Republicans have hidden “policy riders” in the fine print of those bills that will further open the floodgates to big money in politics — while making darn sure we can’t find out where it’s coming from. That’s a surefire way to guarantee that the special interests and billionaires bankrolling federal elections get to increase their influence in Washington without any annoying scrutiny from voters.

One Senate appropriations rider prohibits the Securities and Exchange Commission (SEC) from developing rules that would require corporations to disclose their political spending to shareholders. Politicians drunk on dark money are especially worried about that prospect, because more than 1.2 million of us have submitted comments to the SEC — the most in the agency’s history — calling for a corporate disclosure rule. That includes a host of government reform organizations, a bipartisan group of former SEC chairs and commissioners, five state treasurers, the founder of Vanguard and investment professionals representing nearly $700 billion in assets.

Even the conservative majority of the US Supreme Court seems to agree. When they unleashed corporate political spending in Citizens United, Justice Kennedy wrote for the court that prompt online disclosure would enable shareholders to “determine whether their corporation’s political speech advances the corporation’s interests in making profits, and citizens can see whether elected officials are ‘in the pocket’ of so-called money interests.” That transparency, Kennedy said, would “enable the electorate to make informed decisions and give proper weight to different speakers and messages.”

McConnell, Ryan & Co. are making certain that doesn’t happen on their watch.

Another GOP ghost rider ensures we can’t find out when federal contractors slide some money across the table to help out their political patrons.

“None of the funds made available under this or any other act may be used to recommend or require any entity submitting an offer for a federal contract to disclose” any payments for independent expenditures or electioneering communications, says one obscure provision in the Senate bill.

With more than $400 billion in federal contracts on the table each year, Republicans clearly want to keep the cash bar open — invitation only.

Yet another rider closes the door on any moves by the IRS to develop rules to deal with the rampant misuse of nonprofit “social welfare” groups since Citizens United to pour hundreds of millions into election spending while hiding donors’ identities.

Meanwhile, the GOP’s Senate appropriations bill would let loose a new torrent of soft money and create an end-run around the McCain-Feingold campaign reforms passed in 2002. A rider tucked away in the measure would gut existing rules and allow political parties to spend unlimited funds on campaign ads coordinated with candidates, just so long as the candidates don’t control or direct those efforts.

Combine that with the radical repeal of the long-standing prohibition on electioneering by churches and charities hidden in the House tax overhaul bill and we have all the makings of a major escalation in the political spending arms race come 2018.

House Republicans want to eviscerate the “Johnson Amendment,” introduced by then-Sen. Lyndon Johnson in 1954, which makes sure that tax-deductible donations to churches and charities can’t be used for electioneering. That common-sense notion was uncontroversial at the time. But the religious and corporate right have been pushing for its repeal since the Supreme Court blessed corporate campaign cash in 2010, and President Trump promised religious leaders in February that he would “totally destroy” it.

Now they have set the stage to do just that. The House tax bill carries watered down language, but the end result won’t differ much from full repeal. A religious leader will be able to make political endorsements or attacks from the pulpit and in church communications, and then candidates, parties, super PACs and dark money groups can convert those statements into unlimited paid media and micro-targeting campaigns.

Good luck figuring out who bankrolls those ads.

Let’s face it, if sunshine is the best medicine for a democracy, the GOP’s campaign finance riders are pure poison.

This column was written by Arn Pearson in his capacity as a senior fellow for People for the American Way and first published by Moyers & Company here.