Where is the "Justice" in Sessions' DOJ? | PR Watch

Where is the "Justice" in Sessions' DOJ? 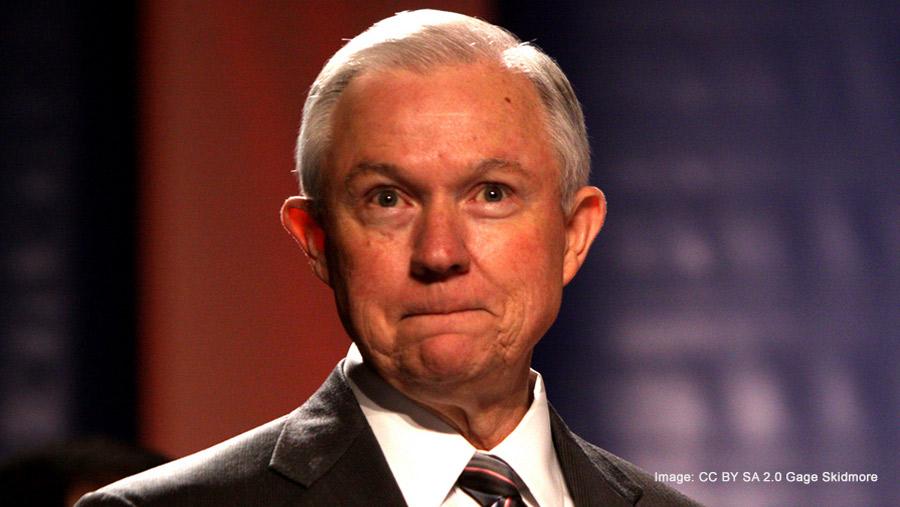 Attorney General Jeff Sessions may be skipping House and Senate Appropriations Committee hearings today in order to explain his actions in the Russiagate scandal to the Senate Intelligence Committee, but that shouldn't stop members of Congress from demanding answers about what has become of the "Justice" in the Department of Justice.

Let's face it, the department's legacy of protecting civil rights lies in shambles after only four months under Sessions' leadership.

Put aside for a moment Sessions' lack of honesty about his meetings with Russian Ambassador Sergey Kislyak, the lack of integrity it took to recommend firing FBI Director James Comey after publicly recusing himself from the Russia investigation, Sessions' pandering to Trump's Muslim travel ban and his demeaning of the judiciary's response, and his gall in installing the lobbyist for one of the nation's biggest polluters as the acting head of DOJ's environmental enforcement branch.

The undeniable fact is that Sessions' short tenure has turned back the clock on civil rights in America.

According to David Cole, Georgetown law professor and the ACLU's national legal director, Sessions has reversed course on "virtually every front" involving protection of civil rights and liberties, "seeking to return us not just to the pre-Obama era but to the pre-civil-rights era."

So, when Deputy Attorney General Rod Rosenstein appears before congressional appropriators in Sessions' place, members of Congress need to demand answers to some tough questions.

1. How does the DOJ intend to protect minorities, women, people with disabilities, and LGBTQ individuals against discrimination in the workplace, schools, and communities when it is starving the Civil Rights Division of resources?

The administration's budget flat-lines funding for the Civil Rights Division at DOJ, projecting cuts of 14 attorneys and 121 staff positions. Sessions has declared his intention to abandon federal oversight of police departments, signaled a reversal in school desegregation efforts and protection of legal immigrants from employment discrimination, rescinded the department's directive on protecting trans students, and appears to have zero plans for protecting people with disabilities.

2. What will DOJ do to protect African Americans and other minorities from discriminatory policing practices?

Sessions is more concerned about "police morale" than protecting the safety and civil rights of Black Americans, despite horrifying abuses and evidence of disparate treatment, such as the compelling report from the Tampa Bay Times in April on shootings of unarmed African Americans. In April, Sessions ordered DOJ lawyers to review the department's reform agreements with police departments around the country, and asked for a delay in a federal court hearing on Baltimore's consent decree. Fortunately, U.S. District Court Judge James Bedar rejected that request and approved the city's sweeping police reform plan two days later.

3. What will DOJ do to stem the growing number of hate crimes against Muslims and other minorities?

The FBI reported a 67 percent increase in hate crimes against Muslim Americans in 2015, and that's likely just the tip of the iceberg, as many crimes go unreported. Hate crimes against immigrants, Jews, and people of color spiked after the election of Donald Trump and continue to be a deeply disturbing problem. The DOJ created a new Hate Crimes Subcommittee, but there has been a "deafening silence" from Sessions throughout a string of violent attacks this year, says the Lawyers Committee for Civil Rights Under Law.

4. Will the DOJ do anything to protect the voting rights of all Americans?

The early signs are not encouraging. Sessions, who called the Supreme Court's evisceration of the Voting Rights Act "good news…for the South," turned his back on racial minorities in Texas when his DOJ reversed the federal government's fully developed litigation position that the state's voter ID law was enacted with the intent to disadvantage minority voters. Fortunately, the court was unpersuaded and struck down the law in April anyway.

5. Even conservatives agree that the War on Drugs has been a failure and has wreaked havoc on families and entire communities. What is DOJ's basis for restarting the war, reversing course on sentencing reform, ordering prosecutors to seek maximum penalties, and bringing back more private prisons?

Both violent and property crime rates have fallen significantly over the past 25 years, and the federal prison population decreased during the Obama administration for the first time since the late 1970s. Recognizing racial disparities in sentencing and prison overcrowding, former Attorney General Eric Holder stopped seeking mandatory minimum sentences for many nonviolent drug offenses, and the surgeon general declared drug prevention a national priority.

But the DOJ is now turning its back on that progress. In May, Sessions announced that he was directing federal prosecutors to seek the maximum possible charges and sentences for all crimes, including minor drug offenses, undermining work in Congress on bipartisan sentencing reform. And Sessions rescinded Deputy Attorney General Sally Yates' directive to phase out federal use of private prisons, despite poor conditions and human rights abuses, causing private prison company stocks to soar and civil rights advocates' hearts to drop.

6. How far is Sessions and the DOJ willing to go in its campaign to vilify undocumented immigrants and punish sanctuary cities?

Sessions, who opposed bipartisan immigration reform legislation as a senator, has embraced President Trump's radical anti-immigrant agenda and indulged in some disturbing racist rhetoric. "It is here, on this sliver of land, where we first take our stand against this filth," Sessions declared while touring the U.S.-Mexico border in Arizona. He has ordered U.S. Attorneys to step up prosecutions of undocumented immigrants, and threatened to withhold--or even "claw back"--federal funding for "sanctuary cities" that refuse to allow their police to be used as immigration agents.

Congress has an urgent responsibility to step in during the appropriations process and demand that Sessions' DOJ protect the rights and liberties of all Americans. Too many lives depend on it.

Arn Pearson is CMD's General Counsel and Policy Advisor. This article was written by Pearson as a senior fellow for People For the American Way, and it was first published by Huffington Post.