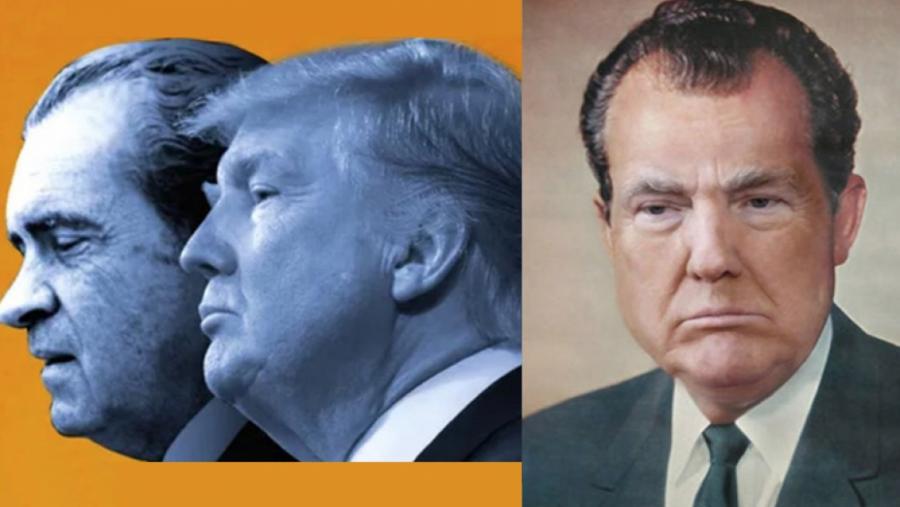 In the world of presidential scandals, “obstruction of justice” is kind of a big deal.

Sure, President Nixon was responsible for overseeing the illegal break-in at the Democrat’s Watergate Hotel headquarters and siccing the IRS on his political enemies. But the #1 Article of Impeachment against him? That Nixon, in violation of his oath of office to defend the Constitution and his duty to faithfully execute the laws of the United States, “prevented, obstructed, and impeded the administration of justice.”

President Clinton ran into the same trouble. Was he impeached for abusing the awesome powers of his office to lure a 22-year-old White House intern into a sexual affair with him? No, he was impeached for lying about it under oath, and for trying to “delay, impede, cover up and conceal” an investigation and evidence related to another sexual harassment case against him.

By this standard, President Trump is in big trouble.

Regardless of what Trump’s relationship with Russia is, or whether he played a role in colluding with Russia to subvert U.S. elections last year, evidence that he has attempted to use the power of the presidency to delay and impede official investigations into the matter grows by the day.

Firing FBI director James Comey in the midst of the Bureau’s active investigation was the first, and most dramatic, sign of the president’s interference with the administration of justice–eerily reminiscent of the “Saturday Night Massacre” in 1973, when Nixon fired special prosecutor Archibald Cox. Still, it had some initial claim to legitimacy, based on Deputy AG Rod Rosenstein’s letter slamming Comey for his handling of the FBI’s investigation into Hillary Clinton’s email controversy.

That pretense, however, was quickly dispensed–by Trump himself–who went off message and told NBC’s Lester Holt he was going to do it anyway, because “this Russian thing with Trump and Russia is a made-up story.”

And, in a twist worthy of John le Carré, Trump later told Russian officials in an oval office meeting that, “I just fired the head of the F.B.I. He was crazy, a real nut job. I faced great pressure because of Russia. That’s taken off.”

Since then, new revelations of Trump’s efforts to can, or at least contain, the FBI’s Russiagate investigation have rolled out on a regular basis. The day after Acting AG Sally Yates warned the administration that National Security Advisor Michael Flynn had lied about his meetings with Russian agents, Trump invited Comey to the White House and asked him to pledge his personal “loyalty.”

A couple weeks later, following Flynn’s forced resignation, President Trump had Comey stay behind after an Oval Office meeting, and then asked him to end the FBI’s investigation into Flynn. “I hope you can let this go,” Trump said, according to a memo Comey wrote.

You’d think that would be enough, but Trump kept up the pressure. Both Trump and his chief of staff, Reince Priebus, called Comey and pushed him to publicly state that Trump was not personally under investigation. And, after Comey confirmed in testimony before Congress on March 20 that a Russiagate investigation was underway, Trump personally contacted two top intelligence officials and asked them to publicly deny any collusion between Trump’s campaign and the Russians. Other senior White House officials also asked to have the Flynn investigation shut down, according to the Washington Post.

“Comey was preoccupied throughout this period with the need to protect the FBI from these inquiries on investigative matters from the White House,” said Benjamin Wittes, a national security expert close to Comey. “Comey understood Trump’s people as having neither knowledge of nor respect for the independence of the law enforcement function.”

When those efforts failed, and the stories started trickling out, Trump shifted gears and tried to publicly discredit the FBI’s investigation. He called it a “witch hunt,” and tweeted, “James Comey better hope that there are no ‘tapes’ of our conversations before he starts leaking to the press!,” which rather sounds like a threat and was interpreted that way by most observers.

Last week we found out Trump has retained an outside lawyer, Marc Kasowitz, to help him handle the Russiagate investigation–the same day former CIA director John Brennan testified before lawmakers that he had been so concerned about Russian efforts to induce members of Trump’s campaign to commit illegal acts last summer that he briefed eight senior members of Congress about it.

And, over the holiday weekend, Trump returned from his first overseas trip to form a War Room–not to defend the nation against the threat of a Manchester-type attack by ISIS–but to defend the White House against the growing scandal.

It’s all too little too late, because the damage has already been done. Federal law says that someone who “corruptly or by threats or force, or by any threatening letter or communication, influences, obstructs, or impedes, or endeavors to influence, obstruct, or impede, the due administration of justice” is acting illegally. Legal scholars debate whether the Constitution allows for criminal prosecution of a sitting president, but all agree that the U.S. Constitution has a mechanism for just this type of scenario: impeachment. And it is well established that a president may be impeached for offenses and abuses of power that are not criminal in nature.

In the current sad state of affairs, the obstruction of justice extends beyond Trump’s overt acts to halt or redirect the FBI’s investigation to other forms of noncooperation with efforts by Congress and the Department of Justice to obtain information about the Russian influence scandal.

The White House refused to turn over documents related to Michael Flynn to the House Oversight Committee in April and missed its deadline to produce Comey-related documents for the Senate Judiciary Committee last week. And several members of the administration–including Flynn, Jared Kushner, and Attorney General Jeff Sessions–failed to disclose their dealings with Russia in either their security clearances or confirmation hearings.

Trump’s repeated attempts to interfere with the Russiagate investigation convinced many members of Congress that appointment of a special counsel was necessary, and now that former FBI director Robert Mueller is on the job, expect the political pressure to intensify.

The question is when will political embarrassment become so acute that the Republican-controlled House feels forced to initiate impeachment proceedings. When the Nixon “smoking gun tape” was made public by Supreme Court order in 1974–in which the president could be heard ordering his chief of staff to tell the FBI, “don’t go any further into this case, period”–the 11 Republicans on the House Judiciary Committee who voted against impeachment said they would have changed their votes had they known.

In Trump’s case, there are already enough smoking guns for a small army, so the question for Congress becomes, “What are you waiting for?”

Arn Pearson is CMD’s General Counsel and Policy Advisor. This article was written by Pearson as a senior fellow for People For the American Way, and it was first published by Medium.