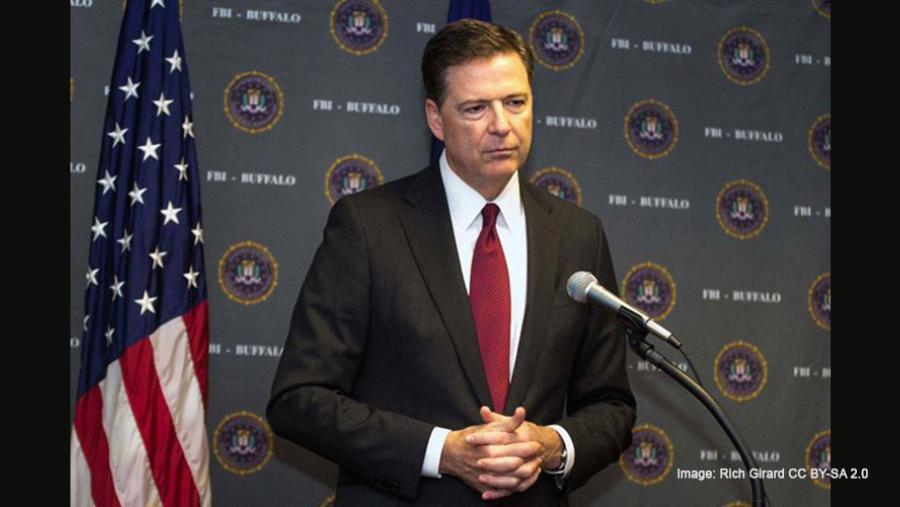 Comey's firing came just hours after CNN learned that the FBI has issued grand jury subpoenas in the Russia investigation and seven weeks after Comey confirmed in front of a House committee that the FBI was investigating "any links between individuals associated with the Trump campaign and the Russian government and whether there was any coordination between the campaign and Russia's efforts."

Comey was serving a ten-year term that ran until 2023.

Although Comey has committed major blunders with his public proclamations about the FBI's investigation into Hillary Clinton's use of a private email server, the timing of Trump's dramatic move—and the emerging pattern of Trump sacking people involved in investigating him and his inner circle—has prompted bipartisan criticism and allegations of a cover-up.

At least two Republican senators, Richard Burr and Jeff Flake, have expressed dismay at the president's action. And for Democrats, it's the last straw.

"If we don't get a special prosecutor, every American will rightfully suspect that the decision to fire #Comey was part of a cover-up," Senate Minority Leader Chuck Schumer tweeted. "First Pres Trump fired Sally Yates, then Preet Bharara. Now #Comey. Doesn't seem like an accident. We must have a special prosecutor."

Comey's firing comes on the heels of dramatic testimony by former Acting Attorney General Sally Yates on Monday before a Senate Judiciary subcommittee. Yates told the panel that, within a week of Trump taking office, she had two phone calls and two in-person meetings with White House counsel Donald McGahn to warn the president about his new national security advisor, Michael Flynn.

Yates had information that Flynn was lying to the administration and the public about not discussing the possible lifting of sanctions with Russian Ambassador Sergey Kislyak in December 2016, and was concerned that it made him vulnerable to blackmail by the Russians.

Trump didn't force out Flynn until after the Washington Post broke the story that Flynn had lied to Vice President Mike Pence about his meeting with Kislyak, 18 days after Yates' warning.

Yates was reportedly fired for refusing to enforce Trump's unconstitutional Muslim travel ban, but the president has done his best to discredit and intimidate her with respect to the Russia scandal.

The White House tried to block Yates from testifying and, hours before the hearing, Trump tweeted "Ask Sally Yates, under oath, if she knows how classified information got into the newspapers soon after she explained it to W.H. Counsel." CNN anchors Dana Bash and John King reacted by accusing Trump of "witness intimidation" for implying without any evidence that the former acting attorney general had committed a felony.

The administration's poor response to Yates' warning about Flynn created the impression that the White House is more concerned about covering its tracks than protecting the integrity of the government and national elections.

Democrats started calling for appointment of special counsel to investigate ties between the Trump campaign and Russia two months ago, following revelations that Attorney General Jeff Sessions lied to the Senate about his meetings with the Russian ambassador and Sessions' subsequent recusal from legal matters involving the Trump campaign.

Despite his recusal, Sessions joined newly appointed Deputy AG Rod Rosenstein in giving Trump a written recommendation that Comey be fired, a move that has ethics experts baffled.

Between Sessions' conflicts of interest, Yates' firing, and the sudden sacking of Comey, any shred of confidence that Congress or the public had in the Justice Department's ability to handle the Russiagate investigation is pretty much shot.

The statute providing for what is now called "special counsel"—which replaced the independent counsel law enacted in the wake of the Watergate scandal in 1999—is designed for just such a situation.

The law requires the AG—or in this case Deputy AG Rosenstein—to "appoint a Special Counsel when he or she determines that criminal investigation of a person or matter is warranted" but "would present a conflict of interest for the Department or other extraordinary circumstances," and "it would be in the public interest to appoint an outside Special Counsel to assume responsibility for the matter."

Now all eyes are on Rosenstein.

The demand for Rosenstein to commit to appoint an independent prosecutor dogged his confirmation hearing and vote. Senator Richard Blumenthal vowed to block his confirmation if he didn't promise to name one, but Rosenstein would not. On April 24, Senate Minority Leader Chuck Schumer said that Rosenstein "committed to me that he would appoint a special counsel if one is required," and Rosenstein was confirmed by a 94-6 vote the next day.

For the six Democrats voting against Rosenstein (Blumenthal, Booker, Gillibrand, Harris, Masto, and Warren), that private assurance was not enough.

Rosenstein was sworn in on April 26 and now has the lead responsibility for any Justice Department probe into the Russian scandal, given Sessions' recusal. Rosenstein said he would make his decision about the need for a special counsel after being fully briefed on the matter, but so far has been mum on the matter.

Meanwhile, Rosenstein has chosen Dana Boente to lead the DOJ division handling the Russia investigation. That hardly inspires confidence; Boente is the U.S. Attorney who replaced Yates when she was fired and after he promised to defend Trump's illegal travel ban.

President Trump's surprise move against Comey, attempts to silence Yates, and repeated claims that the Russia scandal is "fake news," make the need for an independent prosecutor crystal clear.

Just two days ago, before Comey's firing became the drama du jour, Trump lashed out in response to the Senate testimony of Yates and former director of national intelligence James Clapper Jr., Trump with a string of tweets, including one saying, "The Russia-Trump collusion story is a total hoax, when will this taxpayer funded charade end?"

With all the sound and fury emanating from the White House, Clapper's testimony bears repeating:

"The Intelligence Community Assessment concluded first that President Putin directed and influenced [a] campaign to erode the faith and confidence of the American people in our presidential election process. Second, that he did so to demean Secretary Clinton, and third, that he sought to advantage Mr. Trump."

"The egregious Russian interference in our election process is so critically serious as to merit…bipartisan focus by the Congress and the American people," Clapper concluded.

It is too much to expect that the Department of Justice—itself part of the executive branch, under intense pressure from the White House, and now directly involved in Comey's firing—will be able to conduct an investigation into those matters that the American people can believe is untainted by political influence or interference.

Congress and the public need to demand that Deputy AG Rosenstein appoint a special prosecutor now to get to the bottom of who did what, who knew what, and when they knew it in the Russia influence scandal.

This article was first published on Huffington Post by Arn Pearson in his capacity as a senior fellow for People For the American Way.