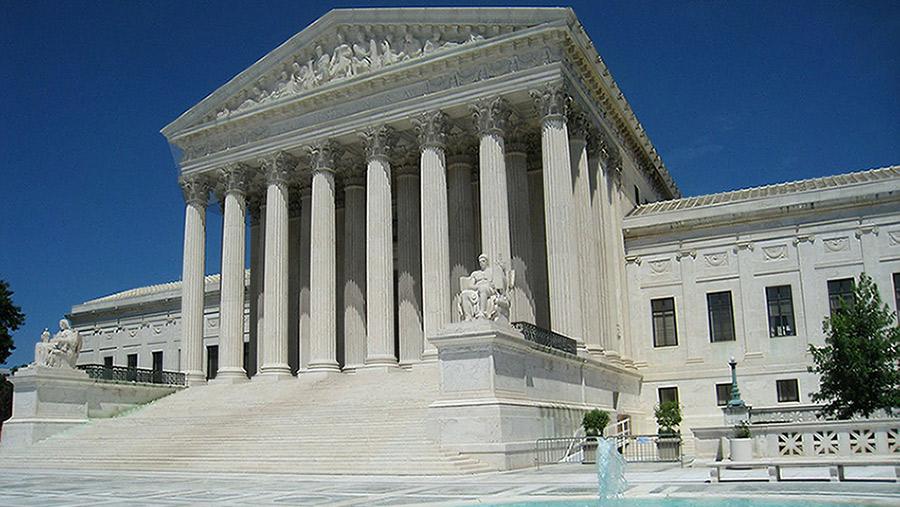 Who the Senate confirms to fill the current vacancy at the U.S. Supreme Court will determine the nature of our elections for decades to come.

The Court is closely divided on the issue of whether to further open the floodgates for unlimited and undisclosed political spending or allow limits designed to prevent corruption and keep powerful special interests from drowning out the voices of voters. The next justice will tip the scales one way or the other.

While the Court may be split on what to do about the influence of big money in politics, the American people are not.

Gorsuch hasn't handled many campaign finance reform cases, but everything in his background and record strongly indicates that he would favor fewer restrictions on political spending by corporations and the wealthy, not more.

At Home in the Corporate World

The son of two lawyers, Gorsuch has spent his life moving in elite legal and corporate circles, and has been a strong ideological conservative since his early days. He attended Columbia University and Oxford, and earned his law degree at Harvard.

From 1995 to 2005, Gorsuch worked at a boutique D.C. corporate law firm representing corporate clients—including the U.S. Chamber of Commerce—in anti-trust, class action, and securities lawsuits, before briefly joining the Department of Justice under George W. Bush and being nominated to the U.S. Court of Appeals for the Tenth Circuit.

The Chamber of Commerce spends more money to influence the federal government than any other organization, and was one of the top political spenders in 2016, making it among the biggest beneficiaries of the Supreme Court's 2010 ruling in Citizens United that allowed corporations to spend unlimited amounts on independent expenditures and electioneering.

Gorsuch hasn't exactly left the corporate world behind since becoming a judge, and has become a millionaire in his own right.

A recent story by the New York Times documents Gorsuch's close relationship with secretive billionaire Phillip Anschutz, who has amassed $12.6 billion in wealth through a sprawling business empire. Gorsuch represented Anschutz while in corporate law practice, and Anschutz played a key role in getting Gorsuch nominated to the federal appeals court.

Gorsuch has been a frequently featured guest at the mogul's annual dove-hunting retreat for the rich and powerful on his Eagle Nest Ranch. At the 2010 retreat, Gorsuch spoke about the importance of judicial nominations, "especially when we live in a system where judges have the last word" on the Constitution and are "empowered to strike down legislation." Gorsuch implored his elite audience "to be vigilant to all threats to our prosperity."

Not surprisingly, Gorsuch's rulings as a federal appeals court judge have consistently favored large corporations over consumers and workers, and indicate a willingness to overturn key Court precedents that have supported efforts to rein in corporate power since the New Deal.

The big question is whether Gorsuch would use his seat on the Supreme Court to further weaken anti-corruption measures when it comes to political spending.

People For the American Way joined 120 other democracy reform and advocacy organizations and 110 House members this week in calling on the Senate Judiciary Committee and Senate leadership to closely scrutinize Gorsuch's views on the influence of big money in politics.

"Will Judge Gorsuch's legal philosophy lead him to strike down even more protections against the use of corporate or personal wealth to influence elections, such as candidate and party contribution limits, or will he permit sensible limits on political money in order to ensure the voices and will of all Americans are fully represented within the political process?" the groups asked.

In Citizens United v. FEC, the 5-4 majority decreed that independent expenditures by corporations "do not give rise to corruption or the appearance of corruption" and that "[t]he appearance of influence or access, furthermore, will not cause the electorate to lose faith in our democracy." In reaching that conclusion, the Court assumed that those expenditures would not be coordinated with candidates, and that they would be disclosed.

Most Americans beg to differ.

Almost everyone in America thinks big money in politics is a problem (94 percent) and that it "empowers wealthy special interests over everyday Americans" (93 percent), according to a recent poll.

Taken to its logical and legal conclusion, the reasoning in Citizens United—that corporations have the same rights as people, that money is speech, and that laws can't distinguish between speakers—puts the little that remains of our nation's post-Watergate scandal reforms at grave risk. So far, the Court has rebuffed challenges to the federal ban on direct corporate contributions to candidates and to most contribution limits, but Gorsuch's confirmation could change that.

In one of his only campaign finance cases, Riddle v. Hickenlooper, Gorsuch wrote a concurring opinion that suggests he would apply the highest level of scrutiny to contribution limits that distinguish between types of contributors. To date, the Supreme Court has applied a lower level of scrutiny to contribution limits, concluding that reasonable limits only impose a marginal restriction on First Amendment rights.

Gorsuch's opinion signals that he might be willing to strike down a ban on corporate campaign contributions on Equal Protection grounds.

Relatedly, Gorsuch joined the majority in the controversial Hobby Lobby Stores v. Sebelius case, which relied heavily on Citizens United to extend religious liberty protections to corporations. Indeed, Gorsuch would like to have taken things even further to hold that even individual owners of a corporation could challenge laws that allegedly impinge on their beliefs.

When viewed together, those two cases support the troubling conclusion that a Justice Gorsuch would be more likely to expand on Citizens United's anti-reform rationale than to walk it back.

Outside spending has more than doubled since Citizens United and our elections are awash in cash—most of it from the super-rich, and much of it secret.

According to a new study by Demos, the Supreme Court's string of decisions deregulating campaign spending over the past decade was responsible for $1.3 billion in spending on the presidential race and 77 percent of the money flowing into competitive congressional races in 2016.

Campaign spending isn't charity. Most big donors have a stake in government decisions and want something in return. The result? Increasingly, concentrated economic power is translating into concentrated political power, and the rest of us are left on the sidelines.

By all appearances, Gorsuch's confirmation to the Supreme Court would move the country further in that troubling direction by granting corporations new rights and crippling government's ability to protect Americans from the exercise of increased corporate power.

Yet three out of four voters want Congress to reject any Supreme Court nominee "who will help the wealthy and privileged wield too much power over our elections."

It's not hard to connect the dots. Confirming Gorsuch would take the country down a path very few of us want, with damaging results for the health of our democracy.

This column was first published in The Huffington Post by Arn Pearson in his capacity as a senior fellow for People For the American Way.