Reince Priebus Promotion Another Big Win for the Koch Caucus 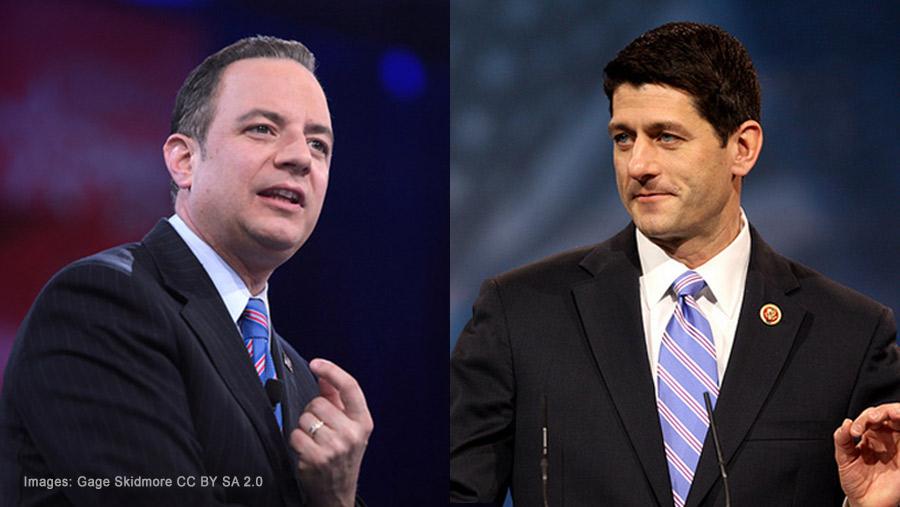 In his first major signal of how he will govern post-election, Donald Trump chose Republican National Committee Chair Reince Priebus as his Chief of Staff. The flame throwing Breitbart exec Steve Bannon will hold an unspecified position as "chief strategist and senior counselor."

The move came to name Priebus to the top spot as a bit of a shock to Trump's base, some of whom referred to Priebus as #Ryansboy, but it is another big win for the Koch wing of the Republican Party. The Kochs already have deep ties to Trump's running mate Mike Pence who took over the Trump transition team this weekend. Top Koch advisor Marc Short, who worked for Pence before heading the Kochs' Freedom Partners, is also aiding the the transition effort reports Politico.

Kenosha native Priebus has long been considered the right-hand man of Janesville's Congressman Paul Ryan, who rose to be Speaker of the House when John Boehner retired. Friends and virtual neighbors, they have worked together for decades in Wisconsin and in Washington.

Bannon on the other hand has hammered Speaker Ryan as "the enemy" of the nationalistic alt-right agenda he has championed.

When Ryan took over as Speaker, Bannon told the Breitbart staff he wanted Ryan "gone" by spring. As Trump's Chief Executive, Bannon was furious that Ryan disinvited Trump to Wisconsin and refused to back him in a meeting with the Republican caucus. Trump slammed Ryan on Twitter "Our very weak and ineffective leader, Paul Ryan, had a bad conference call where his members went wild at his disloyalty." Bannon was criticized by both Democrats and Republicans for his site's extreme writings on race and immigration. The Southern Poverty Law Center characterized Breitbart under Bannon as the media arm of the nationalistic "alt-right."

The selection of Priebus for the top job as Chief of Staff most certainly means that Trump is taking a more conciliatory tone with Congress and Speaker Ryan.

While this will be celebrated by the Kochs, it is a disaster for Trump supporters who want to shake up Washington and "drain the swamp." It is also a disaster for any Trump plans to actually create jobs.

Trump was disdained by the billionaire Koch brothers who refused to share their vaunted data base with him and decided to withhold their support in the presidential race, while spending heavily on down ballot races. During the GOP primary, the Kochs' Americans for Prosperity, Wisconsin Club for Growth and Wisconsin GOP all conspired together to defeat Donald Trump in Wisconsin and elected Ted Cruz. Priebus and Ryan did little to discourage the #NeverTrump movement.

Ryan on the other hand is beloved by the Koch brothers. They share the desire to slash and burn the government so that is it too feeble and too small to regulate health care, the big banks and fossil fuel companies or do any good for ordinary Americans.

In its expose of the criminal investigation of Scott Walker and dark money recently published by the Guardian, Americans for Prosperity leader Matt Seaholm waxed poetic about Ryan. "Despite all of the attention that is currently on Madison, we have one of the brightest and strongest conservative minds in America in Paul Ryan. A poll just released today shows him with an approval rating at 38 percent in his district. While he is doing the heavy lifting for our cause in Washington, we can't let him slip back home. Supporting him through educational efforts across the state will help him and our two vulnerable freshman members of Congress (Duffy, Ribble) to vote for the bill and be a champion for Congressman Ryan's Budget bill," wrote the Koch operative in an email.

And it is precisely the Ryan budget that threatens Trump's signature issue -- jobs. While Trump has promised to put $1 trillion into infrastructure jobs, cancel the Trans Pacific Partnership trade pact and renegotiate NAFTA, Ryan's budget would eviscerate almost the entire federal government except for the U.S. military. An austerity bomb from the Koch caucus could blow up our already weak economy, which some economists say is already overdue for a recession. General Motors laid off 2,000 workers right after the election, the first layoff in six years.

Ryan is also Trump's enemy on trade. Ryan was greeted by whoops and standing ovation at the swank Koch summit in August when he suggested it was incumbent upon the Party to "repudiate" the views of Republican voters who do not support the free trade agenda. Ryan was fighting Trump "for the soul of the party," he said.

The fissures between the Trump wing of the party and the Koch wing of the party will soon show. For instance, the U.S. Chamber of Commerce is still pushing for a lame duck vote on the TPP behind the scenes. Democrats like Sanders and Schumer are looking for opportunities to exploit these splits to advance infrastructure spending.

A Referendum on Bill Clinton Not Barack Obama

As for the Democrats, Clinton lost the Electoral College vote because she lost narrowly in critical rust belt states Pennsylvania, Michigan, and Wisconsin. 55,000 votes in those states would have shifted the results of the election.

Trump trashed NAFTA and denounced the TPP up and down the rust belt, including in Janesville, Paul Ryan's back yard. Both on the campaign trail, in the debates, and in his paid media, he pounded the Clintons for implementing NAFTA and for being part of the Davos class of "global elites" that shipped jobs overseas. The news that Trump used Chinese steel for major construction projects was too little, too late to overcome Trump's early posturing.

The Clinton campaign should have been fully prepared to counter Trump and his appeal to blue collar workers. They witnessed Sanders win Wisconsin, Michigan, and Indiana with a populist message on trade and wages. They were forced to put much stronger language on these topics into the Democratic national platform by Sanders delegates who thought she risked all by having a weaker position on trade than the Republican nominee.

Michael Moore and others who live in the nation's heartland consistently warned of Trump's appeal in the rust belt. "I know that they [the Trump campaign] are planning to focus on Michigan, Ohio, Pennsylvania, and Wisconsin. That's how he can win the election," Moore told the press back in May before his much discussed July prediction of a Trump win. "If he can get those upper kind of Midwestern-type states, then he can pull it off." Back in May, Esquires' Charlie Pierce reporting from the campaign trail noted that Trump was "riding on a wave of pain that he never has felt.”

Trump voters have been characterized as racist across the board, and the campaign emboldened white supremacists. But here in Wisconsin, 13 of the counties that voted for President Obama swung for Trump. In an unprecedented move, Clinton did not come to talk to these voters after the primary, sending surrogates instead. Although consistently behind in the polls, Trump did not give up and made stops in Wisconsin that included speeches in rural areas up north like Eau Claire.

In a nation hungry for change, wildly unhappy with government, and deeply worried about their declining financial circumstances, Clinton ads here was not about the economy or the needs of rural America. Clinton lost rural voters 3-1. She ran more ads in Omaha in search of one electoral vote than in Michigan and Wisconsin combined.

Keith Ellison Steps Up to Lead the Democratic National Committee

There are signs that some in Washington have gotten the message. Party leaders including Bernie Sanders, Elizabeth Warren, Chuck Schumer, and Harry Reid have endorsed Progressive Caucus leader and Minnesota Congressman Keith Ellison for DNC Chair.

Ellison is from here in "flyover" country. He was a Sanders supporter with roots in the Farmer-Labor Party and Paul Wellstone "organizing for action" style of campaigning. He has championed a fairer trading system, higher wages for workers and even a "Robin Hood Tax" to hold the big banks accountable for the financial crisis. He knows that progressive policies win at the ballot box. He has a vision for a revitalized Democratic Party that puts grassroots organizing front and center.

His nomination is not assured; more candidates will be put forward. But Ellison's candidacy is considered a step in the right direction by many as progressives as they vie for the soul of their own party.