CMD Exclusive: Why I Chose to Get Arrested in Defense of Our Democracy | PR Watch

CMD Exclusive: Why I Chose to Get Arrested in Defense of Our Democracy 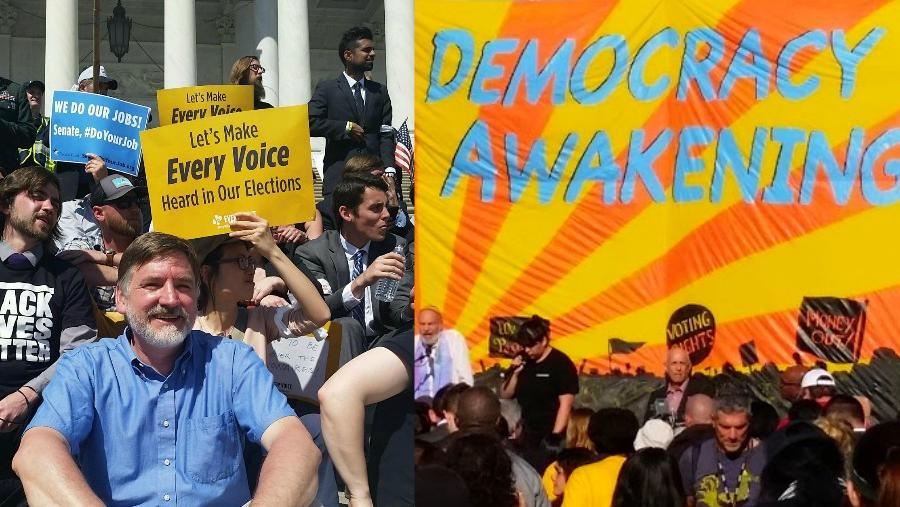 On Monday, I joined hundreds of fellow citizens who were arrested as part of a non-violent act of civil disobedience on the steps of our U.S. Capitol.

I stood with people of all ages and all walks of life as part of a growing movement to reclaim an America that guarantees the unimpeded right to vote for all and a government that works for the people instead of the powerful plutocrats.

I was there as someone who has worked for Clean Elections and ethical government for 20 years, and on behalf of my colleagues at the Center for Media and Democracy. CMD serves as a watchdog against corporate influence on democracy and public policy, and it sounded the alarm on the dangerous Citizens United decision of the U.S. Supreme Court six years ago.

CMD was one of a handful of public interest groups that helped launch the movement for a constitutional amendment to repair the severe damage done to our democracy by an activist Court bent on rewriting the First Amendment in a way that allows billionaires and big corporations to drown out the voices and votes of ordinary people.

The last time I chose to take such a stand was in 1987, as 1,500 of us tried to block CIA headquarters in Langley, Virginia, in protest of the agency’s illegal arming of the Contras during the Reagan Administration.

That time, I made my act of civil disobedience in defense of democracy in Nicaragua.

This time I did it in defense of democracy at home.

For most of the past decade, the corporate right has waged an unrelenting war on American democracy at every level, from the Supreme Court and Congress to State Houses and City Halls across the country.

We see the results every day:

* Brazen gerrymandering and cynical manipulation of voting laws so that politicians get to choose their voters, and not the other way around

Those forces have been at play for a long time, but the gloves came off when the far right gained control of the Supreme Court after Justice Sandra Day O’Connor retired in 2006.

The dramatic deregulation of election spending under the current Court has set loose a flood of special interest money that makes the covert cash payments bagged for President Nixon in the days of Watergate seem quaint.

And the walls between wealth and democracy have been torn down, making the direct relationship between economic power and political power painfully clear

The good news is that the people see it for what it is and are pushing back.

Citizens have organized for countless local fights, won many battles, and are making important new alliances.

Whatever issue is near and dear to your heart, we have learned that the key to progress is taking back our democracy.

As I looked around me on the Capitol steps today, under a blazing hot sun, I saw the faces of people passionate about campaign reform, civil rights, workers’ rights, climate change, and justice for immigrants who had come together to fight for the American dream of democracy and opportunity.

And I felt hope.

Now it’s time to take the fight back home.