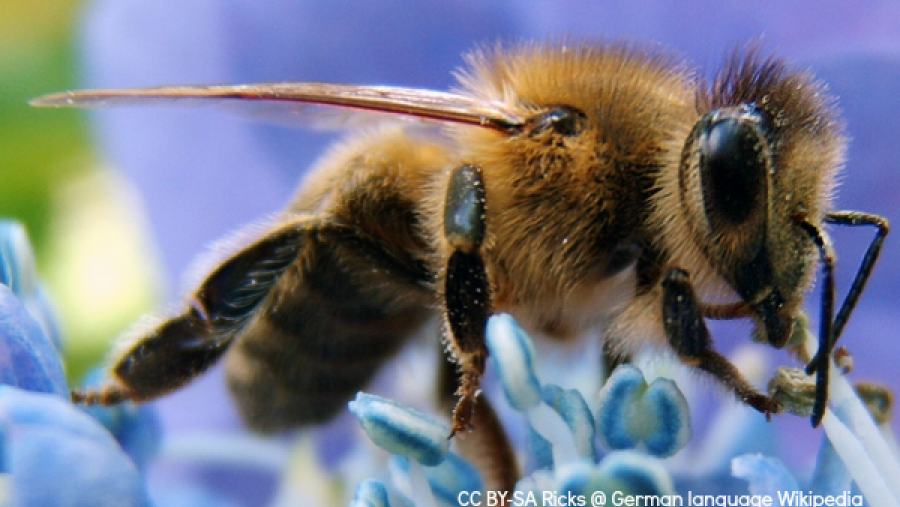 A dangerous new pattern in the bee crisis is alarming researchers and advocates. For the first time ever, beekeepers are losing more bee colonies during summer months than the cold winter months.

Beekeepers have reported losing more than 40 percent of their honey bee colonies over the last year, according to a recently released survey.

Why such alarm among experts and activists alike? Two thirds of crops require pollination by bees--that’s one out of every three bites of food we take.

The survey, conducted each year by the Bee Informed Partnership (BIF) in collaboration with the Apiary Inspectors of America, included responses from 6,000 small-scale and commercial beekeepers from all 50 states to help assess the health of our nation’s honey bee colonies. The BIF receives the majority of its funding from the U.S. Department of Agriculture (USDA).

Types of manufactured chemicals called “neonicotinoids” are increasingly suspected of contributing to the massive losses in the number of bees, even as industry has attempted to blame mites and other things.

These systemic insecticides can block nerve impulses to an insect’s central nervous system, paralyzing them. Neonicotinoids are similar in structure and behavior to nicotine and bees can apparently develop preferences for foods that contain Neonicotinoid pesticides.

U.S. Lags Behind in Protecting Bees

The federal government has been slower to respond, even as states and localities jump in.

This largest ever-recorded die-off, which actually happened during National Pollinator Week, provoked investigations and a legislative task force to review the impact of pesticide use on hive health. The Oregon Department of Agriculture then prohibited the use of products containing dinotefuran, imidacloprid, thiamethoxam, or clothianidin, all types of neonicotinoids, on linden trees and related species.

Since the mass extermination, at least eight municipalities have followed suit with neonicotinoid bans. The federal Fish and Wildlife Service is also slated to prohibit their use at national wildlife refuges by next January.

In April of this year, the Environmental Protection Agency finally took a step forward and announced a moratorium on “new” or “expanded” uses of neonicotinoids while research into their risk to pollinators continues. The U.S. House of Representatives also held a hearing but has taken no action to ban neonicotinoids.

This leaves unabated the hundreds of neonicotinoid products on the market for commercial and home and garden use.

It could be because neonicotinoids are very profitable for some large U.S. companies and their lobbyists.

One of the largest sellers of neonicotinoids is Bayer. The company could lose profits if the U.S. limits the use of its two neonicotinoid products, imidacloprid and clothianidin, which are worth more than $1.5 billion.

Bayer’s response to concerns about hive losses? A "Bee Care Tour” as well as a children’s book "in which a friendly neighborhood beekeeper tells young Toby that the bees are getting sick, but 'not to worry' it's just a problem with mites, and there is special medicine to make bees healthy. Bayer manufactures that 'medicine' -- miticide Check-Mite Plus (coumaphos).”

Perhaps Bayer recognized that including a sales pitch in a children’s book could be viewed as problematic: the second edition of Toby and the Wild Bees omits the mite problem and the chemical solution.

Syngenta also profits from the use of neonicotinoids with its product, thiamethoxam, which is worth $627 million. The company deflects the role of pesticides in the decline of bee colonies by blaming human fear- “The number of bees killed by humans each year dwarfs the numbers of bees killed by any of its other predators.”

Syngenta and Bayer both have legal challenges pending against the EU ban.

Bayer went as far as to sue Friends of the Earth Germany for libel action for their claim that a pesticide manufactured by Bayer, thiacloprid, is harmful to bees. A March 2015 ruling by a judge in Dusseldorf, however, held that the environmental group had a right to raise debate over the issue.

“Bayer has been shown up as a corporate bully, trying to silence campaigners who are standing up for bees,” according to the group.

Additionally, it is worth noting that the chemical giant Monsanto may have a financial stake in these pesticides too. It does not appear to manufacture neonicotinoids, but it does sell pre-treated seeds. The connection between Monsanto and this category of insecticide demands attention considering that about 90 percent of corn in the United States, for example, is treated with neonicotinoids, according to Mother Jones.

In what the FOE calls a "fox-buys-henhouse" situation, Monsanto purchased Beeologics, a $113 million bee research firm, in 2011. And in 2013, Monsanto announced the formation of a Honey Bee Advisory Council, which includes Monsanto executives.

Buzz Kill: Putting the Issue Off to the Next White House

While the European Union takes steps against neonicotinoids, the EPA is planning to delay action until 2018. More bee colonies are expected to collapse in the meantime.

Millions of Americans are calling on Obama and Congress to restrict the use of neonicotinoids and create stronger protections for bees and other pollinators.

People who are concerned about bees or who simply like almonds, strawberries, apples, avocados, cauliflower, cacao, coffee, cherries, grapes, and many other common foods are signing a petition by Friends of the Earth demanding that the U.S. protect our bees and not put this issue off to the next president and Congress to address.

You can make a contribution via indiegogo.com to the Save the Bee campaign for a Bee Sanctuary on Niue at Save the Bee: Creating the Global Bee Sanctuary | Indiegogo https://www.indiegogo.com/projects/save-the-bee-creating-the-global-bee-sanctuary#/story The country of Niue may have part of an answer. "Niue has no honey bee diseases or pests of quarantine concern and arguably has the highest bee health status of the Pacific Island countries which export bee products to New Zealand." Niue Honey Bee Disease Survey (SPC) July 2013. They were brought to Niue many years ago, well before the major honey bee diseases, parasites and chemicals afflicting today’s bees could affect them. They’ve since been effectively isolated in a tropical paradise for bees. Niue could become a global bee sanctuary if the plans of two businessmen succeed. Richard Duncan and the Niue Honey Company's Andy Cory want backing for their plan which could lead to the export of what they call "clean, healthy and gentle bee stock.' They hope to raise tens of thousands of dollars over the next 40 days. The initiative comes after a lift in mortality rates in bee colonies around the world. Mr Duncan says local landowners would be paid a hive rental arrangement. "People of Niue, they're custodians of these bees as well and that's kind of why we're shifting to this social enterprise model because we want to bring them more into this whole operation and make sure they are benefiting as well. The business grows. They get a return. Therefore they take pride in protecting these bees and being custodians of these bees." There are currently 1,000 hives on Niue which has capacity for 4,000. As other remedies are explored for solving the international bee crisis, a bee sanctuary on Niue is critical to ensure there will always be healthy and protected stock from which to draw from in the future - in effect, insurance against the continuing decline of the honey bee and the resulting impact on global food security.