Devastating Walker Budget to Be Finalized 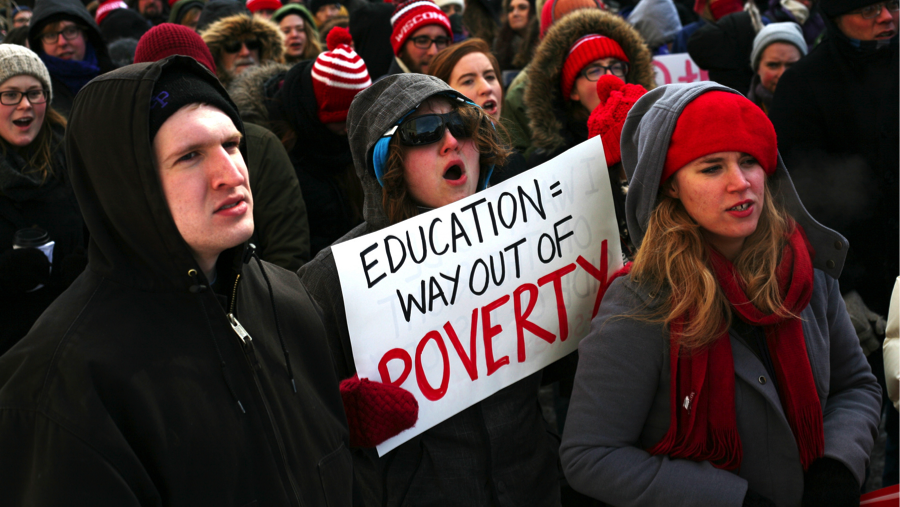 But today the state is facing another $2.2 billion gap, due in large part to a series of tax cuts for the wealthy and corporations that Walker signed into law.

This week, the state’s Joint Finance Committee will work in marathon sessions to finalize the state's biennial budget. Below are some of the lowlights of the dramatic cuts being discussed in Joint Finance:

Walker wants to cut $300 million from the state’s prized public university system, including cutting state funding for instruction, student advising and programming by 25 percent, on top of a $200 million cut in the 2011 budget (after Walker proposed an even larger cut) and a freeze in 2013.

Walker has also proposed another $127 million in direct cuts to the state’s K-12 public schools in next year’s education budget, after $1 billion in cuts in his first budget. The legislature will likely shrink the K-12 cut in response to public outrage.

In the continuing effort to weaken the state's public schools, the budget would also allow Wisconsin schools to hire people without bachelor's degrees to teach subjects like math, science, technology, and engineering.

Walker proposed getting rid of the 1,000-student enrollment cap for the statewide K-12 private school voucher program in the budget, the most significant voucher expansion in the nation, and paying for it by siphoning more money from public schools.

A separate voucher program in Milwaukee already drains $191,000,000 a year from the public school system and, if the cap were to be fully lifted, hundreds of millions more of taxpayers’ money would be taken from public schools and funneled to private and religious schools in the near future. The Joint Finance Committee approved a modified plan in which the enrollment ceiling will increase year by year, and be gone by 2025.

Peacock says, "I’m especially concerned about the harm to our K-12 education system caused by initiating a formula that will steadily siphon off funding from public schools to finance private school vouchers. The erosion of support for public schools districts and deep cuts to the University System are distressing blows to public education, which historically has been the key to Wisconsin’s economic success."

The budget committee also snuck the ALEC “special needs” voucher bill into the budget at the last minute.

This measure would allow vulnerable students with disabilities into the voucher program for the first time, even though voucher schools will not be required to provide the same level of services to special needs students as public schools do.

If Walker had taken federal funding when it became available, the state’s Legislative Fiscal Bureau estimated that the state would have saved at least $200 million in just the last 15 months of the 2013-2015 budget cycle. Newer LFB estimates show additional state savings of at least $345 million over the coming two-year budget cycle, while also bringing $800 million in additional federal spending to the state.

After famously kicking 250,000 Wisconsinites off food stamps in 2014 by refusing to allocate $5 million in federal funds to preserve $276 million in federal benefits, Walker now wants to use the state budget to further increase food insecurity and demonize the poor.

Walker is proposing drug screening and testing for many citizens who utilize public assistance, including unemployment benefits, food stamps, and Medicaid. Joint Finance has already approved this proposal even though it will require a waiver from the federal government and a similar program in Florida has already been declared unconstitutional. Joint Finance also approved a Walker plan to limit lifetime eligibility for the state's Welfare to Work program for vulnerable families to four years.

Walker is proposing to change the state's workers' compensation program, dismantling the state office that currently manages the program and splitting its duties between two other state agencies, despite the fact that the current system is a national model and one of the best functioning in the nation.

As with a number of Walker "ambush" budget proposals, this one was made without consulting those who know best, in this case the state's Worker's Compensation Advisory Council, which has traditionally overseen the program and vetted proposed changes. Some Republican legislators are also now making a last minute push to repeal the state's prevailing wage laws via the budget, after legislative leaders concluded they did not have the votes to pass repeal as a stand-alone bill.

Walker proposed a $5.5 million cut, or a third of the budget, of the state Educational Communications Board, the entity that includes Wisconsin Public Television and Wisconsin Public Radio, including removing all state support for programming. Joint Finance softened these cuts to $2.3 million.

More deep cuts are proposed to the state’s Department of Natural Resources, the conservation and environmental protection agency.

Walker wants to cut another $42 million and 66 positions, including many scientists and educators, from the agency’s budget; freeze the state’s popular Stewardship Fund, under which the DNR funds land purchases for conservation; replace the citizen-led, policy-making Natural Resources Board with an advisory council; and eliminate all state funding for State Parks.

But Walker wants to spare the state’s road-builders of serious cuts by shifting $138 million from the general fund to transportation spending and proposing to borrow an additional $1.3 billion to fund new highway and other transportation building projects.

At the same time, Walker eliminates all state funding for bicycle and pedestrian alternatives and even repeals the state’s existing Complete Streets law that requires road builders to include sidewalks and bike lanes in planning for new road projects where appropriate. Holding to his no-tax-increase pledge, Walker has rejected an alternative proposed by his own DOT secretary that would have paid for new road building by raising the state’s gas tax and raising vehicle registration fees.

Peacock, of the Wisconsin Budget Project, concludes, "Wisconsin lawmakers contend that they have no choice but to slash spending for education and to further restrict eligibility for programs serving low-income people, but these harmful cuts could easily be avoided by accepting federal Medicaid funds and by not phasing in more tax breaks."