-- by Elizabeth Henderson>, also published by the Organic Consumers Association 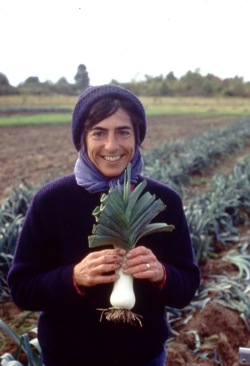 With the financial recovery looking more like the Great Recession, people are turning to the real goods and services of the earth economy. As stock prices rise and the top one percent bloats with wealth, for many in the 99 percent incomes are eroding and job security is a quaint concept from the past.

A stream of books by Michael Pollan, Eric Schlosser, Bill McKibben, Barbara Kingsolver, and others have put local food at the top of the best-seller list. And deeper, systemic analyses (Wayne Roberts' No Nonsense Guide to World Food, Wenonah Hauter's Foodopoly) are helping us understand why the hard times are failing to evaporate and how small local actions can add up to transformative change.

Stressed families are eating out less and planting gardens. Small seed companies are experiencing double digit growth. The number of CSAs all over the country has tripled over the past ten years. Downsized bankers and PhDs are signing up with the spreading network of new farmer programs. And more people are turning to local farms for the ingredients essential to their newly recognized priorities of health and self-reliance.

The pundits tell us that local trumps organic and for many people a certified organic label from a farm 3,000 miles away does not provide the reassurance they seek. But will they be satisfied when they realize that the farms within 100 miles of home use toxic chemicals, underpay their workers, and can barely manage to stay in business? Maybe there is more that people need from farms than comforting proximity.

Becoming a locavore follows from a deeper change in consciousness. Going local provides many benefits at the same time.

Buying from farmers you know is also a good way to ensure food safety. The source of your food is not lost in an endless regression of ever more distant middlemen and brokers. I think I can speak for all local farmers when I say that growing for market is an extension of growing for our own families. Spinach and lettuce from our farms does not need to be irradiated to eliminate pathogens.

Farms that are certified organic wash their produce in drinking-quality water that is tested annually. Our use of raw manure is carefully regulated and must be incorporated in the soil 120 days before harvesting a crop that touches the soil. And there is a lot of research that shows that a biologically active soil is much more likely to eliminate pathogens than a soil that has been fumigated and all the life knocked out of it. Our smaller scale and the required audit trails for organic certification ensure that we can trace back any food people buy from us. We will need our customers' help in preventing the government from imposing on our local farms food safety measures designed for industrial-scale problems.

Local food makes sense for food safety, but what other qualities are necessary for a food supply that will endure?

If buying from a trusted farmer is to be more than a passing fad, we will have to turn away from the quick-profit mentality of the financialized global economy and rebuild local food systems. The first requirement for an agriculture that will last is fertile soil. Healthy soil is the foundation upon which everything else rests. Fertile soils teem with biological life that thrives when tilth is excellent and the mineral content is well balanced. The people who plant and tend the food grown in those soils must be skilled in maintaining fertility and protecting the soils from erosion and contamination. Public policy must support efforts to rid soil, water, and air of toxic pollutants.

During this era of industrial agriculture, farmers have neglected soil health, treating soils as a medium to manipulate with heavy equipment and to douse with chemical fertilizers. According to USDA food nutrient studies, the result has been a steady decline in the nutritional value of vegetables, fruits, and grains. By contrast, recent studies of organically grown foods show that in addition to lower levels of pesticide residues, organic foods have higher levels of vitamins, minerals, and antioxidants than conventionally grown foods. You may pay a few pennies more per pound, but you will save in the long run through reduced payments for medical expenses. Nutrient-dense foods produced in season by local farms provide health care, and that's a wiser strategy than buying medical care.

Farming with organic methods can also help significantly in reducing global warming. According to research at the Rodale Institute, if organic methods were applied to all of the world's cropland, it would be the equivalent of taking 1.5 billion cars off the roads -- 39 percent of the world's carbon would be sequestered in the soil! By using cover crops, composting, rotating, and mulching, organic farms can sequester 1,000 lb of carbon per acre per year. Building organic matter buffers soils -- in extreme conditions of drought and flooding, organic farms are more resilient and out yield farms using synthetic fertilizers. Pimentel's research shows that on average, organic farms use 30 percent less energy than conventional farms by avoiding synthetic nitrogen fertilizers and focusing on recycling nutrients. The production of synthetic nitrogen fertilizers is especially energy-intensive. Evidence is surfacing that as much as 4 or even 5 percent of nitrogen fertilizer turns into nitrous oxide, a greenhouse gas 300 times more potent than carbon dioxide.

For local eating to remain possible for the foreseeable future, our local economy has to be economically viable, balancing food access for everyone with prices that allow farms and other food establishments to be decent places to work. Along with clean air and water, food is a basic human right, recognized in the Universal Declaration of Human Rights and by every civil government except our own. Until we build a movement with the power to create full employment with decent wages for all citizens, we will need to transform the agricultural subsidies currently lavished on agribusiness into mechanisms that make food affordable for those with low incomes.

As Eric Schlosser's Fast Food Nation has made only too clear, most of the people working in our cheap food system are underpaid, overworked, and often undocumented. Farmworkers, packing- and food processing-plant workers, restaurant workers, etc. make minimal wages. The National Labor Relations Act does not cover farmworkers. Most farmers are also not earning living wages and depend on a family member with an off-farm job to provide health insurance and retirement benefits. A 2004 study of organic vegetable farmers in Wisconsin showed that on the smallest farms where a lot of the work is done by hand, the farmers were earning about $5 an hour. On the larger, more mechanized farms, the farmers earned up to $11.36 an hour. An extension agent told me recently that none of the farmers who have been taking his workshops in calculating costs of production were earning more than $10 an hour. Highly skilled and experienced organic farmers I know ruefully acknowledge that, after 20 years of building their craft and their business, they earn about $20 an hour (a fraction of the wages other careers could have provided them). With the many investments needed to start a farm, new farmers are unlikely to make real wages for five to ten years. I am not talking about profits on their investments -- I mean money to live on. For local food systems to survive, we need to bring fair trade home.

In the discussions of the National Organic Program, when USDA explicitly took the position that social justice and workers' rights were not part of their definition of organic agriculture, the Agricultural Justice Project (AJP) began seeking an effective way to bring attention back to the social and economic needs of the farmers and farmworkers whose life work has been the creation of organic and sustainable agriculture. AJP has drafted social stewardship standards, translating the abstract notion of social justice into the concrete terms of pricing for farm products and working conditions on farms. The basic premise of this project is that supportive relations of mutual respect and cooperation among the people who grow and sell food will result in a triple win for farmers, food workers and ultimately the people who eat the food. In 2013, lentils and grains with AJP's Food Justice Certified label from the Farmer Direct Coop in Saskachewan began appearing in food coops in the Pacific NW and in Whole Foods stores across the country and in 2014, the first farms and food businesses in California and New York will complete AJP certification. You can read about AJP standards, their history, and policies at www.agriculturaljusticeproject.org and about the Domestic Fair Trade Association and its evaluation process for fair trade claims at www.thedfta.org.

It's time to take the abstract term "local food system" and turn it into a living network, a community of producers and their co-producers (a term coined by Carlo Petrini, founder of Slow Food). Co-producers are consumers who understand the realities of farming and act accordingly. Not only do they eat the fresh and delicious products of local farms, they also willingly seek out local producers and pay them prices that support their farming. In the everyday activities on farms and gardens and the exchanges at farmers markets, stores, and restaurants, producers and co-producers take responsibility for our most basic needs and ultimately control of our destiny. Together, we can share the whole loaf -- food that is Local, Organic, AND Fair!

Elizabeth Henderson is the co-founder of Peacework Organic CSA (originally Genesee Valley Organic CSA, founded in 1988-89) and the author of Sharing the Harvest, a book about community-supported agriculture.