The Center for Media and Democracy is publishing this op-ed by Gordon Lafer as part of our continuing work to expose international corporate control undermining democratic accountability. A bill has been introduced to Congress to provide fast-track authority for the Trans-Pacific Partnership and Transatlantic Trade and Investment Partnership. Fast-tracking these agreements also puts food safety regulations and labeling for genetically modified organisms (GMOs) and clone and nano products by individual countries at risk, in addition to other serious risks detailed by Lafer below. 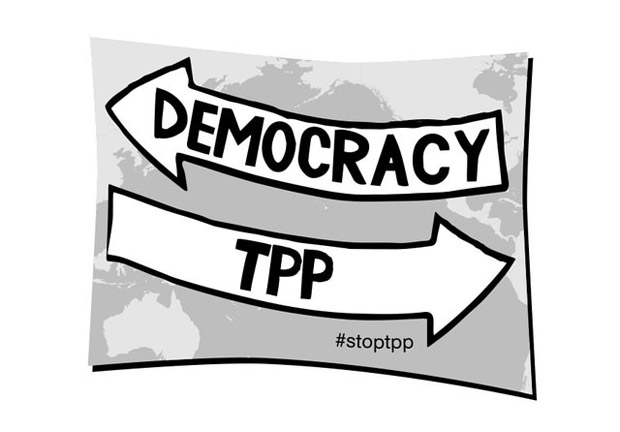 EUGENE – In 2010, I sat across the table from Assistant US Trade Representative Barbara Weisel, who was responsible for negotiating the Trans-Pacific Partnership (TPP), the mega-regional free-trade treaty among Vietnam, Malaysia, and ten other Pacific Rim countries that President Barack Obama's administration wants to conclude in the coming weeks. At the time, I was Senior Policy Adviser for the US House of Representatives' Committee on Education and Labor -- a position that made me the top congressional staff member responsible for upholding labor standards in international trade treaties.

The purpose of the meeting was for Congress to understand what steps the Obama administration was taking to protect American workers from being forced into unfair competition with workers from low-wage trading partners. I asked Weisel what I thought was a simple question: "What is the White House's position on democracy?" Weisel claimed not to understand, so I explained: A majority of congressional Democrats supported the principle that the United States should sign trade agreements only with countries that are democracies.

Other democracies feel the same way. For example, trade agreements negotiated by members of the Commonwealth of Nations (formerly the British Commonwealth) contain just such a provision. The logic is obvious: If we in developed democracies had lacked the right to protest, speak out, organize unions, and vote for representatives of our choosing, we would never have ended child labor or established the eight-hour workday. Having used these rights to raise our own living standards, we should not now put developed countries' workers in direct competition with workers who lack the basic freedoms needed to improve their own conditions.

But my explanation did not help. Weisel stated simply that "we have no position" on democracy. I pressed her on how the White House planned to deal with, for example, Vietnam -- a country where children as young as 14 are forced to work 12-hour days, and where there is no right to free speech, no right to protest, no right to strike, and no freedom of association. "Oh, you can have labor rights without democracy," Weisel insisted. She demurred when asked to name an example.

In reality, the one thing that non-democratic regimes can never tolerate is independent workers' organizations. That is why trade unionists were the first through the gates of Dachau, and why Poland's Solidarity movement posed an existential threat to Communist power throughout the former Soviet bloc.

Indeed, part of international investors' attraction to countries like Vietnam and China is not simply that wages are low, but that the absence of democratic rights promises to lock in cheap labor for years to come. For example, when China revised its labor law in 2008, Apple, Hewlett-Packard, and other members of the US-China Business Council lobbied successfully to limit the expansion of Chinese workers' rights.

While China is not a party to the current negotiations, the TPP is designed to allow additional countries to sign on in the future -- and the Chinese, we can assume, will be courted assiduously. Former US Trade Representative Ron Kirk, for one, noted that he "would love nothing more" than to see China join the treaty.

But the TPP is not really a "trade" treaty at all. Rather, it is a vehicle for corporate lobbyists to achieve what they have been unable to persuade legislators to support through normal means. For example, pharmaceutical companies have insisted that the TPP force all countries to grant 12-year patents on prescription drugs -- increasing their profits while delaying competition from cheaper generic versions. Likewise, tobacco companies are seeking to use the TPP to prohibit developing countries -- which represent the largest cigarette markets -- from adopting new controls on their products.

The TPP's most controversial provision, if adopted, would allow private corporations to sue foreign governments for adopting policies that adversely affect their expected profits. For example, if Vietnam were to mandate six weeks of paid maternity leave for all employees, a foreign factory owner might sue the government, insisting that it either repeal the law or reimburse the company for the cost of providing this benefit. A private tribunal would hear cases and issue binding rulings, with no possibility of appeal to any court or other democratically accountable authority.

This, then, is the future that the TPP holds out: a kind of Potemkin democracy, in which citizens are free to choose their flags and holidays but cannot afford to enact any laws that might reduce international investors' profits. Workers' wages in the US, Canada, Japan, Australia, New Zealand, and other developed countries would be inexorably competed down toward those of lower-wage trading partners, while developing-country workers would find it increasingly difficult -- even in nominal democracies -- to improve their standard of living.

The TPP is being negotiated in utmost secrecy, with even legislators unable to see the full text that is being negotiated, though corporate lobbyists have been treated as partners in the drafting process. This is not surprising: In the US, where almost five million manufacturing jobs have disappeared since the adoption of the North American Free Trade Agreement, and where real wages have stagnated, a majority of voters across the political spectrum are opposed to more such treaties.

At least for the Obama administration, the rush to conclude the TPP negotiations is doubtless driven by the desire to close the deal well ahead of America's midterm election in November. And that, too, is bad for democracy. Indeed, though the US Constitution stipulates that the power to "regulate Commerce with foreign Nations" lies solely in the hands of Congress, the Obama administration is pressing legislators to approve so-called fast-track authority, under which they would have no say over either the TPP's terms or the parties to it -- or even the power to amend the treaty text in any way.

As a political scientist, I am sometimes asked how it is possible for democracies to enact laws that run counter to the interests of the vast majority of voters. They do so, in part, by shunning any commitment to democracy itself. There is no clearer example of this than the TPP, which almost certainly constitutes the single biggest threat to the preservation -- or creation -- of any signatory country's middle class.

Gordon Lafer is a professor at the Labor Education and Research Center at the University of Oregon.