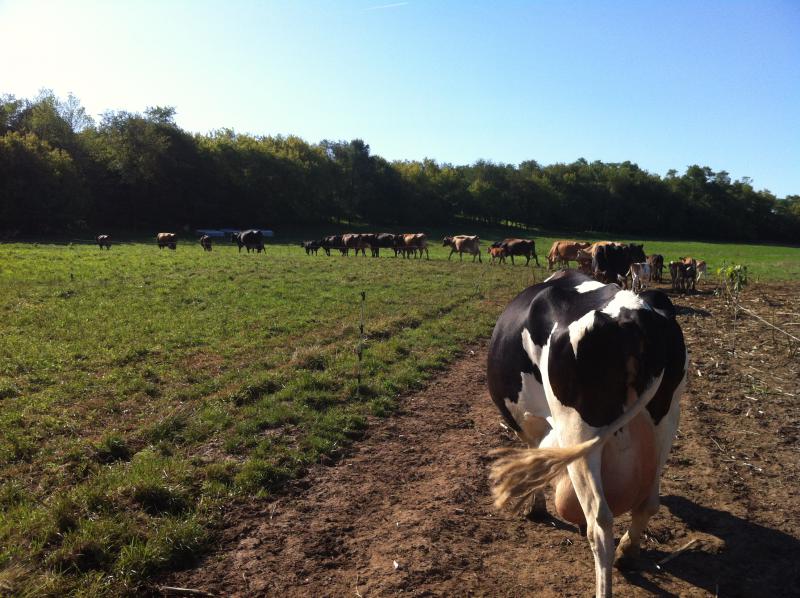 Across the United States, the majority of states allow legal sales of raw, or unpasteurized, milk in one form or another, whether retail, on the farm, or via "herd share" arrangements. A growing number of Wisconsin citizens would like to add this state to that list once and for all.

A bill before the Wisconsin State Legislature, SB236/AB287, would legalize sales of raw milk on the farm without a license or Grade A certification, as long as farmers register with DATCP, label containers of raw milk, post signs on the farm, and ensure that the milk meets the same quality standards as Grade A milk.

The 2013 bill had its first public hearing, before the Senate Committee on Financial Institutions and Rural Issues, on Wednesday. Supporters and detractors -- but mostly supporters -- filled the largest hearing room in the state Capitol for five hours, to give and hear testimony about the proposal.

Dairy industry trade groups such as the Wisconsin Dairy Business Association (DBA) and the Wisconsin Cheese Makers Association (WCMA) participated in a press conference before the hearing in which they claimed to reporters that legalizing raw milk would harm the "Dairyland" state's powerful industry, perhaps irreparably. Citing "swine flu" and spinach as examples of how public fear can hurt food industries, even when an outbreak has nothing to do with the food in question (such as pork and H1N1, or "swine flu"), DBA/WCMA lobbyist Shawn Pfaff and others summoned the specter of foodborne illness outbreaks.

But when faced with questions about current conditions -- Has a recent tragic case of Listeria contamination of pasteurized Wisconsin cheese harmed the industry? Wouldn't an outbreak linked to raw milk in the state's currently relatively unregulated conditions harm the industry? -- Pfaff and others had no answers.

In contrast, dairy farmers and legislators who spoke in support of the bill at the hearing referenced the potential of legal raw milk sales direct from the farm to enable economically vibrant small farm businesses. Retail prices would then go directly to hard-working farmers that can't afford expensive pasteurization equipment. This business model is not possible when milk must be trucked to large processing plants and sold in bulk at prices that often don't cover farmers' expenses, mixed in with other producers' milk, and sold across the country to wholesale buyers.

Representative Chris Danou (D-Trempeauleau) spoke in favor of the bill: "This is exactly the kind of thing we want to encourage in rural Wisconsin: farmers adding value to their own product, getting their neighbors involved in the business," he said.

Some dairy producers did speak against the bill. One, with a 300-cow dairy, said of the 3,000 gallons of milk his farm produces a day, he and his family consume none of it raw. He spoke on behalf of the Cooperative Network Dairy Committee (many large dairy processing companies are organized as cooperatives, but have been criticized by family farm advocacy groups such as the Family Farm Defenders as "just as unethical, corrupt, and greedy as their corporate counterparts like Kraft, Deans, and Nestle").

Another, with a 150-cow dairy, said that for safety reasons they pasteurize even the milk they feed to their calves, adding: "it's pasteurized for a reason."

Yes, you read that right. It is common industry practice at large dairies, which wean calves almost immediately, to either feed milk replacer, which has been pasteurized in the drying process, or (as is the case at this producer's operation) pasteurize milk from the farm before feeding it to the weaned calves.

Notably, no one at the hearing suggested mandatory pasteurization of human breast milk.

That second farmer spoke on behalf of the Wisconsin Farm Bureau, the state affiliate of the American Farm Bureau Federation (AFBF), a right-wing lobbying front for big agribusiness and agribusiness-related industries that works to defeat labor and environmental initiatives, including legislation to ameliorate climate change. The AFBF supports only pasteurized milk or milk products being sold for human consumption.

In contrast, a third farmer, who milks about two dozen cows, testified about his pride in the cleanliness and healthfulness of the milk his cows produce (verified by regular testing, he says), and stated that he not only drinks it raw himself but proudly offers it to others. The calves at his farm stay with their mothers all summer and drink milk straight from the teats. This farmer supports the bill for sales directly to Wisconsin citizens from small farms that produce milk intended to be consumed raw because, he said, "You can trust us" farmers. Farmers know -- and testified to the state at the hearing -- whether or not they consider their milk safe to sell unpasteurized.

"Gin, Cigarettes, and Shotguns," but not Unprocessed Milk

Vince Hundt of the Wisconsin Raw Milk Association, a farmer from Coon Valley, Wisconsin, led off the officially-sanctioned testimony in favor of SB236 by wondering why "gin, tobacco, and shotguns" are legally sold in Wisconsin, but raw milk is not. The American Cancer Society estimates 2,980 deaths from lung cancer in Wisconsin in 2013, while the U.S. Center for Disease Control (CDC) reports that there have been two deaths related to consumption of raw milk or raw milk products from 1998-2011 in the United States (and this number has been questioned).

Statistics aside, Hundt, Rep. Danou, and others pointed out that raw fish, raw meat, raw seafood such as oysters, and raw eggs are also available for sale, and that restaurants may even serve them raw or rare, with warnings of the associated risks printed in the menu.

There will be another public hearing for SB236 in La Crosse on Monday, September 16, according to Senator Dale Schultz (R-Richland Center), who chairs the Committee on Financial Institutions and Rural Issues and is also a co-sponsor of the bill. If the committee approves the bill, the Senate will have an opportunity to vote on the bill. The companion bill, AB287, has been referred to the Assembly Committee on Agriculture, but there is no public hearing scheduled at this time. The bill currently has bipartisan support in both the Senate and the Assembly.

"and ensure that the milk meets the same quality standards as Grade A milk. The farms will NEVER be able to comply with this strict standard unless they test at least twice every milking like modern, clean, safer, more regulated milk plants are subject to! This guy is not very smart (Representative Chris Danou (D-Trempeauleau) spoke in favor of the bill: "This is exactly the kind of thing we want to encourage in rural Wisconsin: farmers adding value to their own product, getting their neighbors involved in the business," he said.) Apparently this representative doesn't understand basic food science practices or have any understanding of how important the real legitimate dairy industry is to Wisconsin. What is the situation here, that dairy farmers that want to sell milk can't buy a pasteurizer? Baloney, they can buy one they just don't want to. The don't care about their customers safety or health! They just want the fast buck in selling a dangerous product. The practice of selling raw milk to the general public discontinued with the invention of the more modern "miracle" food science processing technology called pasteurization was implemented. The reason, because people, as much as 25% of all food related illness before pasteurization came from raw dairy milk. Why would anyone in their right mind want to take us back to the dark ages of sickness, illness and even in extreme cases, death? Where has the common sense in our society gone? Wisconsin has built a reputation of being the dairy state, much of the economy is based on this industry, why would you want to jeopardize it and allow the sale of raw milk? Any consumer that wants to drink raw milk have an option, go buy a cow, keep it on a farm, (rent space) and travel there to get your milk. Claims raw milk has some special properties and is healthier than milk that has been pasteurized is pure baloney and hogwash. The dairy farmer that spouts this kind of nonsense is trying to rip you off, they are modern day snake oil salesmen. For the real story on raw milk consumption, learn from real science and facts, click here: http://www.cdc.gov/foodsafety/rawmilk/raw-milk-questions-and-answers.html and for real life stories of how raw milk can make people very sick, click here: http://www.cdc.gov/foodsafety/rawmilk/raw-milk-videos.html and for a real recent outbreak story, click here: http://www.sciencedaily.com/releases/2012/02/120206143815.htm
the only reason people had to start pasteurizing milk in the first place is because of the industrial revolution. The cows were treated as machines and not animals, and were in extremely poor living conditions, making the cows sick, and the milk unsafe to drink. If your cows are cared for properly you don't have to worry about getting sick from raw milk. You just have to know your farmer and how the cows are raised. There is no way in the world i would drink raw milk from any of the farmers around here. And besides, if you can smoke and drink and chew tobacco, shouldn't you be able to choose the type of milk you want? If its not hurting you then let it be.
"Why would anyone in their right mind want to take us back to the dark ages of sickness, illness and even in extreme cases, death? Where has the common sense in our society gone?" "Dark Ages"...my parents and everyone they knew drank raw milk. Both lived to be in their late 90's. If by Dark Ages, you mean the people of America's "Greatest Generation", then your view of dark is simply one that most rational people would not share. "Pure baloney and hogwash"? Try studying the work of Dr. Weston Price...educate yourself at RealMilk.com for starters.
Raw milk is normally not homogenized and this is the most powerful advantage over normal diary milk because the fat is not likely to pass direct in the blood. It also has more germs than pasteurized milk, which should be taken into consideration by feeding babies and it has to be consumed immideatly I was fed with raw milk and did not have any problems with it.
Yep, it's safe and just about the healthiest thing you can eat or drink. Research it for yourself. It's state of the art science that proves it. We were wrong to start pasteurizing it - the process makes it out of balance, hard to digest and unhealthy. Denying calves access to raw milk from mother is cruel - so cruel it should be illegal.
Raw milk is the best food that a person can eat (or even drink). It build health. Pasteurized milk does not.
While there are some potential dangers consuming raw milk the choice should be up to the consumer. There should then be no recourse against the farmer if any negative health problem occurs. This should be legislated. Quit trying to overprotect consumers of everything and let them make their own choices. Many people do not like changes science has brought in this arena and health problems would not generally have the potential to pass from one person to another