This report exposing the deceptive tactics of the American Petroleum Institute was originally posted at Greenpeace.

Recently, Greenpeace got a rare look behind the curtain at how Big Oil stages citizen support for huge oil companies, when activists got inside a TV commercial shoot in Washington DC. The American Petroleum Institute(API), and their PR firm Edelman, were filming a new series of TV commercials that we learned API plans to air nationally on CNN starting in January. The ads, aimed at the 2012 elections, will aim to demonstrate authentic citizen support for the oil industry's agenda.

Greenpeace disrupted API's astroturf commercial plans by not following instructions and going off script, declaring support for a clean energy future and demanding an end to political interference by the oil industry's lobbyists and PR firms.

Details of the CNN January ad campaign as described by API and other clips are posted below.

Activists (or...citizens) were led through the wardrobe and makeup process, approved for looks by representatives from API and Edelman Blue Advertising, before waiting their turns to go on set. Participants were required to be registered voters, explained an API representative, to protect API from "opponents" who may inquire if actors stating "I vote" are actually eligible to do so. Other recruited actors were being watched by the industry representatives during their takes, repeating lines like "That [energy independence] will come from our own energy resources -- like oil and natural gas."

Late in the morning, the API Edelman team filmed three unexpectedly honest 'citizens' who made clear the script did not represent their real opinions on energy. Greenpeace researcher Connor Gibson of the PolluterWatch project repeated their scripted line, "I vote," then declared, "But I am a clean energy citizen. I will not believe the lies and influence peddling of the American Petroleum Institute, which would leave you to believe that I am a citizen that is okay with giving my tax payer dollars to billionaires and millionaires that run oil companies, the most profitable industry on the planet." Gibson stressed movement away from a "perpetual petroleum future" and finished his speech by telling [http://www.edelman.com/bios/ShowBio.asp?ID=14 Edelman Blue President Robert McKernan] "we need clean sources of energy, like wind and solar." Listen to Gibson's full declaration and read the transcript, below.

In addition to Gibson, two other participants refused to recite API's script. Peter Roquemore of the Sierra Student Coalition and Gabe Elsner, Deputy Director of the Checks and Balances Project showed up to the shoot with the expectation that they would provide their own assessments of American energy. Both decided not to participate once they were fed oil industry talking points on camera.

In a taped conversation with the activists, an API communications advisor described the upcoming Vote 4 Energy advertising package in great detail: "This is scheduled to launch in January in a commercial on CNN, so it'll be a national spot...API—American Petroleum Institute—bought into an election package so anytime CNN does anything like covering the presidential debates, cover a caucus, anything like that, those will be the kinds of programs where the commercial is seen." The commercial debuts on January first. How much the deal with CNN cost remains an open question.

The API rep also said, "we are shooting a ton of people so, you know, you may make the cut, you may not, it all depends on the demographic." Earlier in the morning, API agents were overheard expressing a need for more people of color in the commercials, noting that black and Asian demographics tend to disagree with Big Oil's warped political positions. API has been caught in the past [http://thinkprogress.org/politics/2009/12/10/73167/oil-lobby-stock/ photo-shopping print ads] to include racial minorities in purchased iStock Photo to make their already fabricated supporters appear more diverse.

Luckily, the leaked memo was revealed on the front page of the [http://www.ft.com/intl/cms/s/66d1d9ba-8933-11de-b50f-00144feabdc0,Authorised=false.html?_i_location=http%3A%2F%2Fwww.ft.com%2Fcms%2Fs%2F0%2F66d1d9ba-8933-11de-b50f-00144feabdc0.html&_i_referer=#axzz1fsHIxdXQ Financial Times] and covered in the [http://www.washingtonpost.com/wp-dyn/content/article/2009/08/15/AR2009081502698.html Washington Post], Guardian and on Huffington Post. The New York Times called it "Another Astroturf Campaign," revealing what a fluke Energy Citizens was before Chevron had the chance to bus its employees to API's first round of staged rallies, the majority of which were organized by oil lobbyists. Greenpeace called attention to API's tactic by installing astroturf on the front entrance of API's Washington DC headquarters, featuring the logos of its largest members: ExxonMobil, Chevron, Shell, and BP and the banner CLIMATE FRAUD: FUNDED BY BIG OIL. 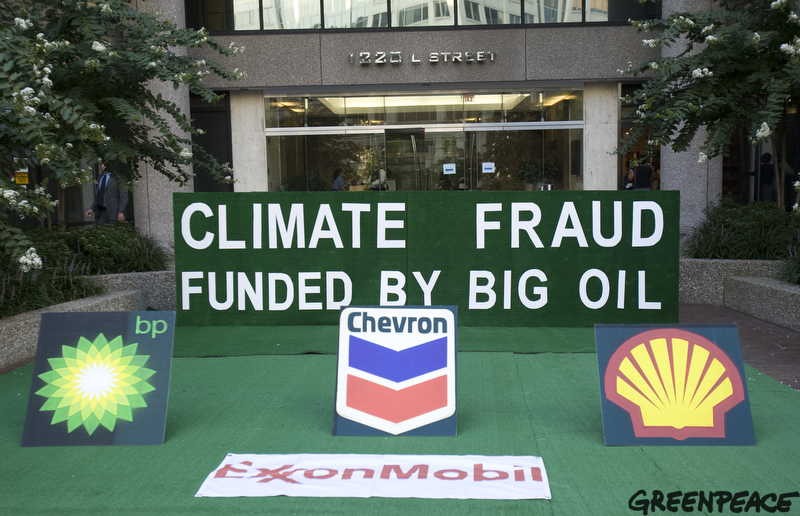 Given the nature of API's newest commercial shoot, its Energy Citizens rallies where participants had to be instructed to clap (see (Astro) Turf Wars), and its repeated use of iStock Photos to boost the perception of public support for Big Oil, it is reasonable to question the authenticity of similar PR moves like the "1'm One" or "One in a Million" advertising campaigns, also run by PR company Edelman, which purport to show real people who work for the oil industry.

The American Petroleum Institute, the top lobbying firm for the oil and gas industry, has spent at least [http://www.opensecrets.org/lobby/clientsum.php?id=D000031493&year=2011 $30 million] peddling its dirty influence to our federal government in the last five years, and recently announced it would start funneling oil money to politicians. With it's $200,000,000 Big Oil budget, API has played a key role in the industry's climate denial movement by funding junk scientists like [http://www.greenpeace.org/usa/en/campaigns/global-warming-and-energy/polluterwatch/koch-industries/CASE-STUDY-Dr-Willie-Soon-a-Career-Fueled-by-Big-Oil-and-Coal/ Willie Soon] and coordinating a public relations strategy to create doubt over climate change.

Recordings from Inside the American Petroleum Institute Vote4Energy Commercial Shoot:

API explains the commercial deal with CNN (click to listen)

API: "Just so you know, I don't know how much they told you, but this is scheduled to launch in January in a commercial on CNN, so it'll be a national spot...API--American Petroleum Institute, uh, bought into an election package so anytime CNN does anything like covering the presidential debates, cover a caucus, anything like that, those will be the kinds of programs where the commercial is seen."

Greenpeace Activist: "So what date is this going to launch?"

API: "And so to your point though, we are shooting a ton of people so, you know, you may make the cut, you may not, it all depends on the demographic."

API: "And I'm sure they checked with you but you're a registered voter and all that stuff?"

API: "We, um...the only reason is really a lot of the, you know, the script is saying 'I vote,' 'I vote for energy,' 'I vote for...' so, we at least want to be genuine in the sense that you are a registered voter. As you can imagine, there are some opponents of the oil and natural gas industry and so we always have to be very careful of, you know, what our opponents could use against us. And that is, you know, if they found out that we were using people who aren't actually registered voters, or not even eighteen, or whatever, so..."

"No they put them in costumes and then the makeup lady takes care of them and then they walk them out, and all they do is the director feeds them the lines and he talks them through it. It's...he'll [Gibson] be fine."