Since 9/11, Koch Industries Has Fought Against Tougher Government Rules on Chemical Plants

In the government's "worst case" scenarios, the millions working or living near the plants could be threatened by explosions, chemical spills or clouds of deadly gas, federal records show. Among the hazardous chemicals stored and used at Koch sites are formaldehyde, chlorine, anhydrous ammonia and hydrogen fluoride.

Koch's own reports to the U.S. government were reviewed by iWatch News. The records, known as risk management plans, are maintained by the Environmental Protection Agency. Access is strictly controlled: members of the press and public can only examine 10 plans per month, under the watchful eye of EPA officials.

A decade after the worst terrorist attacks on U.S. soil, Koch insists that its neighbors are safe, and are adequately protected by federal and state regulations.

All chemical firms are "vulnerable to human error, acts of nature, theft and sabotage," Koch acknowledges. "It is impossible to completely eliminate every threat."

But "chemicals are at the heart of many of our businesses," the firm says, in a section titled "Chemical Safety" on Koch's website. "The ones used in our facilities are handled with care and by trained professionals."

The Kansas-based conglomerate vows that it "places compliance and safety before profit."

Koch did not respond to repeated inquiries for comment to this story over a week's time. 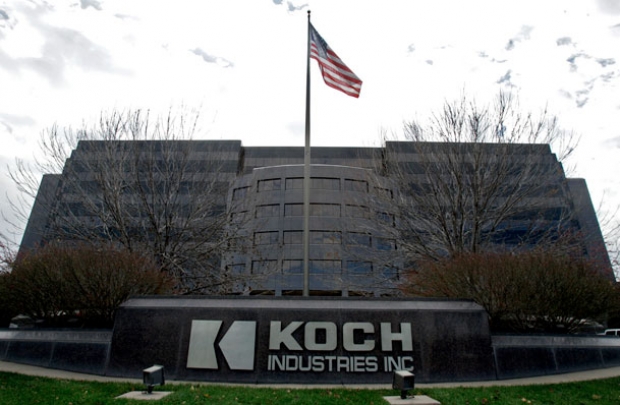 Charles and David Koch, the owners of the country's second-largest private corporation, are libertarians of long standing, who contend that government regulations, taxes and subsidies stifle individual initiative and hamper American competitiveness. In recent years, the Kochs have played an increasingly public role as financial angels for conservative causes, politicians and foundations.

In Washington, Koch is a leader in efforts to oppose counter-terrorism proposals that would require that petrochemical firms use less hazardous practices and chemicals.

Lobbying disclosure reports, filed with Congress, show that this year Koch has deployed at least 20 lobbyists, from four lobbying firms, to shape legislation on Capitol Hill and the regulatory work of federal agencies.

Aside from its own in-house team of lobbyists, Koch has hired the firms of Hunton & Williams; Siff & Associates, and Mehlman Vogel Castagnetti to lobby the Senate, House of Representatives, the Treasury Department and the Department of Homeland Security.

The Center for Responsive Politics puts Koch at the top of its list of the 80-odd firms, local governments and other groups lobbying Congress to shape or prevent passage of a wide-ranging chemical security bill. Koch is ranked above organizations like the American Chemistry Council, the U.S. Chamber of Commerce, and corporations like Halliburton or Bayer.

According to the CRP database, the chemical safety legislation has been one of Koch's most important priorities in the last four years, during which the firm has spent $44 million lobbying in Washington on this and other issues.

The threat of a terrorist attack may have been diminished by the death of Osama bin Laden, but Al Qaeda maintains an interest in attacking American power and utility plants, the U.S. government says.

A July 19 intelligence report sent by the Department of Homeland Security to state and local law enforcement agencies noted that "violent extremists have, in fact, obtained insider positions" and that "disgruntled employees and adversaries seeking to use employees to obtain specific information about facility operations continue to pose a threat to utilities and other critical infrastructure."

Congressional calls for change, endorsed by the Obama administration, would restructure federal rules and inspection procedures and require the use of "inherently safer technology" (IST) to reduce the potential consequences of a terrorist attack.

If paper plants could manufacture the precise amounts of chlorine that they need on site, or use a different chemical process to bleach pulp, for example, they would reduce the risk that terrorists can find chains of rail cars or yards of storage tanks filled with toxic chemicals to target.

House and Senate bills that would require that firms use safer technologies have been the top priorities of Koch lobbyists working on the issue. On its website, Koch says that IST proposals are "onerous" because they "would require manufacturers to use certain products and processes without regard for practicality, availability or cost."

"Mandating IST would result in even more job losses and higher consumer prices as American manufacturers struggle to comply with the new regulations and compete with overseas manufacturers," Koch says.

Under the current regulatory regime, Koch notes, "not one incident of terrorism has occurred."

According to the iWatch News analysis of EPA records, the Koch facilities with the greatest number of neighbors who would be threatened by a worst case release or terrorist attack are:

The Koch Industries safety and environmental record at its facilities has improved in the last decade. The firm has won government and industry awards, after several embarrassing incidents in the recent past, including a 2001 guilty plea and $20 million in fines and remediation, for covering up the release of hazardous benzene at the Corpus Christi refinery.

Koch bought Invista from DuPont in 2004, and reported to the EPA that the company's own audit of its new acquisition had discovered more than 680 violations of environmental and emergency planning and preparedness law at 12 facilities, including the one in LaPorte. Koch paid a $1.7 million civil penalty in 2009, and agreed to make up to $500 million in improvements.

Koch also paid a $6 million criminal fine in 2000 for illegally discharging between 200,000 and 600,000 gallons of aviation fuel into a waterway near the firm's Flint Hills refinery in Rosemount, Minn.

A 1996 incident offered a lesson in miniature of the dangers of spills and vaporization of hazardous substances. A Koch pipeline carrying liquid butane through Texas ruptured, releasing a white, almost transparent fog near a residential area. A pickup truck carrying two men through the cloud ignited the butane, and they were burned to death. Forty-five families lived nearby.

Government gets tough after 9/11

Congress first passed legislation in 2006 giving the new Department of Homeland Security the authority to regulate chemical facilities in the face of terrorist threats. In 2007 the department issued an interim rule for anti-terrorism standards, requiring that facilities with a prescribed amount of dangerous chemicals must report to DHS. The law has been extended on a year-to-year basis.

The Justice Department called the threat of a terrorist attack on chemical facilities "real and credible."

"Experts agree that chemical facilities present an attractive target for terrorists intent on causing massive damage," said a 2006 Government Accountability Office report. "Terrorist attacks involving the theft or release of certain chemicals could significantly impact the health and safety of millions of Americans."

"The disaster in Bhopal, India, in 1984, when methyl isocyanate — a highly toxic chemical — leaked from a tank, reportedly killing about 3,800 people and injuring anywhere from 150,000 to 600,000 others, illustrates the potential threat to public health from a chemical release," the GAO said.

The chemical safety rules were filled with exceptions, however. They exempted facilities owned by the departments of Defense and Energy, nuclear power plants, water and wastewater utilities (which often use chlorine) and those regulated by another law, the Maritime Transportation Security Act of 2002.

Under the less stringent MTSA, some of Koch's biggest facilities, like its refinery in Minnesota, are regulated by the U.S. Coast Guard, though located hundreds of miles from the shores patrolled by the Coast Guard.

More than 38,000 of the nation's chemical facilities ultimately registered with Homeland Security, and more than 7,000 were initially designated "high risk." After further inspection, some 4,755 were put in four tiers, with 221 in Risk Tier 1, the most dangerous, and 573 in Risk Tier 2. For security reasons, Homeland Security does not identify which facilities are in each tier.

A central controversy in congressional debate is the call for "inherently safer technology." The Obama administration has supported proposals to give the government the authority to order a Tier 1 or Tier 2 facility to switch to safer chemicals, and to require that all high-risk facilities at least assess the consequences of such a change.

"These assessments may lead to changes in chemical process when deemed safer, more reliable, and cost-effective," says the nonpartisan Congressional Research Service, in a 2011 study.

The CRS study, however, acknowledges that the proposed IST rule is controversial.

A refinery that substitutes sulfuric acid for the more dangerous hydrogen fluoride, the CRS study notes, may have to employ so much acid that it raises "different dangers" for nearby communities.

A 2005 GAO report recognized the danger that terrorists could target readily available chemicals, like chlorine, causing a "catastrophic" event. "Exposures to chlorine could burn eyes and skin, inflame the lungs and could be deadly if inhaled," the GAO reported.

But that report also noted the cost of switching to safer alternatives. Wastewater treatment plants can replace chlorine with sodium hypochlorite, the GAO said, but for each plant it would "increase annual chemical costs from $600,000 for gaseous chlorine to over $2 million for sodium hypochlorite."

In some cases, the costs seem justified. On Sept. 11, 2001, a chain of railroad tanker cars filled with toxic chemicals, including chlorine, sat at a municipal wastewater treatment plant across the Potomac River from the Pentagon as it was attacked. At that time, the GAO noted, "the population within the plant's vulnerable zone was 1.7 million people."

Within weeks the plant stopped using chlorine and adopted a safer alternative.

The original article can be found here. For more, see Farrell's April 2011 article Koch's web of influence and Cole Goins' August 2011 article What's it like living near a chemical plant?, both also on iWatch. To find the chemical plant near you, download the spreadsheet of data gathered from the risk management plans that Koch files with the EPA.