GOP's Medicare Plan Would Be a Windfall for Insurers | PR Watch

GOP's Medicare Plan Would Be a Windfall for Insurers

Rep. Paul Ryan's plan to privatize Medicare would accelerate a trend started several years ago by corporate CEOs and their political allies to shift ever-increasing amounts of risk from Big Business and the government to workers and retirees. 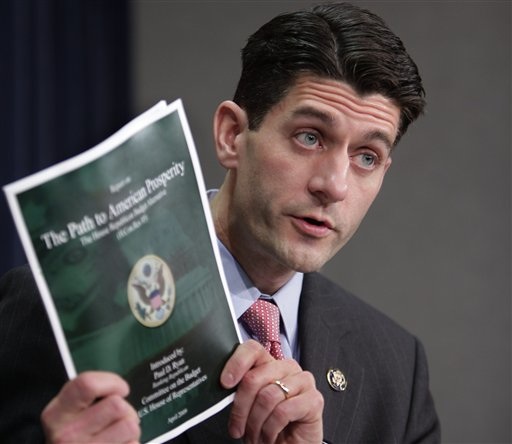 If enacted, the Ryan plan would represent a windfall of unprecedented proportions for insurance corporations and other businesses.

For millions of average Americans, many of whom already are finding it impossible to save for retirement, it would represent financial calamity. The nation's middle class would pay dearly for Ryan's proposed shredding of the social safety net that Medicare currently provides.

Ryan, chairman of the House Budget Committee, wants to dismantle the Medicare program and replace it with a system of vouchers. Starting in 2022, the government would give the average 65-year-old Medicare beneficiary $8,000 a year to buy coverage from a private insurer. That's the amount health care analysts estimate will be what Medicare will spend on every 65-year-old in 2022 if the government doesn't turn it over to private insurance companies.

While that might sound fair on the surface, it would actually be a very bad deal for people who turn 65 that year, compared to those who turn 65 in 2021. That's because commercial insurance plans are much more expensive, and operate far less efficiently, than the current Medicare program.

The amount of money commercial plans actually spend to pay medical claims has been declining rapidly over the past several years, while the amount they spend on administrative activities such as marketing and underwriting -- and to pay executives and reward shareholders -- has been increasing. That's why Congress included a provision in last year's health care reform law to require insurance firms to spend no more than 20 percent of their policyholders' premiums on overhead. By contrast, the current Medicare program spends just 3 percent of its budget on administration.

The nonpartisan Congressional Budget Office (CBO) says the $8,000 voucher won't be nearly enough for seniors to buy comparable coverage from private insurers and pay the additional out-of-pocket costs that those insurers would require them to pay. The amount the average 65-year-old would have to shell out to buy private insurance in 2022, according to the CBO, will actually be $20,510. Seniors would have to pay the difference -- $12,510. If Medicare is not privatized, the difference would be $6,150.

Here's why this would be a dream-come-true for the insurance industry: The more health plan enrollees have to pay out of their own pockets, the less insurers have to pay for medical care. The money that insurers avoid paying out in claims goes straight to their bottom line -- and into shareholders' pockets.

Insurers have been shifting more and more of the cost of care to their policyholders over the past several years by enticing -- or pushing -- them into plans with ever increasing deductibles. This trend is part of what Yale professor Jacob S. Hacker called "the personal responsibility crusade" -- making people more responsible for the management and financing of the major economic risks they face -- in his 2006 book, "The Great Risk Shift."

This crusade has been led by Republicans and insurance company executives who have been saying for years that the best way to control medical costs is for Americans to have more "skin in the game." That's an expression that former Aetna CEO Jack Rowe used often before he retired in 2005, the year he made $22.2 million. It was also a sound bite favored by the CEO I used to work for, CIGNA's Ed Hanway, before he retired in 2009. Hanway's total compensation that year was almost $111 million.

That decline, by the way, was the continuation of another trend that began as the Clinton era was ending and the George W. Bush era was beginning. Median household income in the United States peaked in 1999 at $52,388 (adjusted for inflation). It fell more than $2,000 during the eight years of the Bush administration.

Ryan's Plan Will Throw the Elderly Back into Destitution

With household incomes declining, Americans have had far less money to put into retirement. According to a recent survey conducted by Opinion Research Corp. for America Saves and the American Savings Education Council, less than half of current workers are saving enough to have a "desirable standard of living in retirement."

If workers are having this much difficulty saving for retirement, where in the world will they find the money to pay what Rep. Ryan would make them pay for Medicare coverage when they turn 65?

Ryan's "blueprint" is one that will take America back to the pre-1965 days when senior citizens were losing their homes and their farms to pay for medical care. They were becoming destitute -- and dying much earlier than they are today -- because insurers would not sell them coverage because they were too much of a risk to insure, and there was no safety net for them.