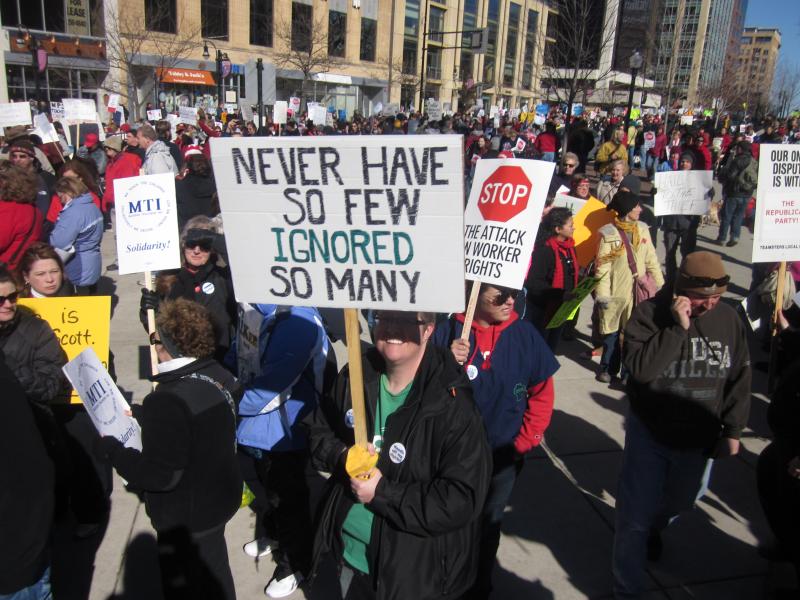 While both chambers of the State Legislature passed the bill and Governor Walker has signed it, the bill does not become law until it is published by Secretary of State Doug LaFollette. The decision bars LaFollette from publication until a full hearing takes place on Tuesday, March 29. Judge Sumi, appointed to the bench by a Republican governor in 1998, is the second judge to issue a temporary restraining order against the state, following Judge John Albert's decision earlier this month requiring access to the Capitol building.

Dane County District Attorney Ismael Ozanne brought the case challenging the March 9 vote on grounds that it violated Open Meetings laws. Those laws state that public notice of meetings must be issued 24 hours in advance, and while there is an exception when "for good cause such notice is impossible or impractical," there still must be two hours advance notice. Republican leaders gave only one hour and forty minutes advance notice for the Joint Conference Committee meeting that amended the "budget repair bill," and no notice for the subsequent Senate floor vote that passed it.

In finding against the state, Judge Sumi's ruling emphasized the importance of open government in a democracy. "This was something that would and did catch the public unaware," Sumi said, "in what ended up being a closed session of a body in propelling legislation forward."

According to Phil Neuenfeldt, President of the Wisconsin State AFL-CIO, "Judge Sumi confirmed today what we knew all along – that the bill stripping hundreds of thousands of hard working Wisconsinites of their voice on the job was rammed through illegally in the dark of the night."

The March 9 vote occurred after weeks of massive protests bill supporters may not have anticipated. Governor Walker introduced his union-busting budget repair bill on February 11 and expected to force it through the legislature with minimal review or consideration. Senate Democrats stymied that effort, depriving the Senate of the quorum necessary for passing budget bills by taking an out-of-state-trip. The delay allowed the public to understand the bill's harsh impact on working families and Wisconsin communities, and opposition to the bill grew as GOP poll numbers declined. On March 9, after weeks of massive protests, and after weeks of Governor Walker insisting that union-busting was a necessary budget measure, Wisconsin Republicans amended the bill to make it "non-budgetary" and only limit collective bargaining. While this exposed union-busting as a purely ideological pursuit, it also allowed the Senate to pass the bill without Democrats. All of this may have been unethical and illegitimate but only the lack of notice has been deemed illegal.

Despite Judge Sumi's rebuke, it appears that the Republican-controlled legislature can pass an identical bill that complies with Open Meeting requirements if Governor Walker calls a Special Session. Spokespersons for Governor Walker and legislative leaders have not stated they will do so but their lawyers are expected to appeal. Governor Walker's office issued a statement saying "[t]his legislation is still working through the legal process. We are confident the provisions of the budget repair bill will become law in the near future."

Still, many bill opponents see the decision as a victory. "State employees believe that nobody is above the law. We are gratified to see some of our so-called 'leaders' finally held accountable for their illegal actions," says Marty Beil, head of the Wisconsin State Employees Union AFSCME. "They may think they can get away with ignoring the vast majority of Wisconsin citizens by attacking worker freedoms, but they simply cannot continue ignoring the law if we want to continue calling our state a democracy."

While Judge Sumi will decide whether to permanently enjoin the law on March 29, the state's Republican leadership is also facing other legal challenges. Because the Capitol building was in lockdown while the legislature voted on the union-busting bill, Judge John Albert is considering whether Department of Administration Secretary Mike Huebsch is in contempt of Albert's Capitol access order. In late May, Judge Albert will decide whether to make permanent his temporary restraining order guaranteeing an open Capitol building. Additionally, the Wisconsin Employment Relations Commission is considering an unfair labor practices complaint from the state employee union AFSCME, alleging Governor Walker has violated his duty to bargain in good faith.

The Madison-based Center for Media and Democracy has been reporting live on the politicians, corporations and spinmeisters involved in the recent events in Madison and across the country. Visit us at PRWatch.org.