Nearly all of the clients behind the video news releases (VNRs) tracked by the Center for Media and Democracy (CMD)—47 of 49—were corporations. (The other two were professional associations.) Those 47 corporations were responsible for 34 of the 36 VNRs documented in this report.

WCTI-12 airs a VNR from DaimlerChrysler

Why are news programs a major target for corporations, even—and especially—for those with large advertising budgets? One reason is what public relations practitioners call the third party technique. Praise for Brand X or for Corporation Y has much more credibility when it's relayed by a seemingly-independent reporter or commentator in a news setting, rather than by an actor in a commercial—or by a corporate spokesperson in any setting. That's especially true, since the level of trust accorded corporations has declined in recent years, according to bi-annual surveys carried out in the United States and 19 other countries for the World Economic Forum.

Another reason corporations use VNRs and satellite media tours (SMTs) is that, while television still commands large audiences, TV ads don't. At a March 2006 conference of the Association for National Advertisers, speakers admitted that TV viewers are increasingly turning to other media when ads come on, or skipping ads completely by using digital video recorders. Nearly 80 percent of national advertisers believe that TV ads are less effective than they were just two years ago, according to a survey presented at the conference. 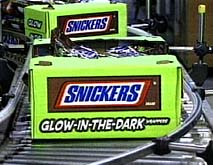 Indeed, the vast majority of VNRs documented in this report are little better than ads. Twenty-three of the 36 VNRs prominently featured specific products offered by the client(s) behind the VNR. VNRs in this category include one produced for Trend Micro on its Internet security program; one produced for two clients, Masterfoods and 1-800-Flowers, on Halloween-themed candy and flowers; and one produced for three clients, Panasonic, Namco and Techno Source, on their games, gadgets and related products.

Four other VNRs featured services or information related to products offered by the client behind the VNR. VNRs in this category include one produced for Sallie Mae on college loans, one produced for General Motors on online car shopping, one produced for Jackson Hewitt (an income tax services company) on tax-deductible donations, and one produced for Towers Perrin (a "professional services firm") on employee management practices.

Two other categories of corporate VNRs shunned the hard sell for a more subtle approach. Three VNRs focused on their client's good deeds. VNRs in this category include one produced for Capital One on the bank's efforts to protect seniors against financial scams, one produced for General Motors on its new headquarters in Detroit, and one produced for DaimlerChrysler on its child seat safety program.

The last four corporate VNRs associated the client with a desirable profession or a cutting-edge product not (or not currently) available to consumers. VNRs in this category include one produced for General Motors on auto technician jobs, one produced for AdSpace Networks on video displays in shopping malls, and two produced for Siemens. One Siemens VNR hyped future automobile dashboard options; the company provides electrical and mechanical components to auto manufacturers. The other VNR promoted ethanol as an alternative fuel for automobiles; Siemens also provides equipment to ethanol plants.

In addition to being fake news—and therefore bad reporting—VNRs on health issues pose potential dangers to unsuspecting viewers. This report documents two VNRs on prescription drugs, one on a laboratory test, and four others on over-the-counter health remedies or supplements.

The U.S. Food and Drug Administration (FDA) regulates promotional material from drug manufacturers that mentions a specific product, including VNRs. The FDA requires all such material to provide "fair balance," or information about drug risks as well as benefits; to be clear that the drug only treats certain conditions and not others; and to provide reporters with the full risk information for the drug. While the FDA cannot possibly review all the VNRs, direct-to-consumer ads and many other promotional materials put out by drug companies, in March 2003 the agency did issue a warning about "misrepresentations" in a drug company's press release on its new cancer treatment. In doing so, the FDA asserted its jurisdiction over promotional materials targeted to reporters.

It's important to note, however, that FDA jurisdiction ends at the newsroom door. That's good news for the three TV stations that aired a VNR produced for Stiefel Laboratories. Neither WCPO-9 in Cincinnati, OH, nor WSYR-9 in Syracuse, NY, nor WYTV-33 in Youngstown, OH, included any of the risk information from the VNR in their "report" on Stiefel's new prescription skin cream. In contrast, the two TV stations that aired a VNR produced for Pfizer on its new prescription insulin treatment did include some risk information, though the overall tone of both segments was promotional.

Another health-related VNR was produced for Quest Diagnostics, which provides laboratory tests and services. KABC-7 in Los Angeles, CA, aired a segment that was entirely derived from the Quest VNR. It encouraged parents with frequently sick children to have them tested for allergies and mentioned a specific blood test. That test is actually produced by Pharmacia Diagnostics, but Quest and Pharmacia have had a "national co-marketing initiative" for the test since at least 2003. The arrangement helps Pharmacia sell more tests, and helps Quest by "improving patient sales and driving growth," as Quest's CEO explained during a January 2005 conference call with investors.

How TV stations used two different VNRs promoting the same supplement from the same company further illustrates the confusion caused when complex medical issues are presented in a brief, corporate-sponsored format. One VNR, produced for the chemical company Bioibérica, was aired by WSYR-9 in East Syracuse, NY in a segment that claimed the company's supplement was effective in treating arthritis-related joint pain. The other Bioibérica VNR was aired by two stations, KYW-3 in Philadelphia, PA, and WFAA-8 in Dallas TX, in segments that questioned the supplement's effectiveness.

This report's findings on health-related VNRs are consistent with an academic study published in the American Journal of Managed Care in March 2006. Based on a review of the health segments aired by 122 local TV stations in one month, the study concluded, "Few newscasts provide useful information, and some stories with factually incorrect information and potentially dangerous advice were aired." The study also noted that "pervasive" health stories that aired in "more than 10 media markets" sometimes included "identical video."

That's not surprising. In 2004, more than 80 percent of TV stations were using the same number of or more health-related VNRs than they did in 2003, according to a survey by the major broadcast PR firm D S Simon Productions. The firm's chair commented, "Our medical stories are consistently generating more than 100 placements per project per year."