Watch our own Mary Bottari speak on Democracy NOW! about thousands of protesters that were being denied entry to the State Capitol yesterday despite a court order to open the building to the public.

In a dramatic turn of events at the Wisconsin State Capitol today, Governor Scott Walker defied a court order to open the Capitol for normal business operations. State legislator, Representative Marc Pocan, called the move "not only unprecedented, but contempt of court as well."

On Monday at 8:00 a.m., the Wisconsin Capitol building, which was the site of dozens of major protests in the last two weeks -- including one of over 100,00 on Sunday -- was virtually locked down as the Governor moved to limit protester access in advance of his scheduled budget address on Tuesday.

After untold numbers were turned away at the door Monday and told they could not speak to their legislators, Dane County Sheriff David Mahoney pulled his deputies from the Capitol saying it was not their job to act as "palace guard." Wisconsin has some of the strongest open meetings and open government laws in the nation, and the local sheriff's department had played a key role in allowing protesters to exercise their legal rights in a public space, while keeping the protests inside and outside the Capitol safe and incident-free.

The conservative American Recall Coalition, a group from Salt Lake City, Utah, is leading the charge to reel in eight Democratic Senators in Wisconsin who are among 14 lawmakers who left the state in protest of Governor Scott Walker's budget repair bill, according to the Wisconsin Government Accountability Board (GAB).

The out-of-state group last week filed with the GAB website to recall the Senators, but initial filings did not have anyone from the local senatorial district as part of the recall requests.

"They didn't have any local people involved, so we contacted them and said they need to have one local person in each district," said GAB spokesman Reid Magney. "They withdrew those initial filings and made new ones and we are waiting for the signed paperwork."

9:00 p.m. - Mary Bottari reports: Peg Lautenschlager, the former Attorney General of Wisconsin, announced Monday night on the Ed Schultz Show (MSNBC) that she had already filed a temporary restraining order (TRO) to keep the WI State Capitol open to citizens. The TRO was filed in response to the fact that citizens are having a more and more difficult time getting into the WI capitol building, as the Governor's office attempts to clear the building in advance of his 4:00 p.m. budget address on Tuesday.

Access to the capitol is protected by the Wisconsin Constitution and WI open records law when there is legislative business. Late tonight, Jonathan Rosenblum spotted committee hearing notices at the State Capitol with the following language at bottom:

A large, multi-union coalition gathered near the "Fighting" Bob LaFollette bust on the first floor of the East Gallery in the Wisconsin State Capitol this afternoon. Wearing gray T-shirts with the words "Wisconsin United for Worker's Rights" printed in red across an outline of the state, they sat down and started to sing, "We shall not be moved," just after the official building shut-down at 4 p.m.

"We know we have a right to peaceful protest," said Candice Owley, a Milwaukee nurse with the Wisconsin Federation of Nurses and Health Professionals. "We don't believe they should be removing us from the State Capitol."

Owley said those in her group planned to follow directions outlined by a grassroots group inside the capitol that has been preparing for today. The goal: to keep the protest peaceful, and allow those who wish to continue to keep vigil in protest of Governor Scott Walker's budget repair bill to remain in the building.

Cheesehead hats have never been so chic. The foam wedges could be spotted on the heads of people gathered in crowds throughout the U.S. yesterday, as protesters in all 50 states rallied in support of Wisconsin workers. The events were organized by MoveOn.org. Here's a brief roundup of some of the action from across the nation: 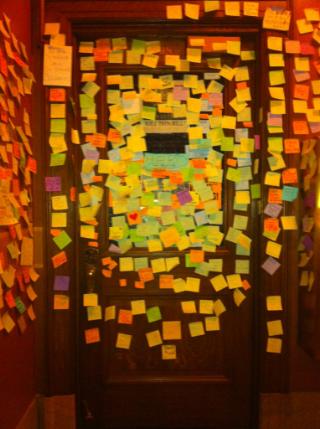 11:58 p.m. - Jonathan Rosenblum reports: According to unofficial count approximately 300 protesters are staying the night and a low profile contingent of law enforcement, some with "State Fair" patches on their shoulders. Less than two dozen visible.

10:51 p.m. - Jonathan Rosenblum sends this photo of Representative Brett Husley's office door papered with post-its from unions, students and regular citizens thanking him for staying around the Capitol to oppose SB 11. He and Representaive Kelda Roys were present through the announcement around 7:00 p.m. tonight that protesters of the bill would not be expelled from the Capitol.

8:48 p.m. - Jonathan Rosenblum reports that he is in line for official occupation manna (more pizza) with Andrew Rohn and Cat Capellaro who wrote the musicals Temp Slave and Walmartopia. They say they have contributed the following chant to the rotunda: "Unions make Wisconsin better. This revolution is fueled by cheddar.

They may look more Slayer than healer, but the hand-printed medic logo safety-pinned to their sweatshirts suggest otherwise. The street medics, a loose organization of volunteer healthcare providers tied together by a shared ethic of collaborative service, have helped keep the Madison protests healthy and safe.

Embattled Wisconsin Governor Scott Walker came under fire today after news broke about statements he made in a 20-minute phone call from a Buffalo-area alternative news reporter, Ian Murphy of the Daily Beast, posing as David Koch, a billionaire whose corporate PAC directly supported Walker and who has given millions to groups that have run ads to aid Walker's rise to the state's highest office. (Listen to the call here.)

As the Center for Media and Democracy has reported, the Koch PAC not only spent $43,000 directly on Walker's race, but Koch personally donated $1 million to the Republican Governors Association which spent $5 million in the state. Besides the Governor, the Koch brothers have other "vested interests" in the state.

Tim Fernholz wrote an excellent article in the National Journal about the "bait and switch" of Governor Walker's Wisconsin plan. Fernholz points out that the short-term deficit problem can be covered by debt restructuring, and that the big pieces of the bill that relate to dismantling public sector unions, control over Medicaid and creating a no-bid energy asset sale process are not directly budget related. (See Bait and Switch?).

There's a three-prong approach in Governor Walker's plan that highlights a blueprint for conservative governorship after the 2010 election. The first is breaking public sector unions and public sector workers generally. The second is streamlining benefits away from legislative authority, especially for health care and in fighting the Health Care Reform Act. The third is the selling of public assets to private interests under firesale and crony capitalist situations.