In its latest quarterly financial report to the U.S.

Medialink Worldwide -- the largest producer of fake news products such as video news releases (VNRs) -- is in financial meltdown.

How can you counter "daily stories and blog entries that portray the negative aspects of joining the military"? That was PR firm Weber Shandwick's job in the lead-up to the U.S. Army All-American Bowl in January 2008. 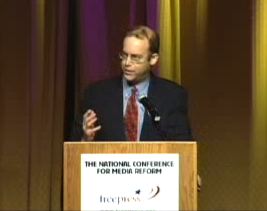 As Paul Schmelzer wrote on the Minnesota Independent website, "There were two National Conferences on Media Reform in Minneapolis over the weekend: the one I attended and the one Bill O'Reilly, Juan Williams and Fox News talking head Mary Catherine Ham didn't."

O'Reilly's show tried to manufacture controversy about the conference, which I and others from the Center for Media and Democracy attended. But before addressing that, how about some real news on a genuinely controversial issue?

During Sunday's closing plenary, FCC Commissioner and fake news foe Jonathan Adelstein pledged to push for multiple thorough investigations of the Pentagon military analyst program. So far, the Pentagon's Inspector General and the Government Accountability Office (GAO), the investigative arm of Congress, have launched inquiries into the Defense Department's secret cultivation of military pundits. But those investigations aren't enough.

As we have reported previously, Medialink Worldwide -- the largest producer of fake news products such as video news releases (VNRs) and audio news releases (ANRs) -- has fallen out of favor

We recently received an email from someone who asked, "What is the difference between a 'product placement' and a 'video news release' (VNR)? Is a VNR a type of product placement?" Since other people might have the same question, I thought I'd post my answer here. On SourceWatch, we have articles about both topics. As our article about video news releases explains, a VNR is a piece of video that is created (typically by a public relations firm on behalf of a paying client) and designed to look like a news segment for broadcast by TV news programs. It deceives audiences by creating the impression that the "news" they see on TV was produced by independent reporters, when in fact VNRs are promotional pieces designed to sell something for a client whose identity is not always disclosed. TV news shows often deny that they use VNRs, but Diane Farsetta, our senior researcher, has done extensive research in which she found numerous examples of the practice. "Product placement" is a separate but similarly sneaky practice of getting television programs and movies to display a company's product within their program.

The giant of the fake news business, Medialink Worldwide, has fallen out of favor with investors. In the last year the company's share price has plummeted from $5.81 to its current level around the $1.70 mark. In its latest annual report, the company glumly states that sales in 2007 in the U.S.