As the first half of 2011 has revealed, Wisconsin is not a moderate "purple" state, but a state divided between staunchly "blue" progressives and righteous "red" right-wingers. That rift is particularly apparent in legislative conflicts over the criminal justice system, a debate spurred by corporate interests represented in the American Legislative Exchange Council (ALEC) and perpetuated by ALEC legislative members, including Wisconsin Governor Scott Walker.

Wisconsin's history and public policy reflects the red/blue divide. It is the state that gave birth to the Republican Party, which supported slavery abolition, and the John Birch Society, which opposed the civil rights movement. In the first half of the 20th Century, the state elected both progressive hero Robert "Fighting Bob" LaFollette and right-wing extremist Joe McCarthy. It is the state that elected both former Senator Russ Feingold (D) and Representative Paul Ryan (R).

Wisconsin also produced Paul Weyrich, who in 1973 co-founded both the Heritage Foundation and ALEC (and in subsequent years, Free Congress and Moral Majority). Weyrich's ALEC, it seems, has been a factory for many of the state's most recent right-wing policy initiatives.

Tom Ridge, on the Thursday, June 9 edition of the Colbert Report, claimed he is "not a lobbyist." A quick glance at his resume shows that nothing could be further from the truth.

Among them: first-ever head of the Department of Homeland Security (DHS) under the Bush Administration from 2003-2005, former Governor of Pennsylvania from 1995-2001, and former Republican member of the U.S. House of Representatives from from 1983-1995.

Harold Camping poured millions of dollars into his global PR campaign to convince people around the world that Earth as we know it would end on Saturday, May 21. Some believers who took his prediction to heart gave up their homes, their jobs and liquidated their worldly assets to buy more advertising to advance his message. But the biggest sacrifice that occurred as a result of Camping's prediction is a 14 year old girl from Russia who reportedly hanged herself to avoid being left behind with the nonbelievers Camping claimed would suffer on Earth after the rapture. The Christian Post reported that in the days leading up to May 21, Nastya Zachinova of Central Russia's Republic of Mari El wrote entries in her personal diary that revealed she was terrified of the suffering Camping predicted would come, and that she didn't believe she was one of the "righteous" who would rise up to heaven and be saved. On Monday, May 23 -- two days after the world failed to end as he predicted -- Camping faced the media and gave a statement acknowledging his "error." After he was finished speaking, a reporter informed Camping that a mother who had believed his prediction had attempted to kill herself and her two children, but did not succeed. Camping said he was relieved she did not succeed. But when a reporter pressed Camping about whether he would accept any responsibility for the mother's attempt, Camping answered he would not. "I don't have any responsibility. I can't take responsibility for anybody's life. I'm only teaching the Bible," Camping responded. Presumably he accepts no responsibility for Nastya Zachinova's death, either.

Gasland, a documentary film that exposes the dangers accompanying methane gas drilling in the Marcellus Shale region, has been mercilessly attacked by Big Oil since the film was released during the summer of 2010. The attacks have only escalated both in intensity and volume as the film has grown in popularity and acclaim, reaching their peak when it was announced that the film was a candidate for Best Documentary at the 2011 Academy Awards.

While most of the spin has centered around factual misinformation about fracking, utilizing the prototypical Big Oil, Big Lies playbook tactic, Big Oil has now raised the stakes. In lieu of lying about how "environmentally friendly" the fracking process is, they have shifted to the propagandist's last resort: shooting the messenger.

MADISON--Citizens from across Wisconsin have been calling the Center for Media and Democracy to complain about robo-calls they received pushing Scott Walker's agenda against public workers. The robo-calls have been bought and paid for by a shadowy Washington, DC-based group that calls itself the "League of American Voters" (LAV). 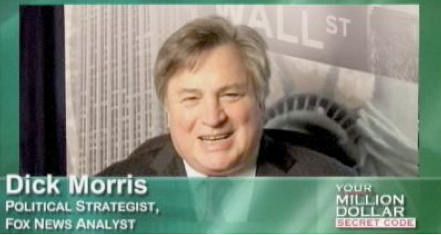 As the Center has reported previously, LAV has one employee, a failed politician from West Virginian named Bob Adams, and is the pet project of FOX "analyst" Dick Morris, a pollster who was fired in disgrace in 1996 for conducting phone calls with the President while conducting business with a prostitute serving his foot fetish at DC's Mayflower Hotel. After Morris' falling out with Democrats in the aftermath of the scandal, he became a frequent talking head on FOX and a serial author of books bashing Democrats. The latest book he is pushing is one that praises the reactionary positions of some of the politicians elected last year, like Walker: "Revolt! How the Governors Are Changing American Politics ... Permanently." His pulp pieces are peddled on LAV's website as rewards for donations.

Chances are you've never heard of Peter Shumlin, who last month was sworn in as the 81st governor or Vermont. That's about to change.

On February 11, 2011, after 30 years of dictatorship, Egyptian president Hosni Mubarak announced he was stepping down. As ancient pharaohs slumbered inside, a crowd of over a million surrounded the rose-colored Cairo Museum setting off fireworks and jumping for joy as they peacefully forced a modern pharaoh to flee. This hopeful moment will be studied for years, and no topic will be more hotly debated than the role of social media in the uprising.

As former President Ronald Reagan's hundredth birthday approaches, Republicans continue to mythologize his political successes. Conservatives like to portray Reagan as the man who brought down the Berlin Wall, cut taxes and saved the economy. But when Reagan negotiated with Soviet leader Mikhail Gorbachev over nuclear arms, many Republicans at the time felt he was wrong for his willingness to negotiate with an evil dictator. Many people forget that Reagan was divisive for the country and won almost no support among African-Americans. Conservatives also fail to acknowledge that Reagan raised taxes throughout his presidency, including one tax hike that at the time was the biggest in American history. Reagan's legacy is one of unprecedented federal budget deficits fueled by tax cuts made at the same time the federal budget grew due to massive increases in military spending. Reagan also willingly worked with Democrats on major policy issues, like Social Security. Praise for his economic policies is inflated, according to Lou Cannon, author of several books on Reagan. Cannon points out that the domestic accomplishment most attributed to Reagan -- ending runaway inflation in the late 1970s -- occurred not as a result of  the "supply side" economics that conservatives embrace as part of Reagan's legacy, but because Federal Reserve Chairman Paul Volcker drastically tightened interest rates at the time.

Back in July, 2010 PRWatch noted the U.S. Environmental Protection Agency's ignorance about the potential for ecological damage from BP dumping millions of gallons of oil dispersants into the Gulf to try to limit damage from the BP Deepwater Horizon blowout. Yesterday, scientists released a report that re-confirmed the EPA's voluntary ignorance.