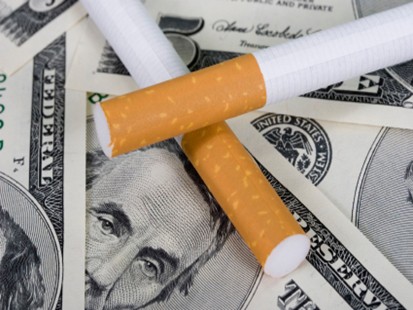 Last spring, President Obama signed a bill into law that raised the tax on roll-your-own cigarette tobacco from $1.10 per pound to a whopping $24.78 per pound. The revenue from the tax was to be put towards expanding children’s health insurance programs. But tobacco companies have found a way to sidestep the new tax: they have started re-labeling the same product as pipe tobacco, which is taxed at only $2.83 a pound. As a result, the market for roll-your-own tobacco has exploded, quintupling in just five months. Exploiting the tax loophole this way also lets tobacco companies thumb their nose at the new U.S. Food and Drug Administration's tobacco regulations by continuing to sell sweet and fruity-flavored tobaccos, which are banned under the new rules because they are attractive to youngsters. Tobacco companies are saying they've merely found a way to save themselves from a prohibitively high tax that would force them out of business.

SECOND HAND SMOKE IS A JOKE. Ask the anti-tobacco folks to tell you what truly is in second hand smoke...when it burns from the coal its oxygenated and everything is burned and turned into water vapor..................thats right water..........you ever burned leaves in the fall...know how the heavy smoke bellows off.......thats the organic material releasing the moisture in the leaves the greener the leaves/organic material the more smoke thats made......thats why second hand smoke is classified as a class 3 irritant by osha and epa as of 2006........after that time EPA decided to change the listing of shs as a carcinogen for political reasons.......because it contained a trace amount of 6 chemicals so small even sophisticated scientific equipment can hardly detect it ........they didnt however use the normal dose makes the poison computation when they made this political decision. However osha still maintains shs/ets as an irritant only and maintains the dose makes the poison position.......as osha is in charge of indoor air quality its decisions are based on science not political agendas as epa's is. We can see this is true after a federal judge threw out the epa's study on shs as junk science......... Wednesday, March 12, 2008 British Medical Journal & WHO conclude secondhand smoke "health hazard" claims are greatly exaggerated The BMJ published report at:

concludes that "The results do not support a causal relation between environmental tobacco smoke and tobacco related mortality. The association between exposure to environmental tobacco smoke and coronary heart disease and lung cancer are considerably weaker than generally believed." What makes this study so significant is that it took place over a 39 year period, and studied the results of non-smokers who lived with smokers.....

meaning these non-smokers were exposed to secondhand smoke up to 24 hours per day; 365 days per year for 39 years. And there was still no relation between environmental tobacco smoke and tobacco related mortality. In light of the damage to business, jobs, and the economy from smoking bans the BMJ report should be revisited by lawmakers as a reference tool and justification to repeal the now unnecessary and very damaging smoking ban laws. Also significant is the World Health Organization (WHO) study:

Passive smoking doesn't cause cancer-official By Victoria Macdonald, Health Correspondent " The results are consistent with their being no additional risk for a person living or working with a smoker and could be consistent with passive smoke having a protective effect against lung cancer. The summary, seen by The Telegraph, also states: 'There was no association between lung cancer risk and ETS exposure during childhood.' " And if lawmakers need additional real world data to further highlight the need to eliminate these onerous and arbitrary laws, air quality testing by Johns Hopkins University proves that secondhand smoke is up to 25,000 times SAFER than occupational (OSHA) workplace regulations.

The Chemistry of Secondary Smoke About 94% of secondary smoke is composed of water vapor and ordinary air with a slight excess of carbon dioxide. Another 3 % is carbon monoxide. The last 3 % contains the rest of the 4,000 or so chemicals supposedly to be found in smoke… but found, obviously, in very small quantities if at all.This is because most of the assumed chemicals have never actually been found in secondhand smoke. (1989 Report of the Surgeon General p. 80). Most of these chemicals can only be found in quantities measured in nanograms, picograms and femtograms. Many cannot even be detected in these amounts: their presence is simply theorized rather than measured. To bring those quantities into a real world perspective, take a saltshaker and shake out a few grains of salt. A single grain of that salt will weigh in the ballpark of 100 million picograms! (Allen Blackman. Chemistry Magazine 10/08/01). - (Excerpted from "Dissecting Antismokers' Brains" with permission of the author.)

The Myth of the Smoking Ban ‘Miracle’ Restrictions on smoking around the world are claimed to have had a dramatic effect on heart attack rates. It's not true. http://www.spiked-online.com/index.php/site/article/7451/

As for secondhand smoke in the air, OSHA has stated outright that: "Field studies of environmental tobacco smoke indicate that under normal conditions, the components in tobacco smoke are diluted below existing Permissible Exposure Levels (PELS.) as referenced in the Air Contaminant Standard (29 CFR 1910.1000)...It would be very rare to find a workplace with so much smoking that any individual PEL would be exceeded." -Letter From Greg Watchman, Acting Sec'y, OSHA, To Leroy J Pletten, PHD, July 8, 1997
-harleyrider1978

The American people are not as stupid as many assume. There will always be ways around what anti's want to make unaffordable. The campaign to denormalize smokers in my opinion has been a disaster. Now that the money from tobacco has been exhausted they are moving on to the obese. Where will it end?

The excessive SCHIP taxation will not generate the revenue to expand the SCHIP program. The federal government has taken a sizable bite out of the states tobacco excise tax revenue. In the high tax states, most retailers have given up trying to sell roll your own tobacco. Then the FDA took control of cigarettes and banned the flavored ones from the market. The states had a steady flow of revenue from the sale of these products. The black market wil flurish while legal retailers and the states will flounder. John Q. Public will always out smart the revenuers and look out for his own wallet.

The states will not be able to expand SCHIP, they will be lucky if they maintain the existing programs on an ever declining revenue source. Has any SCHIP funding been released to the states yet?

This time, the Golden Goose will not keep flying.

Shouldn't this story read Obama's Tax increase upon those earning below $200,000 through massive tobacco taxes is meeting resistance? You bet it is! I am growing my own!

The media is bought off by the pharma company that sells nicotine replacement products and who finance the pro ban movement. Their ads and the resulting bias are a sad commentary on the media. It is unfortunate that we cannot get the truth from the MEDIA in this DEMOCRACY! How many pieces of silver does it take to throw your neighborhood business under a bus?

For every bad deed shown by media and criticize by media is a part of their duty that assigned by the general public and they are just doing their duty, why we blamed everything that goes bad or not in the favor of us we put on media. Not good

Is the Anti-Tobacco crowd really so desperate that they would claim that pipe tobacco, which has been flavored for 500 years is something newly created specifically to entice juveniles to smoke? Clearly, they are.
Whats worse is the majority of simpletons (in Washington) that actually believe this crap.

The perception of collusion between Non-profit organizations, Public Health agencies, Pharmaceutical companies, and paid professional lobbyist can not be easily dismissed. Except of course, by the media,
The ever oblivious media. There are no reporters left in the world that seek the truth, they only seek pulitzers, the truth no longer matters,

We can only hope that the evidence of fraud will eventually be brought to light and result in lenghty prison sentences for the treasonous promoters of such liberty killing legislation.