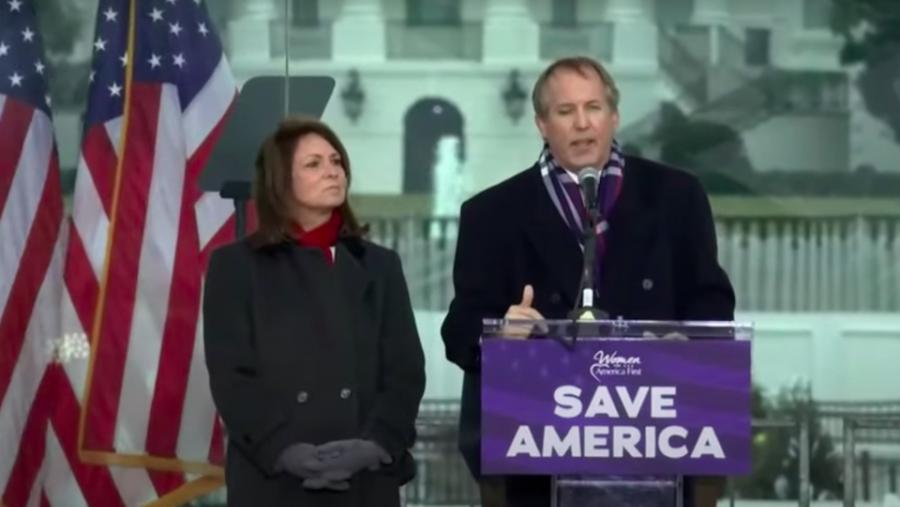 By David Armiak and Alex Kotch

The Republican Attorneys General Association (RAGA) is trying desperately to distance itself from the attempted coup by white supremacists and Trump supporters on Jan. 6, but it cannot hide from the fact that its actions helped fuel the violence that left at least five dead, many more injured, and the Capitol badly damaged.

RAGA was a member of the "March to Save America" coalition that organized the Jan. 6 rally in D.C. to overturn the presidential election results. Its former chair, Texas Attorney General Ken Paxton, spoke at the rally alongside President Trump. And its dark money partner, the Rule of Law Defense Fund (RLDF), ran robocalls ahead of time explicitly urging protesters to march on the U.S. Capitol.

It's no surprise then that few are putting much credence in RAGA's statement condemning "the violence, destruction, and rampant lawlessness" of the pro-Trump mob or its claim that it had nothing to do with the day's treasonous events.

RAGA is a registered political organization that accepts unlimited contributions from corporations and special interest groups such as Koch Industries and the National Rifle Association. Along with its 501(c)(4) affiliate, RLDF, RAGA runs acash-for-influence operation that coordinates the activities of Republican state attorneys general and sells access to those AGs and their staff to its corporate funders.

RAGA was listed as a "coalition partner" on the March to Save America website until early on the morning of Jan. 3, after which someone replaced it with RLDF as "participating" in the effort, according to a tweet by the Democratic Attorneys General Association.

The tweet followed a Jan. 7 report by the watchdog group Documented that RLDF sent out a robocall to an unknown group of recipients calling on them to attend the rally and march on the Capitol.

"We will march to the Capitol building and call on congress to stop the steal," and "[w]e are hoping patriots like you will join us," the message said.

RAGA's leaders claim to have no knowledge of the robocall or its participation in the March to Save America rally, but have yet to provide an explanation of who approved and paid for the calls if they did not. Ohio AG Dave Yost (R) pinned it on a "rogue staffer," but the group has provided no further information.

#StoptheSteal is an astroturfed effort led by Ali Alexander (aka Ali Akbar) with deep ties to the Council for National Policy that was formed shortly after the presidential election to promote misinformation on voter fraud and to pressure state election officials to overturn election counts that favored president-elect Joe Biden.

At the rally, Paxton, a co-chair of Lawyers for Trump, told the crowd, "We will not quit fighting."

On Thursday, Paxton advanced a debunked conspiracy theory on Facebook consistent with Alexander and other #StoptheSteal organizers that "those who stormed the capitol yesterday were not Trump supporters. They have been confirmed to be Antifa."

This unfounded allegation is in line with RAGA's dishonest "Lawless Liberals" campaign, which it ran for much of 2020, exaggerating instances of property destruction associated with Black Lives Matter protests in response to the police killing of unarmed Black man George Floyd. The attorneys general manipulated a mostly peaceful movement to attack Democratic attorney general incumbents and candidates and support Trump.

An Oct. 7 RAGA press release claimed Kamala Harris was "unfit to hold the office of Vice President" because she "wants mobs, not jobs."

"Throughout its video series, RAGA has repeatedly warned that the violence being perpetrated by Democrats would continue even after the Presidential Election," RAGA claimed in an ironic Nov. 18 press release.

The group's ads used alarmist language and images to inflame the public around its claims that Democrats would "radically change America," redistribute wealth, “cancel free thinking,” and impose socialism.

Since the election, state Republican attorneys general worked on the taxpayers' dime to overturn the election for Trump and promote his baseless claims of widespread voter fraud.

Paxton, who is currently under FBI investigation for abuse of office and has been indicted on felony securities fraud charges, led a last-ditch legal effort in December, joined by 17 Republican AGs, to overturn the election results and nullify more than ten million voters. The lawsuit was summarily rejected by the U.S. Supreme Court.

Utah Attorney General Sean Reyes, a former RLDF chair who took a leave of absence to assist Trump in overturning Biden's win, faced condemnation from his home-state Republican governor and lieutenant governor for signing on to Paxton's lawsuit, getting involved in other states' elections, and not consulting them beforehand.

RAGA appears to pay RLDF's payroll, costs that RLDF at least partially reimburses RAGA for, according to federal tax records.

The Center for Media and Democracy has filed lawsuits against Reyes and Yost for refusing to turn over public records surrounding their communications with RAGA and RLDF. Both actions are still pending.

The U.S. Chamber of Commerce is the second-biggest donor, having given $1.25 million over the last two years through its affiliated Institute for Legal Reform.