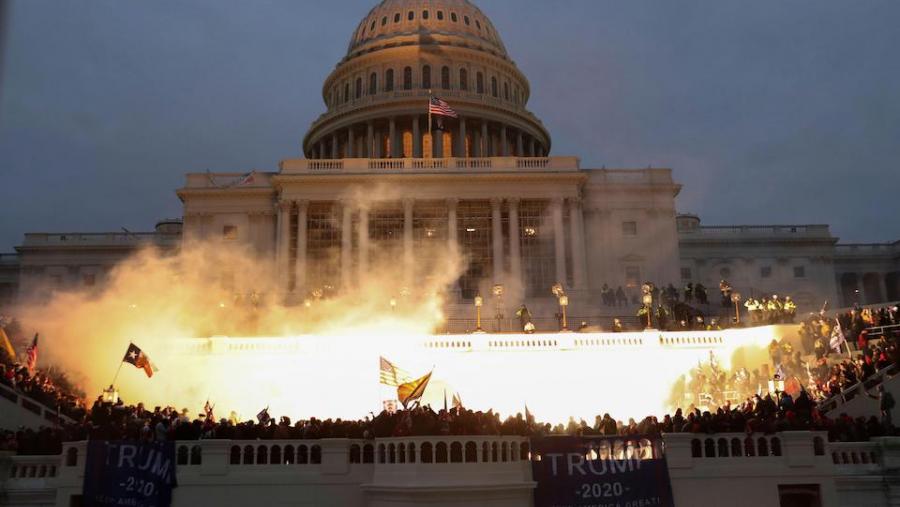 The astroturfed #StoptheSteal group that drew thousands of Trumpists to the Washington, D.C. rally on Wednesday that turned into a violent insurrection at the Capitol has strong ties with the influential Christian Right Council for National Policy.

The rally, like many other #StoptheSteal events held since the election of Joe Biden, gathered right-wing extremists who believe the lies spread by Trump and complicit politicians that the election was fraudulent in order to demand that Congress ignore its obligation to certify the Electoral College votes and overturn the election.

At least five members and leaders of the Council for National Policy (CNP) worked to turn out MAGA extremists and were scheduled to speak at the rally after Trump exhorted the crowd to march on the Capitol.

CNP is a secretive, influential "charity" composed of right-wing donors and Christian Right movement leaders and activists with deep ties to the Trump administration.

Mitchell, a CNP Board of Governors member, lost her job at Foley & Lardner after the Washington Post published a recording of a Jan. 2 phone call in which she joined Trump in pressuring Georgia's secretary of state to "find" enough votes to declare Trump the winner in Georgia.

CNP "Action Steps"distributed from that panel and provided to CMD by investigative reporter Brent Allpress asked members to call on state and federal lawmakers to challenge the election results and appoint alternate slates of Trump electors to the Electoral College.

In November, CMD exposed that former CNP member and right-wing influencer Ali Alexander (aka Ali Akbar), was the driving force behind #StoptheSteal. Alexander organized turnout and spoke at the rally in D.C. alongside many of the same individuals who helped lead the earlier protests.

Alexander told reporters in advance of the Jan. 6 rally that he had more than 100 buses and 30,000 cars brining protesters from across the country.

After the assault on Congress, Alexander made a statement that has since been removed by Twitter, in which he pointed to the rally on the Mall and said, "I don't disvow this. I do not denounce this," and attempted to distance himself from the violence at the Capitol, but then called stopthesteal.us the "home of the rebellion." In another tweet, Alexander wrote, “Antifa Agitation!” to deflect blame for the riot.

Turning Point USA's founder and president Charlie Kirk, a CNP member who continues to spread misinformation of voter fraud and was listed as an organizer of the November #StoptheSteal rally in November, was also deeply involved in organizing the D.C. protest-turned-riot. Kirk, who also chairs Students for Trump, touted on Twitter that he was sending "80+ buses full of patriots to DC to fight for this president."

The right-wing Veterans in Defense of Liberty (VIDOL), led by CNP member Scott Magill, also sent troops to the insurrectionist #StoptheSteal event Wednesday. A January 3 email to "fellow Warriors and Friends," stated that in response to Trump's "clarion call," VIDOL would attend the January 6 protest, and "our battle cry shall be, 'We will not concede!'"

In a 2017 CNP member report leaked to CMD by Allpress, Magill claimed to have a "cavalry of Veteran motorcycle riders" for "deployment to anti-American protests, flag burning ceremonies, snowflakes rallies, etc., etc.," and argued that "we are in an undeclared civil war."

Ed Martin, president of the Phyllis Schlafly Eagles and a CNP member, has been involved in the organizing of #StoptheSteal from the get-go and was listed as a speaker, as was John Schlafly, son of right-wing activist and former member of CNP Phyllis Schlafly.

Anti-abortion activist Jason Jones, a CNP member, was also scheduled to speak, as were many of Alexander's organizing partners in #StoptheSteal including Arizona Representative Paul Gosar, who led the House challenge to his state's electors.

Trump embraced and promoted the #StoptheSteal rally, tweeting on Dec. 19, "Statistically impossible to have lost the 2020 Election. Big protest in D.C. on January 6th. Be there, will be wild!" Then, on Jan. 2, Trump tweeted, "The BIG Protest Rally in Washington, D.C., will take place at 11.00 A.M. on January 6th. Locational details to follow. StopTheSteal!"

The BIG Protest Rally in Washington, D.C., will take place at 11.00 A.M. on January 6th. Locational details to follow. StopTheSteal!

Alexander told supporters on Parler to prepare to occupy and, "encouraged people to bring tents and sleeping bags and avoid wearing masks for the event. 'If D.C. escalates… so do we,'" PBS reported.

After the MAGA supporters breached the Capitol during the certification proceedings, forcing the evacuation of the Vice President, Representatives, Senators, staff, and reporters, Trump was slow to comment. When he did release a videoasking rioters to "go home in peace," he still claimed the election was "stolen from us," expressing love for his supporters, and calling them "very special."

Trump and Pence have spoken at CNP meetings over the last year where they both thanked the group for its efforts. Pence thanked CNP's president Bill Walton and CNP for "consistently amplifying the agenda of President Trump and our Administration" in a March 2020 letter leaked by Allpress.