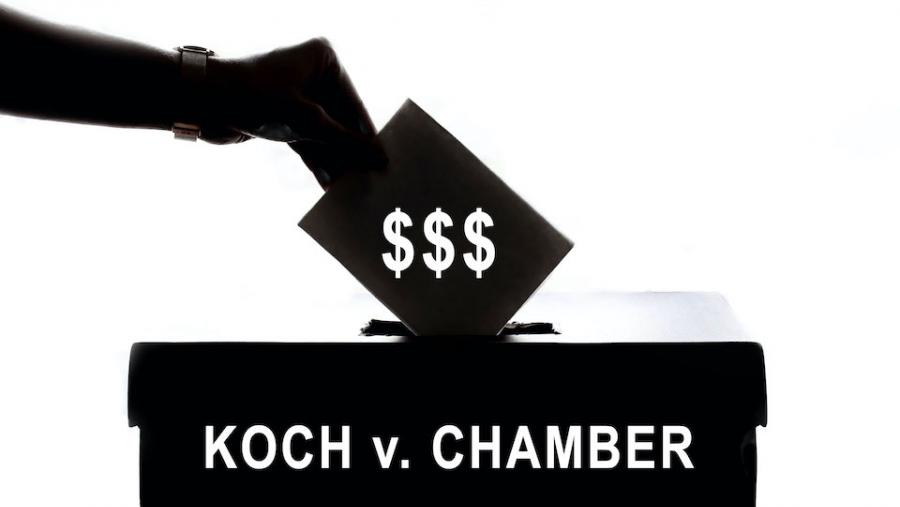 In endorsing Democratic House incumbents this election, the U.S. Chamber of Commerce found itself at odds with Charles Koch's PAC and Americans for Prosperity, his astro-turf political operation. The move pitted the largest and oldest mainstream business group – the Chamber was founded in 1912 – against the most powerful of right-wing networks.

As Koch Industries is a financial backer of the Chamber, it also meant that Charles Koch sometimes was opposing himself.

The Chamber of Commerce endorsed or contributed to 53 incumbent Democrats this year, an unprecedented move. The Koch network was on the GOP side in ten of those races, all involving freshman Democrats up for reelection in what were marginally Republican districts.

In those ten races, Koch's groups spent $2.8 million, as compared to $28,000 contributed by the Chamber. Four of these first-term Democrats lost their reelection bids, largely because of a higher GOP turnout in 2020 than in the 2018 midterm elections. Five of the first term Democrats won reelection, with one race still to be determined.

Historically the Chamber only ranked legislators on floor votes on major issues, but they are now also looking at Chamber-backed bills that don’t come up for a vote and Democrats who co-sponsor bills introduced by Republicans, according to the Nevada Current.

The endorsed House Democratic incumbents all scored over 70 percent on the Chamber's voting scorecard, which includes tax, trade, immigration, and other issues.

The Chamber's endorsement of Democratic incumbents angered many right-wing Republicans. "House Minority Leader Kevin McCarthy said in a Fox News interview he no longer wanted to be endorsed by the business group, accusing its officials of having 'sold out,'" the Iowa Capital Dispatch reported.

Newt Gingrich, former Republican Speaker of the House, tweeted that, "Endorsing 23 House Democrats who vote for Pelosi betrays every business member of the Chamber. The leadership [of the group] should be replaced."

When the Chamber announced its endorsements, "President Trump reportedly asked U.S. Chamber of Commerce CEO Tom Donohue if the group's endorsements of Democratic lawmakers were a 'done deal,'" The Hill reported.

Koch Industries has been an active member in the U.S. Chamber and its state affiliates, including Kansas, where Koch Industries is domiciled, and Georgia, headquarters of Koch's subsidiary Georgia-Pacific.

The Koch political network gave the U.S. Chamber over $5.5 million just between 2012 and 2014, and helped spearhead the Chamber's Institute for Legal Reform, an effort to make it more difficult for people to sue for bad acts and bad products.

The U.S. Chamber of Commerce and its hundreds of state and local affiliates are political powerhouses, with the U.S. Chamber alone spending $59 million on lobbying this year and $77 million last year, making it the highest spender on direct lobbying at the national level.

In 2019, the year of its latest tax filing, the budget of Koch's Americans for Prosperity (AFP) was $54.5 million, and this year its super PAC, AFP Action, raised almost $50 million, spending most of it on digital attack ads, mail, and door-to-door canvassing.

Two of the ten congressional races where the Chamber and Koch faced off were in Iowa. AFP attacked two incumbent Iowa Democratic representatives backed by the Chamber, Cindy Axne and Abby Finkenauer, for their support of the Export-Import Bank, a pet target of Charles Koch.

The Ex-Im Bank is used to provide credit and loans for U.S. companies that have export opportunities. In 2018 through 2020 the Chamber and other business groups worked to make support of the Ex-Im Bank a bipartisan issue.

While it is likely that few of AFP's claimed three million "members" have given the issue much thought, Charles Koch wants to eliminate the Ex-Im Bank because it subsidizes U.S. exporters.

In criticizing the Democrats, AFP said, "Ex-Im perpetuates the culture of cronyism and fraud that puts special interests ahead of hard-working Americans. Those members who voted in favor of financing risky taxpayer-backed loans for politically connected big businesses and wealthy foreign state-owned firms will be held accountable."

Koch, however, only opposes government subsidies his companies do not get. Good Jobs First estimates that Koch and its subsidiaries have received more than $460 million in known tax subsidies since 1990, with the amount of many other tax breaks undisclosed.

On the other hand, the Chamber, representing hundreds of businesses, says the Ex-Im Bank "is one of the most important tools at the disposal of U.S. companies to increase exports and create jobs. The benefits of its programs to the U.S. economy are plain: In fiscal year 2013, Ex-Im provided financing or guarantees for $37.4 billion in U.S. exports, thereby supporting more than 200,000 American jobs."

Iowa exports its agricultural and other products all over the world, and the reelection campaigns for the two Iowa freshmen became ground zero for the fight between the business group and Charles Koch.

AFP Action ran ads against Axne and in support of the losing Republican, David Young, while the U.S. Chamber supported Axne. Axne got 49 percent of the vote; Young got 47.6 percent.

AFP Action spent more than $73,000 on Young, promoting him through mail, digital advertising, and door-to-door canvassing. For her part, Axne plastered the Chamber's endorsement all over her literature, talked about it on her social media, and used it when she made a point of visiting local chambers of commerce.

In the other Iowa race, the Koch operation went all in for Young. AFP Action spent $127,790 to oppose Abby Finkenauer with ads and endorsed her opponent, Ashley Hinson, and spent $391,595 on independent expenditures on her behalf. One full page ad screamed, "Abby Finkenauer voted to extend a failed agency."

Charles Koch's conglomerate, Koch Industries, also has a PAC – KochPAC – which gives money raised from employees, and it is no surprise that often the money is given to many of the same candidates AFP supports. KochPAC donated $10,000 to Hinson, while the Chamber endorsed Finkenauer and gave her $1,000.

In Fresno, California, David Valadoa, a Republican who was replaced in 2018 by Democrat TJ Cox, received $10,000 from KochPAC for a rematch, which ended with Valadoa beating Cox 50.6 percent to 49.4 percent. The Chamber, again on the other side, endorsed TJ Cox and gave him $2,500.

In Virginia, KochPAC gave $5,000 to Republican Nick Freitas, and AFP Action spent a whopping $652,000 in independent expenditures in his race against freshman Democrat Abigail Spanberger. Of the money spent, $200,000 went for direct mail and the rest for social media and door-to-door canvassing.

The Chamber endorsed Spanberger, donated $5,000 to her campaign, and gave her its new award for legislators who display an interest in bipartisanship. Freitas lost the race with 49.1 percent of the vote to Spanberger's 50.9 percent.

Arn Pearson and Ezra Sassaman contributed to this report.