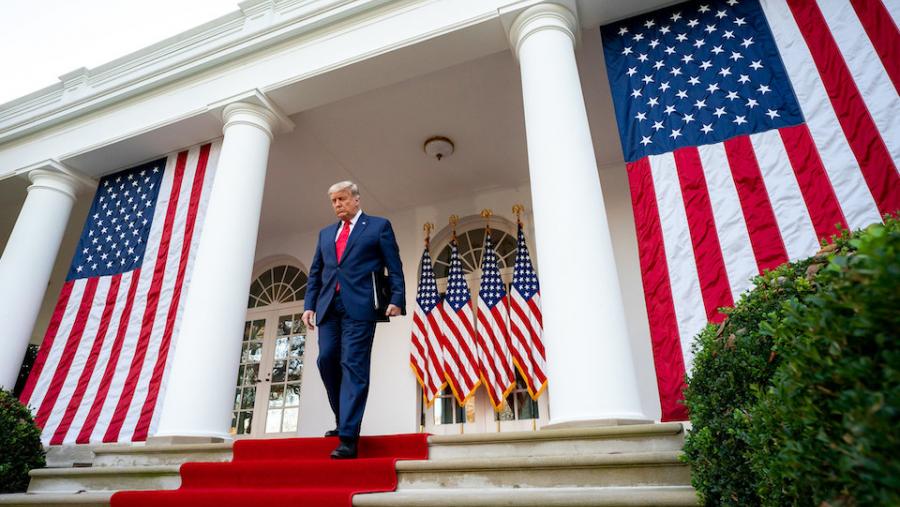 Over 1,200 prominent lawyers from across the country have signed an open letter calling for an end to baseless claims that by the Trump campaign that the 2020 presidential election was fraudulent as part of Trump's desperate attempt to overturn the decisive vote of the American people.

The letter, organized by the nonpartisan Lawyers Defending American Democracy, also calls on courts to hold the lawyers making the false claims accountable to the oath they swear to uphold the Constitution and honestly discharge their duties.

"A lawyer's oath is a sacred vow," the letter states. "Americans have a right to expect, and courts must require, that those who undermine the Constitution by perpetuating false allegations to prevent citizens from having their vote counted – effectively denying them the right to vote – be held to account."

The Center for Media and Democracy's President, Lisa Graves, and Executive Director, Arn Pearson, joined with attorneys from "all regions of America, representing a myriad of political and ideological backgrounds" to sign on to the letter.

"It is still shocking to witness so many of Trump's lawyers misleading the courts and their fellow Americans with demonstrably false claims of widespread voter fraud," Graves said. "And it is wrong, morally as well as under the ethical rules that govern the legal profession. To engage in such lies, which have been used to raise millions to enrich Trump's legal team and campaign, while attempting to subvert the legitimacy and the results of this election is reprehensible."

"Knowingly making false claims in court submissions as part of a scheme to delay vote certifications and enable GOP-controlled legislatures to seat pro-Trump electors against the will of the voters is profoundly unethical and poses a direct threat to our democracy," Pearson said.

"Every candidate has a right to ensure that an election is conducted lawfully. However, court challenges, if any, must be based on facts, on evidence. These principles are fundamental to securing every citizen's right to vote and to our democracy," the letter states.

"If ever there were a time for the nation's bar associations to speak out for the rule of law, it is now," writes Lauren Stiller Rikleen in The National Law Journal. "This is neither about politics nor partisanship. It is about the ability to keep our republic, as Benjamin Franklin challenged following the Constitutional Convention of 1787."

The full letter is available here with signatures and below.

We, the undersigned, are attorneys from all regions of America, representing a myriad of political and ideological backgrounds. We join in this letter to demand that public office holders and lawyers uphold their oath to defend the Constitution. To do that, they must cease making false or unfounded claims and implementing actions – including those actions taken by Attorney General William Barr on November 9 – that undermine our presidential election process.

The right to a fair and free election is sacred in this country. As the Supreme Court has written: "The right to vote freely for the candidate of one's choice is of the essence of a democratic society, and any restriction on that right strikes at the heart of democratic government . . . [A]ny alleged infringement of the right of citizens to vote must be carefully and meticulously scrutinized."  Reynolds v. Sims, 377 U.S. 533, 555 (1964).

Every candidate has a right to ensure that an election is conducted lawfully. However, court challenges, if any, must be based on facts, on evidence. These principles are fundamental to securing every citizen's right to vote and to our democracy.

The President of the United States has directed the filing of court cases seeking to stop ballots from being counted on the ground that there has been widespread ballot fraud. His sons have sharply criticized Republicans who are not backing their father's claims. Following these comments, Senators Ted Cruz and Lindsey Graham, both attorneys, and House Minority Leader Kevin McCarthy participated in interviews where they echoed the President's allegations of fraud.

But these claims of widespread fraud are without evidence and false. As preeminent Republican election lawyer Benjamin Ginsberg recently wrote, though Republicans have spent more than thirty years searching for evidence, "Proof of systematic fraud . . . doesn't exist."

Stopping the counting of eligible ballots would effectively nullify those citizens' fundamental right to vote. Since there is no factual basis – no evidence – to support President Trump’s claim of widespread fraud, his actions grossly interfere with the right to vote and cannot withstand any scrutiny, let alone the "careful[] and meticulous scrutin[y]" demanded by the Supreme Court.

In effect, the President seeks an unconstitutional "restriction on the right to vote" under Reynolds v. Sims. He is violating his duty to defend the Constitution.

Lawyers who represent the President, or his campaign, in challenges to this election – like all lawyers who appear in court – have an ethical obligation of candor to the court.  As embodied in the American Bar Association's Model Rules of Professional Conduct 3.3, "the lawyer must not allow the tribunal to be misled by false statements of … fact or evidence that the lawyer knows to be false."

A lawyer's oath is a sacred vow. Americans have a right to expect, and courts must require, that those who undermine the Constitution by perpetuating false allegations to prevent citizens from having their vote counted – effectively denying them the right to vote – be held to account.

This unprecedented moment transcends partisanship. The country and the world are watching to see how America responds to the President's shameful attack on the legitimacy of America's voting process.

There has never been a more important time for America's lawyers to acknowledge the importance of these solemn commitments, and to demand accountability for those lawyers and federal officials who do not live up to their oaths and ethical obligations.