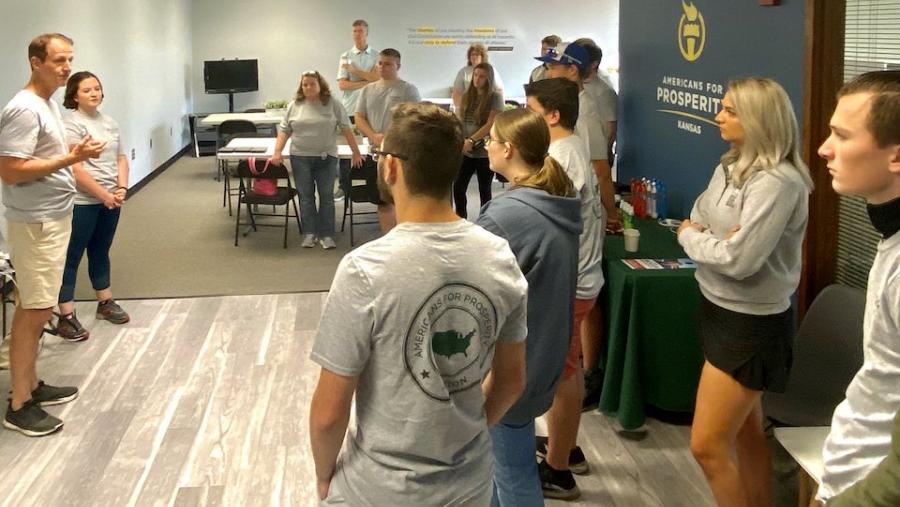 One unique feature of this year's federal elections is the absence of candidate canvassers at your door. Because of the pandemic, few groups are sending people door-to-door to persuade you to vote for their candidate. One group that is canvassing is the Super PAC of Charles Koch's astroturf organization, Americans for Prosperity (AFP).

According to filings with the Federal Election Commission, AFP's electoral arm, AFP Action, has spent $6.5 million so far this year for people to go door-to-door to talk to voters in key U.S. Senate races. AFP claims 3 million members but is still paying for canvassers, rather than recruiting volunteers.

AFP Action is both using its own staff and two outside firms for the canvassing. One outside firm also campaigned against Alexandria Ocasio-Cortez (D-NY); the other firm recently settled a federal lawsuit for allegedly not paying overtime to its employees.

According to the Center for Responsive Politics, the group has more than $30 million cash on hand, with $7 million coming from Koch Industries, $6.5 million from Koch’s Freedom Partners Action Fund before it folded, and the rest from a handful of very wealthy donors. Ronald Cameron, the owner and chairman of Mountaire Farms, a poultry processor, gave $3.5 million this election cycle.

AFP just announced a $5 million digital ad buy for the six states, but the 2020 total will be much higher. According to AFP president Tim Phillips, the group plans to spend $11 million just in North Carolina.

Almost $5.9 million of the money spent on canvassing so far has gone to reimburse AFP Action's parent organization, AFP, for staff time.

In 2018, the most recent information available, AFP's budget was $96.5 million. AFP's messages are in sync with those of other groups funded by Charles Koch – opposing labor unions, health care reform, stimulus spending, and any effort to combat climate change.

In addition to reimbursing AFP's staff for their political work, AFP Action is paying two vendors to send people into the field in the Senate races.

Mobilize the Message, a consulting firm, has received $178,000, most of it in the last two months to canvass in the battleground states. The only other federal effort in which Mobilize the Message has been involved is Stop the AOC PAC, a group that distributed attack mail against U.S. House member Alexandria Cortez-Ocasio (D-NY) between March and August of last year.

Mobilize the Message was started by GOP consultant Dan Becker. "Becker has been involved in dozens of conservative PACs over the years," QNS reported, "and is leading two other organizations aimed at reelecting President Trump in 2020."

Lee Fang, a writer at The Intercept, posted Mobilize the Message's instructions for paid canvassers during a recent ballot initiative fight in California.

The other firm used by AFP-Action is TalentWave, a Denver-based subsidiary of a temporary job employer that says it provides "contingent workforce management solutions." AFP Action has paid TalentWave $400,000 for go door-to-door operations.

AFP-Action also hired TalentWave in 2018 to campaign against Sen. Tammy Baldwin (D-WI) and in support of Marsha Blackburn (R-TN), both of whom kept their seats.

In May 2018, TalentWave’s parent companies, NTT Data and Synergy Services, were sued by employees in U.S. District Court in Colorado for violating the Fair Standards Labor Act. The employees complained that the company regularly had them work over 40 hours a week but did not pay overtime.

TalentWave settled the lawsuit in September 2018 for up to $575,000 in lost pay and damages. The, precise number is not disclosed, nor is the number of people in the class action.

On July 31, AFP claimed to CNBC to have knocked on 100,000 doors. On the other hand, "Many progressive leaders struggled to name any major national organizations on the left engaged in canvassing and said that, by and large, their supporters understood that doing so was a bad idea at this time," the Fort-Worth Star-Telegram reported.