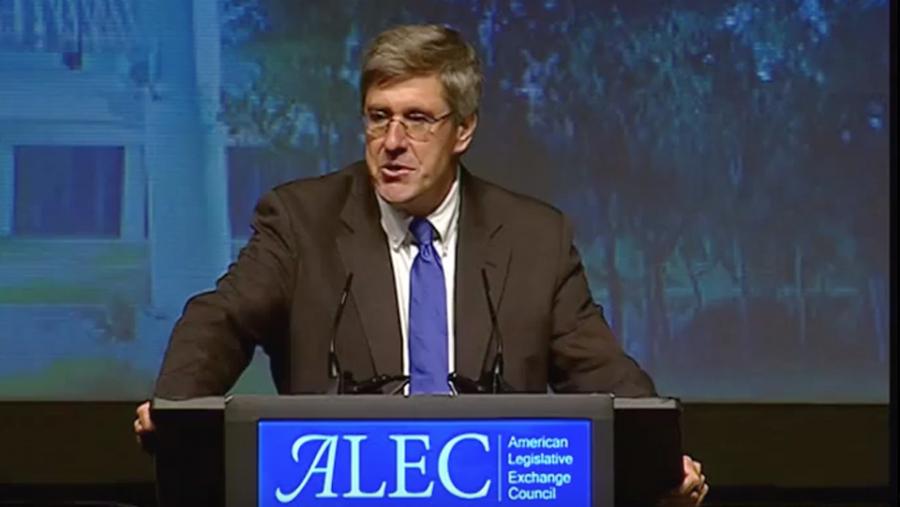 By Arn Pearson and Don Wiener

Timing is everything. Yesterday, conservative economist Stephen Moore sent out an email blast claiming that the surge in coronavirus in the South and West – where GOP governors have rushed to reopen the economy – is a "myth," and that "blue states have not only failed to keep their citizens safe, they've ruined their economies as well."

Hours later, Texas Governor Greg Abbott, a Republican, took the stage at a capitol press conference to say that "tougher actions" are going to be necessary if the state's "spiking" COVID-19 cases and hospitalizations continue to rise.

"To state the obvious, COVID-19 is now spreading at an unacceptable rate in Texas, and it must be corralled," Abbott said.

Moore serves on the private enterprise board of the American Legislative Exchange Council (ALEC), was an economic adviser to Trump's 2016 campaign, and co-founded the pro-business Club for Growth.

Moore has a daily newsletter, "Unleash Prosperity," that, like those of Rush Limbaugh and Sean Hannity, gives Republicans their talking points for the day. In yesterday's newsletter he unloaded on blue states for their pandemic lockdowns, and heralded red states for not doing the same. Both Moore and ALEC have actively campaigned against state coronavirus lockdowns and lobbied for a rapid reopening of the economy.

In his newsletter, Moore dismissed increases in coronavirus cases by arguing, like Trump and Mike Pence, that it's because more people are getting tested and that "very few of the newly captured cases are likely to become seriously ill or die."

To drive his point home, Moore used a graph from the Koch-funded Texas Public Policy Foundation (TPPF) showing a sharp drop in the number of Texas fatalities as a percentage of new cases. 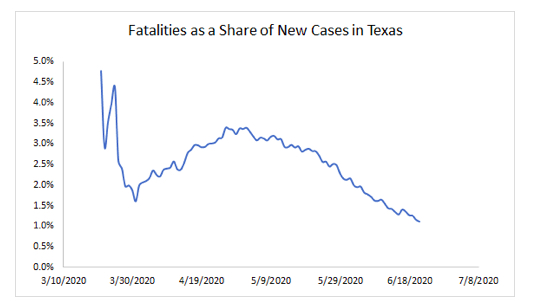 TPPF is a right-wing think tank with strong ties to Texas politicians like Senator Ted Cruz and former Governor Rick Perry. A Center for Media and Democracy review of records from Charles Koch-connected foundations and organizations shows the group receiving $3.3 million from Koch since its founding.

TPPF is an associate member of the State Policy Network, a coalition of right-wing policy organizations that fight against unions, environmental regulations, and Medicaid expansion.

Moore's and TPPF's spin on the numbers stands in stark contrast to the graph released by the Texas Department of State Health Services yesterday showing that coronavirus hospitalizations have doubled over the past month. 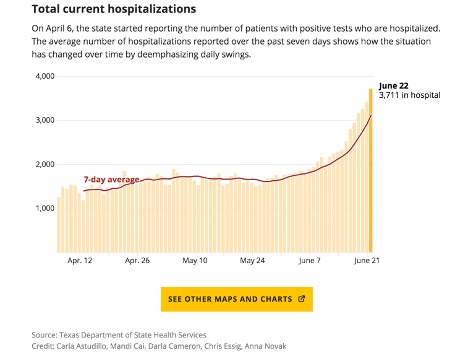 Last week the number of new cases in Texas rose from 1,422 to almost 3,300, hitting over 4,430 cases on June 20. Because deaths can lag hospitalizations by several weeks or more, the number of deaths will likely grow as well.

"If we continue on the same trajectory, my worry is Houston could become the worst affected city right now in North America," said Dr. Petere Hotez, infectious disease specialist at Baylor University. The rate increase of new cases and hospitalizations has prompted a judge in Harris County, which includes Houston, to mandate that masks be worn by customers and employees in all businesses. That ruling has been swiftly followed by mandatory mask orders in other cities and counties across the state.

Governor Abbott made Texas one of the first states to reopen businesses, including bars, in early May, and banned local governments from fining people for not wearing masks in public.

Yesterday, however, Abbott urged Texans to wear masks even if they think it's "inconvenient or an infringement of freedom."