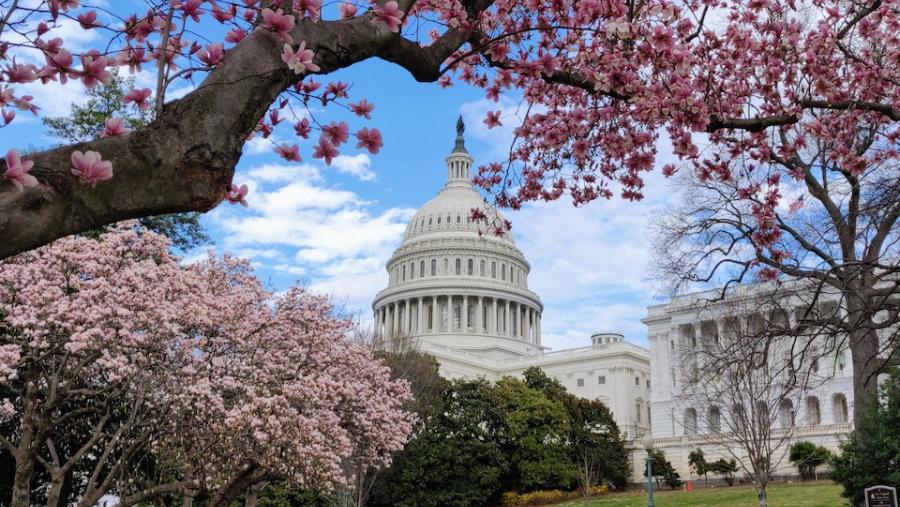 As the U.S. Senate prepares to debate the next round of coronavirus relief spending, the Koch-founded and backed Americans for Prosperity (AFP) is lobbying hard to make sure it does not include any bailouts for state and local governments whose budgets have been decimated by the public health crisis.

On May 15, the House passed a $3 trillion package of rescue measures as part of the HEROES Act (H.R. 6800) to deal with the pandemic, which includes $1 trillion for state and local governments that have seen their tax revenues plummet during the economic lockdowns.

The HEROES Act would extend and expand programs created by the $2.3 trillion CARES Act package signed into law in March. Along with new programs, it extends the Paycheck Protection Program's incentives for keeping workers on the payroll, provides another stimulus check, provides hazard duty pay for front-line workers, and extends and expands the moratorium on some evictions and foreclosures.

But the bailout portion of the HEROES Act has become the main target of right-wing groups.

Leading the attack is the Charles Koch-funded Americans for Prosperity. AFP, with affiliates in 38 states, is the Koch astroturf organization, activating people to oppose public sector unions, support repeal of Obamacare, and weaken environmental standards. AFP's budget, which is almost entirely supported through the Koch-funded Stand Together Chamber of Commerce with other right-wing foundations chipping in, was $96 million in 2018.

AFP views the $1 trillion that would go to state and local governments under the HEROES Act as an unnecessary bail-out of underfunded state and local pension funds and a reward for poor budget practices.

In its just issued "Federal Budget Assistance for State and Local Government" report, AFP says that the bailouts "aren't needed" and that, instead of receiving new money, state and local governments should use their so-called "rainy day" funds and cut spending. The group also argues that a COVID-19 bailout would "set a dangerous precedent for future bailouts, including for states that have irresponsibly underfunded their failing pension systems for years."

No local or state government says it would use new money to pay down pension fund debt, and most governments have identified the priority spending under HEROES to include essential workers, first responders, and health care workers.

Without HEROES Act funding, AFP says that $791 billion in federal grants to state and local governments under the current federal budget already accounts for 27 percent of those governments' budgets, with almost 60 percent of the federal funding being for Medicaid.

Now, under the CARES Act, the federal government is providing an additional $111 billion in direct assistance to governments, not including the additional funds for unemployment insurance and food stamps. The CARES Act also gives the Federal Reserve the authority to buy over $266 billion of state and municipal debt.

AFP argues that, even with the expected decline in state and local government revenue, the HEROES Act's additional $1 trillion is unneeded because state governments also have $79 billion in rainy-day funds, emergency money that can be used for disasters and other single events.

Even with the CARES Act funds, AFP's numbers do not add up.

The National Governor's Association estimates that $500 billion in new funds is needed by the states, saying, "In the absence of unrestricted fiscal support of at least $500 billion from the federal government, states will have to confront the prospect of significant reductions to critically important services all across this country, hampering public health, the economic recovery, and — in turn — our collective effort to get people back to work."

The National League of Cities says cities, villages and towns need another $250 billion in new funds beyond the CARES Act, and that estimate was made in April before the full toll of the pandemic and its effects on revenues was known.

For example, just one county in Ohio, Lucas, which includes Toledo, has seen a $30 million loss in sales tax revenue, creating a situation of "extreme peril." Similarly, Milwaukee County in Wisconsin projects a $28 million budget shortfall for 2020. And Cook County in Illinois, which includes Chicago, is facing a $200 million budget shortfall because it gets two-thirds of its revenue from economically sensitive taxes such on sales, hotels, and amusements that have been hard hit by the pandemic.

The COVID-19 pandemic has hit schools just as hard. The Lee County school district in Florida, for instance, is grappling with "five different scenarios ranging in a budget shortfall from $20 million all the way to $143 million," according to a WINK news report. "All of them call for a cut in per-student spending."

The UpJohn Institute for Employment Research estimates "the total budget problem for state and local governments to be $899 billion through end of 2021."

The $111 billion in direct assistance under the CARES Act does not deal with a shortfall of this magnitude. Even if the Federal Reserve exercised its option to buy state and local government debt, it would still be insufficient, and that approach is fraught with financial and political problems..

AFP's real agenda is to shrink the size of government and oppose anything that strengthens the role of public employee unions.

AFP has made busting public sector unions a high priority. In Wisconsin and elsewhere, AFP has fought to restrict the collective bargaining rights of public sector unions and their members. Teacher unions have been a particular target, as right-wing groups like AFP believe that crushing them is the key to privatizing education and crippling progressive causes and the Democratic Party.

Americans for Prosperity has also worked to take over school boards, supported charter schools through legislation and referenda, and supported state and local elected officials who championed charters.

In its policy paper attacking money for state and local governments, AFP makes two additional arguments. It worries about increasing the federal deficit, although it lobbied hard to push through Trump's sweeping tax cuts on corporations and the wealthy in 2017, spending $20 million largely on TV and social media directed at recalcitrant members of Congress. The nonpartisan Congressional Budget Office projects that those tax cuts will add $1.9 trillion to the federal deficit by 2028.

AFP also argues that, "Instead of asking Washington for bailouts, state lawmakers should govern responsibly by finding savings in current budgets, including by ending corporate welfare spending."

Ironically, Good Jobs First's Subsidy Tracker documents more than $363 million in public subsidies to Koch Industries and its subsidiaries from jurisdictions in 27 states.

AFP has also worked with its allies in the American Legislative Exchange Council (ALEC) to lobby in opposition to the House proposal for a bailout for state and local governments.

ALEC, a pay-to-play operation where legislators and corporate lobbyists meet behind closed doors to adopt model legislation on a broad range of public policy issues, published a letter on May 12, "State Leaders Say 'No Thanks' to Federal Bailout," asking the federal government to avoid sending more money to the states because, "a federal bailout of state budgets would be counterproductive—rewarding states that have made poor financial decisions at the expense of those that have been fiscally responsible."

In addition to 185 ALEC legislators who signed on, 34 AFP state directors and AFP's president Tim Phillips added their signatures. CMD acquired an email through a public records request in Texas showing that AFP was aiding in the effort to encourage legislators to sign on.

"If you're not interested in signing the letter would you possibly consider issuing a press release or statement of opposition to Texas bailing out states like California, New York, and Illinois?" AFP-Texas policy director Samuel Sheetz wrote. "We are even asking to film short videos for social media that AFP Texas can retweet etc."

AFP is very active in ALEC. At its 2019 annual meeting, AFP sent at least 55 staffers to attend.

AFP appears to be seizing on the fiscal crisis created by coronavirus to advance its long-held goal of "reducing the size and scope of government," even at a time when it is most needed.

David Armiak contributed to this report.