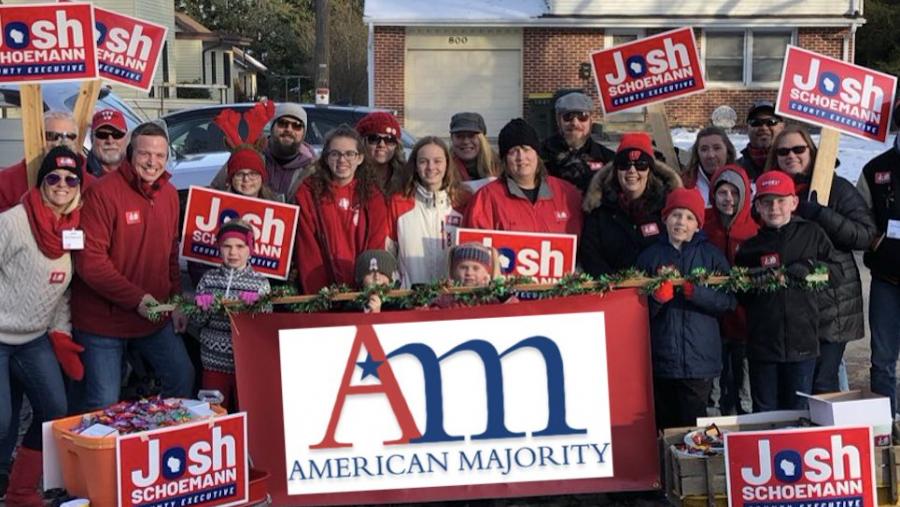 American Majority, a 501(c)3 nonprofit, right-wing candidate training operation based in Virginia, claims to have successfully placed 42 of its trainees into local and state public office in Wisconsin after last week's controversial elections.

The group describes its role as "work[ing] to build a farm team of New Leaders at all levels of government."

Out of 62 "solid conservative candidates" trained by American Majority that sought office in Wisconsin, the 68 percent that won include "1 County Executive, 2 Judges, 23 County Board Supervisors, 8 School Board Members, and 8 Municipal Leaders."

Besides highlighting candidate Josh Schoemann, who won the Washington County Executive race, American Majority does not disclose who the other election winners are.

American Majority brings in close to $600,000 in annual revenue, according to it its latest available IRS filing. The tax-exempt group describes itself as nonpartisan, but it was created by Republicans to train Republicans.

Ned Ryun, founder and CEO of American Majority was a writer for President George W. Bush  and is son of former U.S. Rep. Jim Ryun (KS-R). Ryun received early help in setting up the group from right-wing political operative Eric O’Keefe, director of Empower Wisconsin, and his Sam Adams Alliance.

American Majority's National Executive Director Matt Batzel, takes credits for "deploying a massive online army through co-creating a Twitter hashtag -- #Wiright" and organized the "I Stand with Walker" rally in 2011, when Walker was facing huge protests for eliminating collective bargaining rights for most public employees.

American Majority's political advocacy group, American Majority Action (AMA), was also active in Wisconsin during the spring elections. Nelson wrote in a press release that AMA made 145,000 "live voter contacts" to turn out the vote for right-wing Supreme Court Justice Daniel Kelly, whose campaign shared an address with the Republican Party of Wisconsin. Kelly ended up losing to Dane County Judge Jill Karofsky.

"AMA's activist groundswell was powered by Voter Gravity's groundbreaking technology that allows staff to quickly and accurately get out the vote through micro-targeting voters," the press release concludes.

AMA holds an 84 percent controlling stake in Voter Gravity, according to its IRS filings.

The software was also used in the spring 2019 Wisconsin Supreme Court election by AMA "activists" to knock on 15,000 doors to turn out the vote for right-wing Justice Brian Hagedorn, who won by a razor thin margin.

Last month, SC Magazine reported that Voter Gravity was providing access to its voter data to a Republican canvassing app called "Campaign Sidekick," after researchers at UpGuard discovered a security vulnerability with the app. The founder and CEO of Campaign Sidekick is Drew Ryun, Ned Ryun's twin brother.

Interestingly, Voter Gravity also created an app called "Pericles" for the Brexit Party that used data from the UK's electoral register to provide data points and location information on voters, its first known activities outside the United States.

AMA's 2018 IRS filing shows that it provides financial support to the Christian Right groups Wisconsin Family Action ($11,520) and Wisconsin Right to Life ($9,000), and gave $50,000 to the unregistered non-profit Wisconsin Common Sense (WCS). WCS has the same address as Kim Simac, a failed Republican candidate for State Senate in 2011 and founder of the group Northwoods Patriots.

AMA, as a registered 501(c)4 nonprofit is not required to disclose its donors, but a review of Federal Election Commission filings shows that the GOP megadonor Richard Uihlein gave it $250,000 in July 2018. AMA was working to get out the vote for the Uihlein-backed Wisconsin U.S. Senate candidate, Kevin Nicholson, at the time.

American Majority's candidate trainings in the state of Wisconsin have been supported with $2.5 million (2010-2018) from the Milwaukee-based Lynde and Harry Bradley Foundation and another $142,000 (2013-2017) from its donor conduit, the Bradley Impact Fund.

American Majority's purpose is to train citizens and grassroots activists in the rules and methods necessary to run a successful political campaign…. American Majority has trained 3,853 pro-freedom individuals at more than 100 training events. 208 trained candidates have run for state or local office, 181 advanced out of their primaries to the general election. 104 went on to win their elections. These include state legislators, 45 county board supervisors, 27 municipal office holders, 22 school board members and 5 judges.

The funding for American Majority-Wisconsin, "its most effective chapter," is an integral piece of the "Wisconsin Network" of  right-wing groups bankrolled by Bradley in the state. Bradley used its successful investments as a model to develop a strategy to weaponize philanthropy in the states in order to influence public policy and elections.

Other Wisconsin-based contributions identified through IRS filings to American Majority include $32,000 (2012-2016) from the Einhorn Family Foundation. Steven Einhorn sits on the board of the Bradley Impact Fund.

The preferred donor conduits of the Koch brothers, DonorsTrust and Donors Capital Fund, have given a combined $7.9 million (2008-2018) to American Majority.

Other significant support to American Majority came from billionaires Dan and Farris Wilks, who made their fortune from fracking, who gave $2.1 million in 2012, and Richard Uihlein, who has given $625,000 (2015-2017) through the Ed Uihlein Family Foundation.

I found this video clip of Ned Ryun decrying the Koch Brothers as vultures. What's going on here? Is he really that duplicitous? https://www.realclearpolitics.com/video/2019/12/05/ned_ryun_is_the_conservative_movement_about_the_vulture_capitalist_class_or_the_american_worker.html