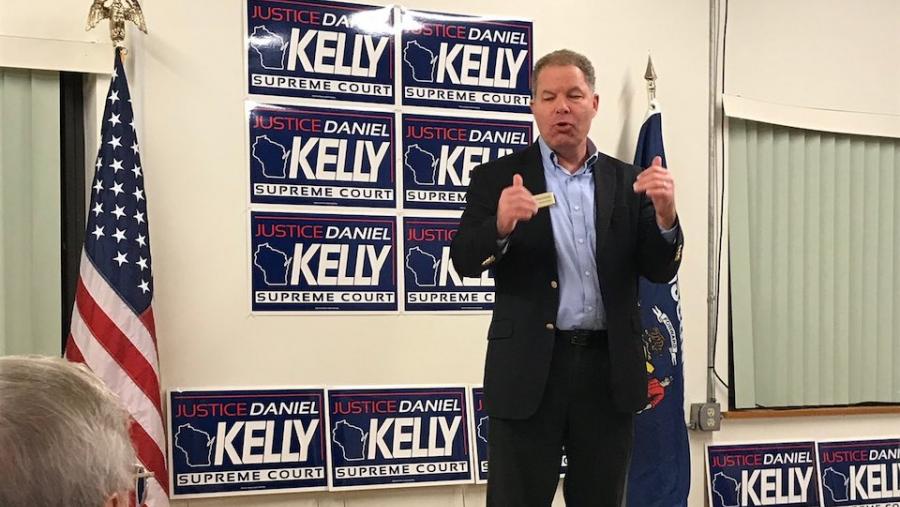 A campaign finance filing for right-wing Supreme Court Justice Daniel Kelly released yesterday shows that he raised $556,183 in the second half of 2019, bringing his total for the year to $799,977.

Kelly's fundraising haul is over double his nearest challenger Dane County Judge Jill Karofsky who raised $348,602 in 2019, and over five times what Marquette University Law professor Ed Fallone brought in at $149,732.

The release of the filings comes as the race is expected to heat up, with the primary to determine the final two candidates just over a month away on February 18.

Trump endorsed Kelly at a Milwaukee rally earlier in the week, saying, "Last spring, Wisconsin voters, as you know, elected a great judge to your state Supreme Court. This spring you have a chance to elect another terrific judge. Justice Daniel Kelly. Go vote for Justice Daniel Kelly to defend the rule of law in Wisconsin."

Billionaire Diane Hendricks of ABC Supply and her daughter Kim were the only two contributors to give $20,000 each to Kelly's campaign in 2019, the maximum contribution allowed to a candidate for the state's highest court in an election cycle. The CEO of Hendricks Holding Co., Brent Fox, also gave $10,000, bringing the total contributions from Hendricks’s inner circle to  $50,000.

Hendricks was Walker's top donor while he was in office, and contributed $5 million to his Unintimidated PAC for his failed 2016 presidential run.

Hendricks serves on the board of the Lynde and Harry Bradley Foundation and its donor conduit, the Bradley Impact Fund. Bradley has been instrumental in creating and maintaining the right-wing infrastructure in Wisconsin over the last decade.

The Michels family gave the next largest amount, $40,000, to Kelly's campaign. The Michels Corporation, headquartered in Brownsville, is the largest construction company in Wisconsin. Vice President of the company, Tim Michels, was the Republican nominee for U.S. Senate in 2004, but lost to former Senator Russ Feingold.

GOP megadonors Elizabeth and Richard Uihlein, owners of the Uline shipping supply company, gave $20,000 to Kelly. The Uihleins have regularly contributed large sums to Republican candidates for office in Wisconsin. Like Hendricks, they were major supporters to Walker and gave $5 million to his Unintimidated PAC. The Uihleins also gave millions to the campaigns of U.S. Senator Ron Johnson and Kevin Nicholson, who lost his campaign for U.S. Senate in the 2018 republican primary.

Fred and Sandra Young also contributed $20,000 to Kelly's campaign. The Youngs are major Republican donors, and Fred is tied to the Koch political network, sitting on the boards of the Cato Institute and the Reason Foundation.