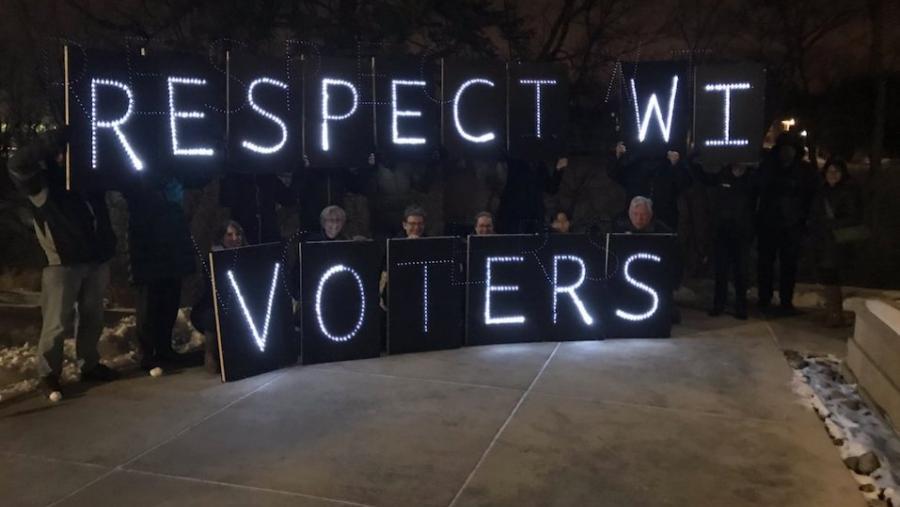 By David Armiak and Arn Pearson.

The efforts of the right-wing Wisconsin Institute for Law & Liberty (WILL) to force the purge of hundreds of thousands of Wisconsin voters in advance of this year's critical elections has garnered national attention and sparked a complex legal battle.

The stakes in the case are high. WILL is fighting to have more than 200,000 voters - most of whom reside in heavily Democratic areas - removed from the rolls in a swing state that Trump won by less than 23,000 votes in 2016. And in April, voters in the Badger state will head to the polls to vote in a hotly contested state Supreme Court election and the Democratic primary for president. Wisconsin legislators are also up for election this year, and the control of the legislature will determine who gets to draw the district maps for the next decade.

The case has thrust Wisconsin to the forefront in this year's voter suppression wars and reflects a larger Republican strategy to tilt the playing field by making it harder for low-income, student, and minority citizens to vote. According to a 2018 report by the U.S. Commission on Civil Rights, "voter roll purges often disproportionately affect African-American or Latino-American voters."

WILL, the conservative litigation group leading the charge in Wisconsin, is hardly a neutral player in this strategy. Considered the "MVP" of the right-wing infrastructure built in the state over the past decade, WILL's leaders and funders include many of Wisconsin's heaviest Republican hitters and have collectively poured at least $12 million into the Wisconsin GOP and its candidates over the past two decades.

On October 16, 2019, WILL filed a legal complaint against the Wisconsin Elections Commission (WEC) arguing that the Commission is required by law to remove more than 200,000 voters flagged as "movers" by the Electronic Registration Information Center (ERIC). ERIC, a project of Pew Charitable Trusts used by 28 states and the District of Columbia, uses official data, such as motor vehicle registrations and U.S. Postal Service addresses, to help states identify people eligible for voter registration and to keep voter rolls up to date.

Based on ERIC's "mover" database, WEC began sending out postcards in October 2017 to flagged voters directing them to confirm their address or reregister in order to stay on the voter rolls. As a result of that mailing, WEC deactivated 335,701 voters in January 2018. However, flaws in the data and process created significant problems in the 2018 primaries when thousands of voters showed up at the polls, only to find that they were no longer registered. In 2019, WEC concluded that problems with the ERIC database resulted in an error rate of at least 14 percent, causing 46,475 voters to be deactivated even though they never moved.

WEC sent out another 234,000 postcards to voters identified by ERIC's "mover" database in October 2019, and 209,000 did not respond. However, given the error rate on the 2018 list, WEC decided to wait until after the 2020 elections to deactivate those voters.

WILL claims that state law dictates that voters must be purged from the rolls 30 days after failing to respond to a WEC verification mailing based on "reliable information" that they have moved. WEC contends that because ERIC's "mover" database is not reliable, they have discretion on how and when to proceed, and have decided to give voters until the spring of 2021 to confirm or update their information.

On December 13, 2019, a lower court judge agreed with WILL and ordered WEC to remove the 209,000 voters from the rolls. On Monday, WEC commissioners were found in contempt for not complying with the Judge's order. However, the Supreme Court voted narrowly to not take the case on an expedited basis, bumping it instead to an appeals court which granted a stay on the purge order on Tuesday, making it unlikely that anyone will be removed from the rolls before the April primary.

Meanwhile, the League of Women Voters filed suit in federal court to prevent the purge, arguing that it would violate voters' constitutional rights to due process, and the Republican-dominated legislature asked the federal court to dismiss the League's action on January 6.

In a November 2018 lame duck session, Republicans in the legislature considered moving the presidential primary election to March 2020 to give Walker-appointed Justice Daniel Kelly a better shot at winning his primary contest. The Republican leadership ultimately decided against the idea after city and county clerks united in opposition due to the taxpayer expense and headaches that holding three elections in three months would cause.

WILL's close connection with Justice Kelly - whose 2020 election bid would be directly affected by the outcome of WILL's lawsuit - and the political goals of its leaders and big funders call into question the group's nonpartisan motives in aggressively pursuing its voter purge case.

Justice Kelly used to serve on WILL's legal advisory board, took campaign contributions from two WILL board members last year one week before ruling in favor of WILL in a pending case, and served as president and general counsel of one of WILL's largest funders, the Kern Family Foundation.

A Center for Media and Democracy (CMD) analysis of campaign contributions maintained by the Wisconsin Democracy Campaign shows that WILL's staff, board, and major funders have contributed more than $2 million to Wisconsin political candidates over the past 20 years, the vast majority of which went to Republicans.

Diane Hendricks, another Bradley Foundation and BIF board member, who is the largest known individual donor to WILL, has given $4.7 million to the Wisconsin Republican Party between 1998 and 2018, and $801,065 to Republican and right-wing judicial candidates for office in the state between 1991 and 2019. Hendricks was Walker's top donor, and gave $5 million to his Unintimidated PAC to support his run for president.

Hendricks was ranked 35th among all federal contributors by Open Secrets in the 2018 election cycle with $4.5 million to Republican and conservative candidates, parties, political action committees, 527 organizations, and Carey committees.

"Counsel to the Conservative Movement"

WILL, with $1.9 million in revenue according to its latest available tax filing, was founded in 2011 with "major support" from the right-wing Bradley Foundation, an internal grant proposal record states. Since its founding, Bradley and its donor conduit, the Bradley Impact Fund, have provided WILL with 52 percent of its revenue, CMD has found.

"If the Wisconsin Network had an MVP it would be Wisconsin Institute for Law and Liberty (WILL). It is, as founder Rick Esenberg likes to say, counsel to the movement. Nearly all of the organizations of the conservative infrastructure come to WILL for advice," a Bradley staffer wrote in another internal grant proposal record.

The grant proposal records were analyzed as part of CMD's investigation into hacked internal Bradley files released online in October 2016. CMD concluded that, "The Bradley Foundation, organized as a tax-exempt 'charitable' foundation under 501(c)(3) of the tax code, appears to be pursuing a highly partisan game plan: funding an 'infrastructure' on the right that benefits the Republican Party, while at the same time attempting to crush supporters of the Democratic Party."

Litigation centers, like WILL, were one of eight aspects of "successful state infrastructure," that Bradley identified for strategic investments. The others were: respected and dynamic leadership, quality think tank(s), investigative journalism, opposition research, receptive policymakers, symbiotic relationship with grassroots groups, and committed local funding support.

The Waukesha-based KFF, with $668.3 million in assets according to its latest IRS filing, has provided WILL with just under $1.5 million in funds between 2012 and 2018. Like Bradley, KFF focuses “on initiatives that have long-term, systemic impact,” which is not surprising considering Bradley's President and CEO Richard Graber sits on its board of directors.

KFF began when Robert and Patricia Kern sold part of their Generac Power Systems, an international power backup company, in 1998.

The Milwaukee-based Rite-Hite Corporation Foundation sprung off of Rite-Hite, a manufacturing company that WILL President Esenberg previously worked at as general counsel. Esenberg's former employer, Rite-Hite owner and CEO Michael White, is Chairman of WILL's board of directors. Rite-Hite's Foundation has provided $520,000 to WILL between 2012 and 2018.

An internal Bradley spreadsheet detailing matching grants shows that other major funders to WILL include GOP megadonor and Bradley board member Diane Hendricks, who gave $75,000 to WILL in 2014 and possibly more in 2011, when she donated $2 million for "Wisconsin based C(3) efforts"; right-wing operative and director at Empower Wisconsin Eric O’Keefe, who gave $10,000 in 2014; and the late investor and furniture maker George Mosher, who gave $10,000 in 2014.

Outside of Wisconsin, the Walton Family Foundation is WILL's biggest funder to the tune of $1.5 million between 2014 and 2018. The Waltons continue to profit immensely off their Wallmart empire, which had $514.4 billion in revenue in 2019.

The State Policy Network (SPN), of which WILL is an associate member, provided it with $98,850 in 2016-2017. A web of right-wing "think tanks," advocacy groups, and other registered nonprofits in all 50 states, Washington, D.C., Canada, and the United Kingdom, SPN groups play an integral role in getting legislation passed in state legislatures by providing academic legitimacy when called upon to testify at hearings or through the production of "studies." Many SPN groups now have litigation centers in house thanks to Bradley, which gave $350,000 in 2014 to launch a "state-based litigation alliance."