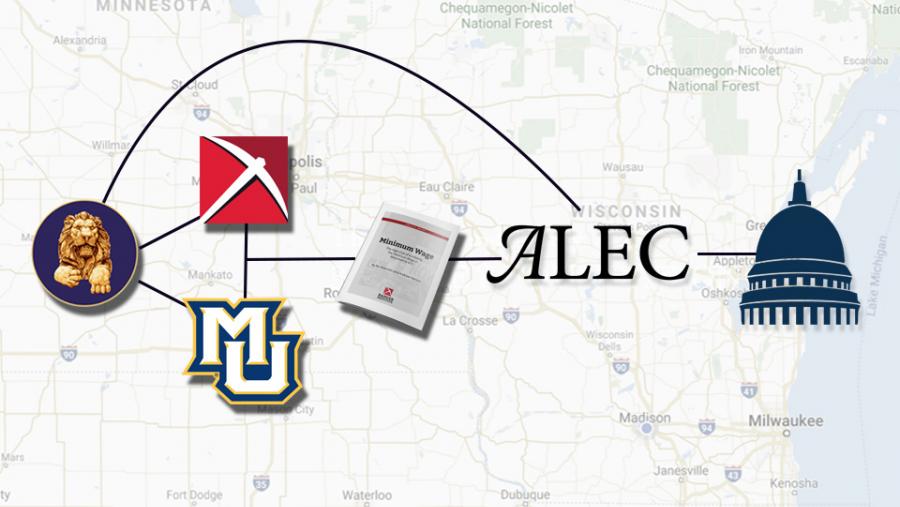 The proposed increase of 75 cents per year for the next three years would raise the minimum wage from $7.25 to $10.50 per hour by 2023 and put more money in the pockets of Wisconsin's working poor. Evers' budget would also create a task force to study the feasibility of moving to a $15 per hour minimum wage.

Not surprisingly, the deployment of the Bradley Foundation's right-wing infrastructure against Evers' proposal has followed the right-wing playbook of "weaponized philanthropy" exposed in a series of 2017 investigative reports by the Center for Media and Democracy (CMD).

Following the playbook, a Bradley-funded "think tank" typically teams up with Koch-funded university programs to publish studies that match the corporate funders' ideology and policy positions while giving them academic credibility. Those studies are then reported on by Bradley-funded groups' "news outlets," latched onto by political advocacy operations like Americans for Prosperity, and echoed by legislative members of the American Legislative Exchange Council (ALEC).

In the current Wisconsin fight, The Badger Institute, formerly known as the Wisconsin Policy Research Institute, commissioned a "policy brief" through Marquette University's economics department, "Minimum Wage: The High Cost of Increasing the Minimum Wage in Wisconsin to $15," warning that the raise would lead to more than 350,000 workers losing their jobs. The report was authored by Badger Institute visiting fellows Ike Brannon and Andrew Hanson.

The Badger Institute has received at least $14,180,000 dollars in funding from Bradley, including $375,000 in 2018. It is an "affiliate" member of the State Policy Network (SPN), the group that The New Yorker's Jane Mayer called "a coordinated collection of corporate front groups funded and steered by cash from undisclosed conservative and corporate players." The Bradley Foundation has also gifted millions to Marquette University, and Charles Koch has provided another $100,000.

The Koch-funded Washington Free Beacon and the Franklin News Network (formerly Franklin Center for Government and Public Integrity) aided in the report's rollout. Franklin has been praised by Bradley as an "effective" and "valuable partner" in the state, leading the foundation to give Franklin $975,500 between 2010 and 2016.

From there, the findings were reported by WXPR, the journal Economic Policy, and elsewhere.

Wisconsin State Representative Barbara Dittrich (R-38), Vice-Chair of the Committee on Workforce Development and member of the Committee on Labor and Integrated Employment, took to Twitter, citing the Badger Institute's research as a cause for concern "about making things worse for workers rather than better."

During deliberations regarding Evers' budget before the Joint Committee on Finance (JCF) in April, Republican state legislators argued that the minimum wage increase would hurt the economy, echoing sentiments put forth by the Institute.

This is the second time the Bradley infrastructure has been deployed to oppose Governor Evers' budget. In February 2019, Wisconsin Republican State Senators Dave Craig, Duey Stroebel, and Chris Kapenga held a news conference to unveil findings that expanding Medicaid in the state (BadgerCare) would cost taxpayers a whopping $600 million. The findings were based on a report by the Wisconsin Institute for Law & Liberty (WILL) and the University of Wisconsin-Madison's Center for Research on the Wisconsin Economy (CROWE) that experts have criticized as biased and based on flawed methodology.

This year's playbook mirrors past campaigns against raising the minimum wage in Wisconsin and elsewhere. Internal Bradley files examined by CMD show that funds went to the right-wing MacIver Institute for a 2015 minimum wage report that spun low wages as somehow good for the working poor.

Bradley's 2018 IRS filing is unavailable, but in an interesting twist, Bradley discloses in its 2018 Annual Report $625,000 "to support the Interstate Policy Alliance" through the State Policy Network, not the Employment Policies Institute.

The Badger Institute's report warns that 350,000 people could lose their jobs if Wisconsin doubles its minimum wage to $15 per hour. Leaving aside the fact that Governor Evers budget only sets up a study of a $15 minimum wage while phasing in much smaller annual increases, the experience of other states and cities that have recently increased minimum wages conflicts with that conclusion.

Governor Evers' proposal mirrors what Wisconsin's neighbor, Minnesota, has done over the past decades. Under Governor Mark Dayton's leadership, Minnesota raised its minimum wage from $7.25 to $9.50 between 2014 and 2017. Yet, an Economic Policy Institute (EPI) report finds that Minnesota has outperformed Wisconsin on job growth and that "on virtually every metric, workers and families in Minnesota are better off than their counterparts in Wisconsin."

The EPI report states that the "proximity and many similarities" of the two states make them "a compelling case study for assessing which agenda leads to better outcomes for working people and their families." EPI found little evidence in Minnesota that the "decision to raise the state minimum wage... did anything to hamper job growth."

Similarly, a University of California Berkeley study concluded that there was "no distinguishable decrease in employment in Seattle" due to the city's move to a $15 minimum wage. The UC Berkeley report reached similar conclusions about five other cities that raised their minimum wage and is in keeping with a past study on New Jersey and Pennsylvania wage increases.

Approval of Evers' budget is set to continue as a bitter fight between the Democratic executive and Republican-controlled legislature, with both indicating a refusal to budge on several key issues. Unless they agree on some form of a budget before July 1, base spending levels from the previous year will continue until they do.