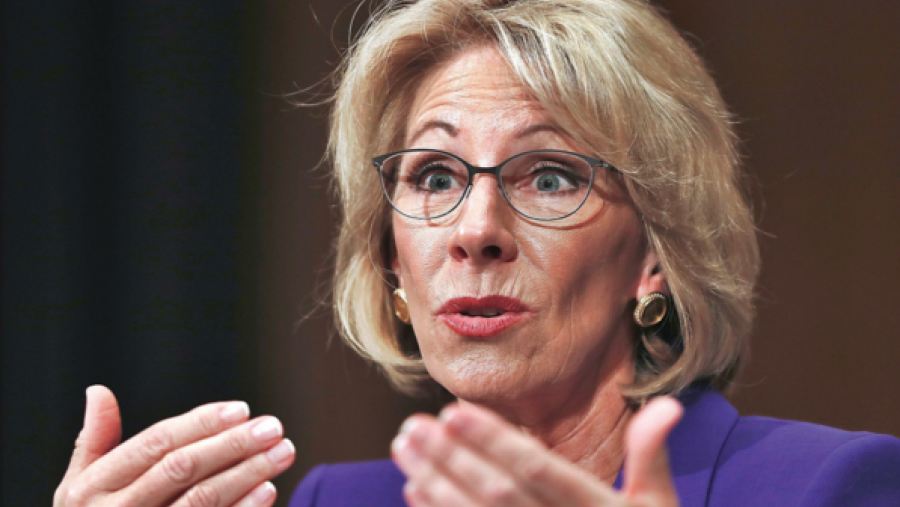 Donald Trump's pick for Secretary of Education, Betsy DeVos, wants America to believe she's all about giving parents the right to choose what's best for their children. But her radical policies and politics have left a legacy of crumbling schools and poisoned water in her home state of Michigan that parents neither asked for nor wanted.

Billionaire DeVos—who has no relevant education experience and never attended public school—won the nomination by virtue of her family being one of the largest soft money contributors to the Republican National Committee and the dominant political force in Michigan, where Trump's razor-thin margin helped him clinch his Electoral College victory.

At her confirmation hearing, Senator Bernie Sanders asked DeVos, "Do you think that if you were not a multi-billionaire, if your family had not made hundreds of millions of dollars in contributions to the Republican Party, that you would be sitting here today?"

DeVos once infamously admitted that her family "expects a return on our investment" in political campaigns.

DeVos and her husband Dick have been leading advocates for privatizing public education, expanding charter schools, and providing taxpayer-funded vouchers for private and religious schools, and have bankrolled politicians and special interest groups to promote that agenda.

The DeVos family has been promoting and funding efforts to "Christianize" public education for more than twenty years. In the DeVos' personal worldview, public schools inappropriately vie with religion for the hearts and minds of students.

"Our desire is to confront the culture in ways that will continue to advance God's Kingdom," said Betsy in a 2001 interview. "As we look at many communities in our country, the church has been displaced by the public school as the center for activity," added Dick.

Their radical solution entails redefining "public education" by weakening and defunding public schools while diverting tax dollars to subsidize private and religious institutions, in ways that confront current constitutional notions about the separation of church and state.

Parents in Michigan chose to reject that vision by wide margins. A voter initiative for school vouchers pushed by the DeVos family in 2000 was spurned by 69% of the voters, and Dick DeVos lost by a huge margin when he ran for governor in 2006, despite spending $35 million of the family fortune.

The DeVos family pumped millions into state elections, ballot initiatives, and right-wing groups, like the Mackinac Center for Public Policy and the Great Lakes Education Project (GLEP). They used their fortune to grease the skids for Governor Rick Snyder's election in 2010, and then backed aggressive campaigns to win passage of Michigan's controversial emergency manager law and "right-to-work" legislation.

All in all, the DeVos family pumped more than $44 million into Michigan Republican campaign committees and candidates between 1997 and 2012, and followed that up with another $8.3 million in Michigan's 2014 and 2016 elections. And that's just what was disclosed. They spent millions more on special interest groups that do not report their spending to influence elections and legislation.

Following his election, Governor Snyder won passage of the emergency manager law used to strip Flint of any local control and take over Detroit's public school system, which was championed by the DeVos-funded Mackinac Center. Voters repealed the law at the ballot in 2012, but Snyder quickly rammed through a new version. The results have been disastrous.

Under Snyder's control, Flint was forced to abandon its clean water source and accept polluted water from the Flint River—water that corroded the city's outdated lead pipes and resulted in the lead contamination of drinking water for thousands of children and families. The poisoning of Flint became a national scandal and sparked congressional hearings and a criminal investigation, which so far has resulted in the indictment of two former Flint emergency managers appointed by Snyder.

In Detroit, Snyder used state control to defund public schools and allow a "Wild West" of charter schools to spring up. The condition of public schools deteriorated to dangerous levels, prompting hundreds of Detroit teachers to launch "sick outs" in January 2016 out of protest. Detroit parents lost their democratic rights, while unelected managers closed two-thirds of their schools.

Educational standards didn't fare any better. After six years under emergency managers, Detroit's testing scores had declined to the lowest in the nation, the school system was drowning in red ink, and nearly a third of charter schools had folded due to academic or financial reasons. The New York Times called it, "a public education fiasco that is perhaps unparalleled in the United States."

The deplorable situation in Detroit's schools prompted the legislature to act in 2016, but heavy lobbying by the DeVos family and GLEP resulted in killing charter accountability standards adopted by the Senate while imposing new limitations on public schools and penalizing "sick outs" as illegal strikes. Critics point out that GLEP had greater access to negotiations on the bill than did Detroit's legislative delegation.

Legislators voting for the DeVos-backed bill had received thousands in campaign contributions from the family, not unlike the hundreds of thousands received by U.S. Senators now handling Betsy DeVos' nomination.

And rewards for those who toed the DeVos line came quickly. According to the Detroit Free Press:

The DeVos family, owners of the largest charter lobbying organization, has showered Michigan Republican candidates and organizations with impressive and near-unprecedented amounts of money this campaign cycle: $1.45 million in June and July alone — over a seven-week period, an average of $25,000 a day.

The giving began in earnest on June 13, just five days after Republican members of the state Senate reversed themselves on the question of whether Michigan charter schools need more oversight.

Meanwhile, Betsy DeVos has been pushing the same education privatization and deregulation scheme nationally through groups like the American Federation for Children, the Alliance for School Choice, and the American Legislative Exchange Council (ALEC).

And it appears she has the same future in mind for the nation as she had for Detroit. When asked by Senator Tim Kaine to commit that all schools that receive federal funding—including charter and private schools—should be held to the same accountability standards, DeVos hedged and then said "no."

Whether Trump embraces Betsy DeVos' radical agenda, or is now doling out federal agencies to billionaire campaign funders the way past presidents have doled out ambassadorships, it's clear that the nation's public schools will be DeVos' next casualty if the Senate confirms her as Education Secretary.