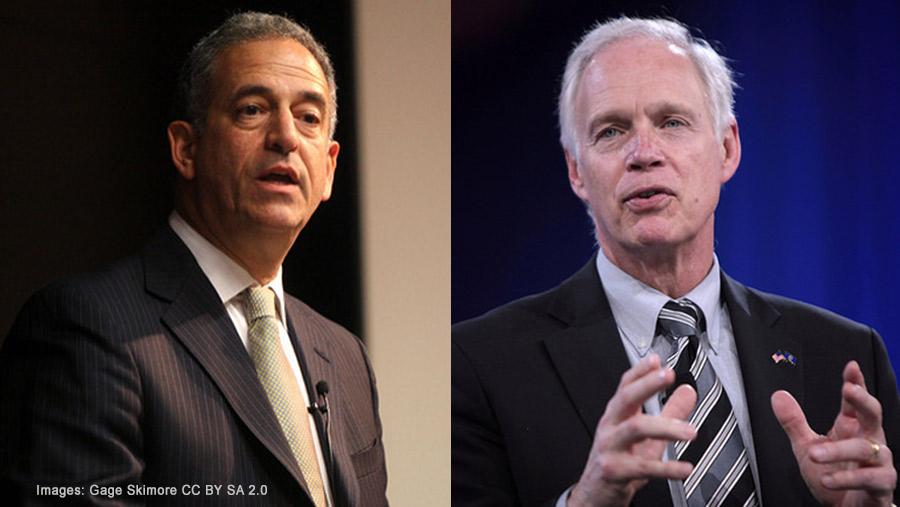 Wednesday's Marquette Law School Poll says the race between U.S. Senator Ron Johnson and challenger Russ Feingold has tightened. That poll, which gives Hillary Clinton a comfortable lead, 46 to 40, over Donald Trump has Feingold at 45 percent to 44 percent for Johnson.

The tightening race has unleashed a flood of new ads from outside groups attacking Feingold as the race enters its final days.

In the Tea Party mid-term elections of 2010 following the financial crisis, Johnson gave $8.8 million to his campaign, but shortly after the election he got $10 million in "deferred compensation" from PACUR, a plastics company started and controlled by his wife's family. Johnson was also helped in that race by outside spending that tried to smear Feingold with growing budget deficits despite the financial crisis and his record as a budget hawk. But, in this year's race, the big money appears to be coming from deep-pocketed outside groups that are rushing in to aid Johnson in the hopes of maintaining GOP control in the U.S. Senate.

For many in Wisconsin the race is a referendum on big money in politics.

"As with 2010, there is an avalanche of outside special interest dark money inundating the airwaves and mailboxes of Wisconsinites on behalf of, and against both candidates. The Koch Brothers, the U.S. Chamber and other groups are attacking Feingold as if he were the incumbent and trying to paint Feingold as a hypocrite for supporting campaign finance reform, transparency and sensible limits on spending and for setting up a perfectly legal and transparent political action committee after his loss to Johnson in 2010," said Jay Heck of Common Cause.

In an attempt to limit special interest money in the race, early on Feingold proposed that he and Johnson agree to a "Badger Pledge" that stipulated that if an outside special interest group spend money in support of a candidate that the campaign of the candidate would contribute an equal amount of money to a charity. Johnson never responded to the challenge, but subsequently tried to paint Feingold as a hypocrite for aggressively fundraising in support of his campaign.

Now in the final week, Wisconsin is bombarded with new ads by outside special interests and GOP committees overwhelmingly in support of Johnson.

Reform America Fund and Reform Wisconsin Fund are registered as separate entities; however, they appear to be running as a single organization. Per FEC filings Reform American Fund is being managed by Walker's top campaign guru R.J. Johnson and being bankrolled by Wisconsin billionaire Diane Hendricks, who has contributed more than $5 million since September 16. Hendricks is the co-founder of ABC Supply, the largest roofing wholesaler in the nation. She is the richest woman in Wisconsin.

Like Donald Trump, whose fundraising committee she sits on, Hendricks has come under fire for failing to pay her taxes despite a massive fortune. For example, she paid $0 in state income taxes four of five years from 2010 to 2014. Hendricks has also been part of the Koch Network of billionaires trying to secretly influence U.S. elections, in addition to her notorious turn in a documentary video in which she urged Scott Walker to crush unions and push the misleadingly named "Right to Work" bill into law in the state.

Reform America Fund has run a slew of ads, one apocolyptic ad criticizing the Joint Comprehensive Plan of Action to prevent Iran from developing nuclear weapons and another attacking Feingold's vote for the Affordable Care Act, which bars insurance companies from excluding millions of Americans with pre-existing conditions, allows for family coverage of young adults, and extends health insurance options to more than 20 million previously uninsured Americans. The group has reported $888,000 in this final week.

A new attack ad from Reform Wisconsin Fund similarly claims that Feingold supports "funding terrorists" because he supports the Iran nuclear weapons prevention agreement. The agreement was credited for creating a "safer world," by major papers, though it has been attacked relentlessly by the rightwing, some of whom have affirmatively urged war with Iran. Reform Wisconsin has reported $630,000 in this final week.

Johnson, who was described as a "model Senator" at a Koch summit, has been propped up by the billionaires' network super PAC, Freedom Partners Action Fund, as well as their dark money 501(c)(4) Americans for Prosperity operation and its Wisconsin arm.

Freedom Partners came in early running misleading ads that were pulled from three TV stations. Now, the Kochs' Americans For Prosperity launched their second major ad blitz for Johnson November 1, dropping $1.1 million this week to tie Feingold to President Obama and Hillary Clinton, calling the trio's support of the Affordable Care Act as a "Flood of Lies." See ad here.

The Senate Leadership Fund is a super PAC run by Steven Law, former chief of staff to McConnell, and president of Rove's dark money groups. The fund is dropping $2.2 million this week to paint Feingold as anti-veteran. See ad here:

A coalition of veterans as well as the veterans group Veterans and Military Families for Progress have endorsed Feingold, and Votevets released a scathing report on Johnson's record.

The Senate Leadership Fund is one of the top spenders in this election cycle as the GOP scrambles to hang onto the Senate in the face of poll numbers giving Clinton the edge. They have spent more than $75 million on independent expenditures, according to Open Secrets. Its largest donor is casino magnate Sheldon Adelson, whose newspaper acquisition--the Las Vegas Review--is one of the only state papers in the country to endorse Trump, along with the national paper of the Ku Klux Klan this week.

The National Republican Senatorial Committee, the campaign committee of Senate Majority Leader Mitch McConnell and Senate Republicans, dropped a planned ad buy last month when Johnson's polling was tracking as further behind. As the race tightens, the group has suddenly come in with a new ad called "Hypocrite," which claims that Washington, DC, changed Feingold. Politico reports that the NRSC will spend $1 million on the ad. See ad here.

The U.S. Chamber of Commerce came in on October 28 with a $600,000 cookie cutter ad buy painting Feingold as "the deciding vote on Obama care," a charge that has been ranked "mostly false" as it has been used against many of the 60 senators who voted to advance the Affordable Health Care Act in 2010. See the ad here.

Club for Growth and Richard Uihlein on Taxes

The "Club for Growth Action Fund," a registered super PAC that is part of the Club for Growth operations, has launched a number of ads against Feingold that are bankrolled by Wisconsin billionaire Richard Uihlein, one of Scott Walker's top donors. This $800,000 ad run started October 13 and slams Feingold on tax increases. See ad here. Mega-donor Uihlein, who told the Milwaukee Journal Sentinel that the Johnson-Feingold contest is among the most important U.S. Senate races, has given $1 million to the super PAC since the September 2, 2016. The co-founder of ULINE, who got his start at his father's multinational corporation, is financing at least two other super PACs running negative ads against Feingold.

On the flip side, there is comparatively little outside money in support of Feingold. While Feingold holds an edge in actual campaign ads, it appears that outside groups backing Johnson will dominate the Wisconsin airwaves in the last days of the campaign.

Senate Majority PAC, the super PAC for Senate Democrats run by Senate Minority Leader Harry Reid, made the surprise announcement of a $2 million ad buy in Wisconsin on October 28 in response to the flood of money coming in against Feingold. Their latest ad attacks Ron Johnson for "working for Wall Street, not us" and voting for "tax loopholes for companies that ship jobs overseas." See the ad below.

LCV Victory Fund (the Super PAC arm of the environmental group League of Conservation Voters) announced a $530,000 ad buy on October 31. The super PAC is renewing three of its earlier ads targeting Johnson for climate change denial and his ties to the Koch network and big oil industry. The new ads slam Johnson for climate change denial, for being backed by the Koch Brothers and fossil fuel interests. Johnson has consistently made statements attempting to cast doubt on the science behind climate change including in 2016 "the climate hasn't warmed in quite a few years. I mean, that is proven scientifically," Johnson said.

The 501(c)(4) League of Conservation Voters, its super PAC LCV Victory Fund, and the Environmental Defense Action Fund have been hitting Ron Johnson with negative ads all cycle. Their ad total at least $3.7 million spent since July 2015.

The Humane Society Legislative Fund began a $400,000 TV ad buy for Feingold on October 26 according to FEC filings. The ad features a German shepherd talking about Feingold's record on humane treatment of animals and wildlife conservation. You can see the ad here.